Why Is Healthcare So Expensive?

Because most of what you are paying for isn't actually healthcare.

The Zman had a good post yesterday about Labor Day and the shifting world of the American workforce: Labor Day Thoughts. One of the things he talked about was the way that the competitive sectors of the economy are endlessly squeezed to be more profitable while the non-competitive sectors swell with workers.

In order to support the swelling army of otherwise useless people in the media, academy and government, it means extracting ever more from the laboring classes and their private employers. The typical private sector worker is under relentless daily pressure to do more with less.

Compounding this is the natural response to these pressures, where workers accumulate in areas shielded from competition. Government grows, as a jobs program and as a way to maintain support for government. The massive growth in government, education and now health care are responses to the relentless competition within the so-called private sector. Skip to the bottom of this post, where there is a graph showing the growth in administrators within the American health care industry.

What is amusing is that yesterday morning before this post came out I was talking to my wife about the issue of administrative costs in health care. The nearby mid-sized city of Fort Wayne used to be a large industrial hub and while we still have some big industrial employers, most notably a large General Motors plant that is fortunate to produce full-size pick-up trucks, it is pretty interesting to look at the largest employers in Allen County (from a report by Indiana Tech): 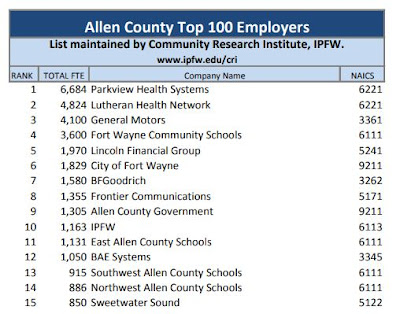 The top two employers are hospital systems, Parkview Health, which is the largest by far and boasts on their website of having over 12,000 employees and Lutheran, with giant campuses that bracket Fort Wayne on the north and south respectively. The GM assembly plant in Roanoke comes third. Then Fort Wayne schools before a big drop-off to one of my former employers, Lincoln Financial Group which used to be based in Fort Wayne before relocating their executive offices to the Philadelphia area. Then the city of Fort Wayne comes in 6th, followed by a tire plant and a cable/internet provider. Then the Allen County government and IPFW (Indiana-Purdue Fort Wayne, now just Purdue-Fort Wayne) and East Allen County schools (everything east of Fort Wayne). BAE Systems, a defense contractor, is 12th followed by two more school systems that cover the other sides of Fort Wayne and finally Sweetwater Sound, a huge music instrument business. So of the top 15 employers, 9 are schools, government or hospitals and only 6 are for-profit, and the two big hospitals alone have more employees than all six of the for-profit companies in the top 15 combined (locally).

That is all very interesting but what does it have to do with why health care is so expensive?

Something the Zman mentioned in passing is the crux of the issue and it is exactly what I was talking to my wife about. He wrote:

Skip to the bottom of this post, where there is a graph showing the growth in administrators within the American health care industry.

So I did and came to this post: Uwe Reinhardt on High US Health Care Costs and it is a pretty interesting read. The graph Z referred to is reproduced below: 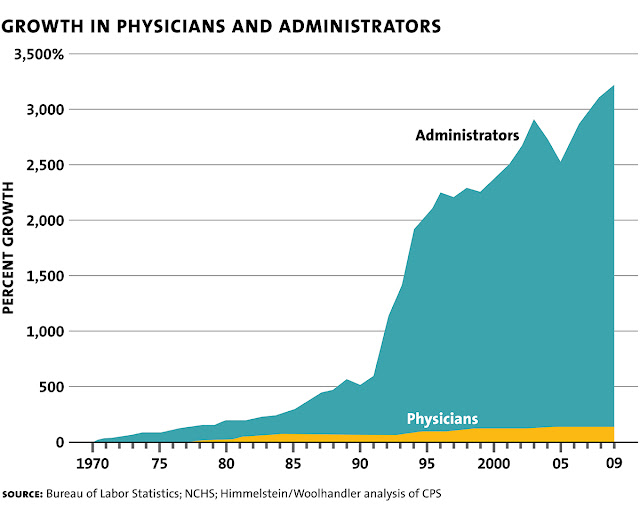 What I had commented to my wife was that when you look at these huge health care complexes, like Parkview in Fort Wayne, you have to consider how few actual doctors and even nurses work there. This is something I have seen personally. My dad is a retired family doctor and when he and his partner first started practicing medicine together, there were the two of them and maybe 5 support staff including a nurse. That same practice now is full of administrative and support staff to deal with the paperwork, scheduling and billing and they have joined with a larger health system to provide even more administrative support. As the post points out in quoting Uwe Reinhardt, not only is this swelling of the ranks of non-clinical employees never brought up, when Congress does act to "reform" health-care, it simply makes it even more complicated and require more non-clinical staff. The next time you are wandering around in a hospital, look at all of the doors you pass that are non-patient areas. Whole sections of hospitals never have a single patient.

Something similar has happened in "education". The public school system is a gaping maw that devours tax dollars and has an insatiable appetite for more money. Most people dutifully vote to increase their taxes over and over because "it is for the children" and yet what we see from the output would make any rational person question the wisdom of throwing more and more money at schools. A favorite chart of mine from the Cato Institute, back before they went completely insane, is below: 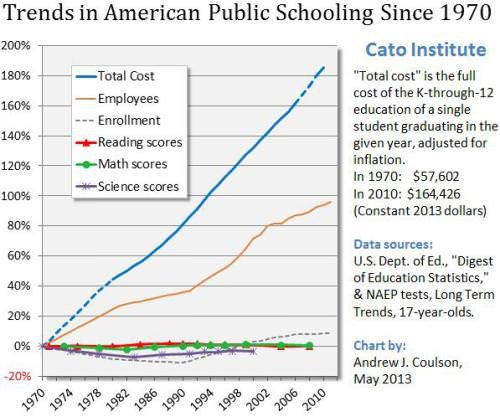 People think that when they vote for more school funding they are getting more teachers, textbooks and classroom technology. What they are really getting are increasingly poor results and more non-teaching administrative staff. My sister has been teaching for 40 years and what she does is basically the same as it was when I was in her classroom in the 80s. The difference is the number of administrators who never teach anyone but get paid fat salaries and excellent benefits to shuffle paperwork around. Public schools are basically a job guarantee scheme for people with education degrees. Teaching kids is pretty much a secondary task at best and an inconvenience at worst.

The article I linked to above is pretty interesting. It reinforces what I was already assuming, health care in the U.S. is so expensive because so much of our health care spending goes to stuff other than actual health care. Unfortunately that doesn't show any signs of changing and if anything will simply get worse. As the saying goes, if you think health care is expensive now, just wait until it is free.
Posted by Arthur Sido at 10:11 AM