As I have stated before, Trump is completely untrustworthy when it comes to firearms and the 2nd Amendment. As a billionaire, he will always be able to provide armed security for himself, his family and his properties. If his family wants to go trophy hunting in Africa or shoot trap at a private club, they will always be able to. Being wealthy means gun laws don't matter, which is why 145 top corporate executives came out recently demanding the Senate "do something" about gun violence, or at least the relatively rare gun violence that gets so much news coverage rather than the generic black on black gun violence that occurs on a daily basis.

However Trump does have a certain utility. I am in the camp that says that Trump will be the last Republican President, win or lose in 2020. The demographic shift cannot be overcome without altering the basic, although rarely followed, framework of what it means to be a Republican to the point that it no longer even pretends to be "conservative".

What this means is that gun control is going to only get worse. For a while gun control has been radioactive for Democrats who still relied on working class whites to win national elections but as 2016 and the political scene since has shown, the Left doesn't care about working class whites and is content to build a coalition based on the super wealthy oligarchs, liberal white apparatchiks and the growing number of non-white voters who have ingested a lifetime of racial resentment. That means....

Worst case scenario, there is another high profile, and not at all a false flag, "mass shooting" involving a white guy and an AR-15. Trump does the dumb thing and enacts some B.S. knee jerk response that pisses off his base who doesn't show up in 2020 and he loses to Elizabeth Warren, dragging the Congress down with him. Warren goes on the warpath and starts enacting executive orders to ban and confiscate guns.

Best case scenario, the Dems nominate crazy Joe Biden who continues to implode into early stage dementia and maybe as a bonus gets handsy with a teenager on camera. Trump wins re-election and helps Republicans hold the Senate and retake the House. The total ban and confiscation train gets delayed for a few years.

Most likely scenario, Trump loses a close election, the House stays fairly static and the GOP holds the Senate by a razor thin margin. Milder gun control measures start to pass the House immediately and the cowardly GOP in the Senate passes them, probably with some transparently bogus assurances of getting something in return, promises that never materialize. By 2024 Democrats take permanent control of both houses of Congress and a perpetual hold on the Oval Office. They add seats to the Supreme Court to create a liberal super-majority that will rubber stamp gun control measures.

Under any scenario not involving mass bloodshed, open revolt and civil war, it would be safe to assume that by the middle of the 2020s it will be impossible to buy most commonly sold firearms, ammunition will be likewise difficult to obtain and illegal to import and ship, "high capacity" magazines will be outlawed as will private sales of firearms. Red flag laws will be universal at the Federal level, leaving the few remaining gun owners at the mercy of the small number of "mental health" workers who themselves are the least mentally stable subset of America. The big package carriers (UPS/USPS/FedEx) will stop shipping firearms even for licensed FFLs, making it almost impossible to run a gun store. Companies manufacturing and selling firearms components that can be assembled into a working firearm will get shut down. As firearm sales dwindle away, companies making accessories will die out. What is Magpul going to make when you can't get new AR-15s to accessorize and you can't sell 30 round PMAGs?

Get the picture yet?

I'll spell it out. What I am saying is that whatever you have in the way of firearms and ammunition, components and accessories, when you ring in the New Year on December 31, 2024, is all you are ever going to have.

Right now a lot of people are worried but we are also living in what I have described as the Golden Age of Gun Buying. I can go online and find just about any legal firearm available in America from multiple sources who will sell me a gun and ship it, often for free, to a FFL ten minutes from my house. I can get ammunition by the hundreds or thousands of rounds, shipped direct to my door and I can browse the very best deal at will including some of the same calibers that Wal-Mart has decided to stop carrying for less than $.20/round which is cheaper than Wal-Mart anyway and doesn't require the degrading trip to one of their stores. You can get reliable magazines, likewise dirt cheap, delivered. Any accessory you can imagine, same thing. Because it is so easy and relatively inexpensive to get whatever you want, far too many people spend gobs of money pimping out their tactical rifles instead of stocking up on more practical items. Sure you can get a nice M-1 Garand for $1300 or you can get an AR-15, a dozen 30 round mags and 5000 rounds of ammo. Which is more practical?

The reason we are in this Golden Age is that Trump won in 2020 instead of Hillary. If she had won, there would already be a ton of restrictions in place and executive orders being contested in the courts, courts which would look very different. If Hillary had won, two of the existing justices would be far, far Left instead of moderately conservative (Gorsuch and Kavanaugh). Ruth Bader Ginsburg would probably have retired and been replaced by Barack Obama or a 30 year old transgender freak. Trump's win has turned out to be terribly disappointing in many ways but in one very specific way it has been an incredible gift.

It is a very precious and finite gift: time. Maybe a year and a half, maybe five more years. Or perhaps less.

Many of us seem to be taking advantage. Not me of course, as guns are evil and naughty and cause acne. But a lot of other people. Here is the latest background check chart from the NSSF. 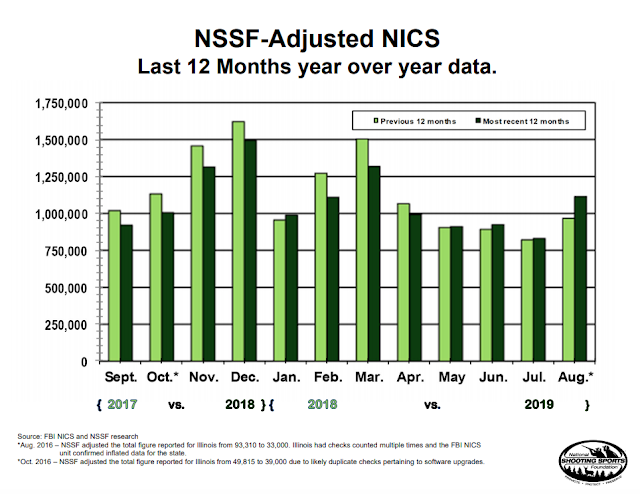 Background checks trended way up in August over last year but look at that chart for a pattern and what you see is that on average every month in America there are a million background checks performed, and most successful background checks represent a new firearm being purchased by a private citizen. Even in the relatively slow sales of the Trump administration that works out to north of 20 million new guns in private hands in the last two years. I expect that to only ramp up, especially if it looks like Trump is going to lose in 2020. So people are paying attention. I hope those 20 million new guns represent 20 million new gun owners instead of a few people buying a couple of guns a month but either way it has to scare our would-be commissars.

You have only so much time left. I would even suggest that while you can always get canned and freeze-dried foods, your window for firearms and ammo is rapidly closing.

Your household budget should reflect this reality.
Posted by Arthur Sido at 7:07 PM