That Is Kinda The Point

Back in the day, liberals liked to pretend that they had the monopoly on being intelligent and educated. They were the political movement of "science and reason", unlike those knuckle-dragging conservatives always banging on about creationism, denying "climate science" and hating the gays.

Fast forward to today. The Left today is a religious cult, worshiping female genitalia and killing babies as a sacrament, demanding people believe you can change genders on a whim. The believe in Russian warlocks casting spells on voters and a clearly deranged woman claiming Brett Kavanaugh touched her boobie when they were drunk in high school. They claim race is only a social construct on the one hand but demand that we believe that only white people carry a genetic predisposition to be mean to the coloreds.

For people who claim to be the smart ones, they are incredibly dumb.

Nowhere is this more true than when it comes to American history. Exhibit A is an essay from a little weasel of a liberal, Matt Ford, who writes for The New Republic and looks exactly like what you would expect: 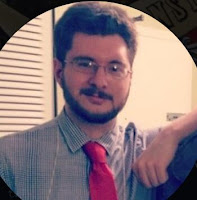 Anyway, Matt is spending a lot of time on the fainting couch these days because it turns out that owners of firearms in America are not only not going to turn those weapons in, they are quite willing to use lethal force to defend their 2nd Amendment rights. Look at the hysterics on display in his story: Conservatives: We’ll Spill Blood to Keep Our Guns

Last month, Democratic presidential candidate Beto O’Rourke proposed a modest solution to the relentless tide of mass shootings: a mandatory buyback program for every AR-15 in the country. The View co-host Meghan McCain responded with a dire warning. “The AR-15 is by far the most popular gun in America, by far,” she told her fellow panelists. “I was just in the middle of nowhere Wyoming, if you’re talking about taking people’s guns from them, there’s going to be a lot of violence.”

Tucker Carlson echoed McCain’s blood-soaked sentiment on his Tuesday night broadcast. “So, this is—what you are calling for is civil war,” he said. “What you are calling for is an incitement to violence. It’s something I wouldn’t want to live here when that happened, would you? I’m serious.” Erick Erickson, a prominent conservative columnist, also warned of tragedy. “I know people who keep AR-15’s buried because they’re afraid one day the government might come for them,” he wrote on Twitter. “I know others who are stockpiling them. It is not a stretch to say there’d be violence if the [government] tried to confiscate them.”

“There would be violence” neatly elides what’s actually being claimed: Some gun-rights activists would murder government officials who try to enforce a duly passed law. This isn’t an extreme viewpoint among such gun enthusiasts. If anything, it’s one of their central tenets.

Uh, yeah. You know you are in for a treat when Matt describes Robert Francis O'Rourke's threat to "buy back" every AR-15 in the country as "a modest solution to the relentless tide of mass shootings". I'll point out once more for fun that rifles are very rarely used in homicides. In 2017 more people were killed with blunt objects like hammers (467) than with all rifles combined (403). The truth of mass shootings, which I assume Matt knows and is simply lying about, is that around 75% of them are carried out by black men and mostly with handguns. Over 50% of all homicides in this country are committed by black men and a significant chunk of the rest are carried out by mestizos. White men, far from being the greatest threat, are statistically wildly underrepresented per capita in all murder and gun crimes. That doesn't stop "Beto" and others from scapegoating white men, the NRA and "assault rifles" which are overwhelmingly owned by law-abiding white guys.

But Matt is undeterred by mere facts. Along with praising "antifa" for fighting "fascism", adopting the Boomer-speak tendency to conflate fascism with "everything I don't like", and expressing outrage that Ted Cruz would describe a group that is regularly engaged in political violence as domestic terrorists, Matt intentionally misrepresents what the people he quoted are saying. Many conservatives are correctly saying that trying to confiscate firearms even if you pretend it is a "voluntary mandatory buy-back" would be met with lethal force but Matt charges headlong into some creepy fantasy about conservatives stalking and assassinating people. It might come to that but that is not what is being talked about. The widely disseminated tweet from a Texas state representative in response to Robert Francis was passed off as a threat of violence but again it was simply a gun owner saying he will not comply with a confiscation plan.

The best part is the end where Matt gets the vapors about the idea of "murdering" civil servants.

It’s debatable whether even the most stringent gun-control measures would prevent mass shootings, and it’s doubtful that those measures would survive the Roberts Court’s scrutiny. But time and time again, these proposals reveal a troubling window into the mindset of the gun-rights activists who oppose them. That, in turn, only makes the case for enacting such measures much stronger. If the main reason you need an AR-15 is to murder civil servants and elected officials, you shouldn’t have it in the first place.

Uh, what do you think that whole disagreement in North America in the late 18th century was all about?

Our nation was founded on shooing civil servants trying to confiscate firearms. 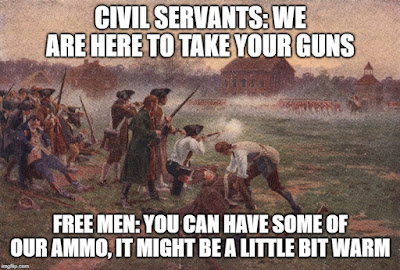 The whole reason we have a 2nd Amendment is to shoot "civil servants" who try to take our guns. It wasn't about hunting or even home security. The men who wrote the Constitution and especially the 2nd Amendment were less than a decade removed from a violent revolution that was kicked off by civil servants attempting to seize firearms from citizens. Do they not teach this in school anymore? Does Matt not have access to Wikipedia?

People don't own AR/AK rifles to use for hunting, although you can. Not to defend your home from burglars, while they will of course work, there are plenty of better options. They own them because they are the best option for a civilian to arm themselves in the event "civil servants" decide to come to your home to seize your property. The Revolutionary War militias didn't arm themselves with spears and clubs, they had the best weapons they could get their hands on. Americans today should do the same.

You won't find many serious people talking about assassinating political figures but you will see lots of pretty mild-mannered people who say the same thing: if the government tries to confiscate my guns, it will lead to bloodshed. The Clinton-era "assault weapons ban" didn't try to take anything existing way, it just prevented the sale of scary looking guns, but you still could buy 30 round mags if they were already in the country. Telling someone that a legal product that is protected by the 2nd Amendment is going to be taken by force? Well that is going to have a predictable and visceral reaction. It did in April of 1775 and it the same will be true in 2019. Don't believe me? Eff around and find out.
Posted by Arthur Sido at 11:24 AM