More From The World Of Professional Care-Givers

How is this for a headline:

You can find lots of videos of daycare workers losing their temper and striking children. That is not what happened here.

The Delaware State Police announced Friday that Dejoynay Ferguson has been charged with Murder 1st Degree. She was committed to the Dolores J. Baylor Women's Correctional Institution on $1-million cash bail. 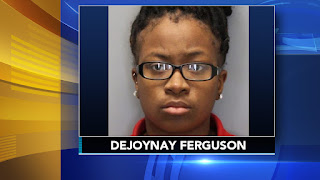 If you Google "cold blooded inhuman soul-less killer", this is the first image result. She was charged with Murder in the 1st degree because of how this went down. More from the story....

According to police documents, video from inside the daycare show Ferguson grabbing the 4-month-old girl from the floor, and putting her on a changing table.

Ferguson is seen putting on latex gloves and then allegedly covering the infant's mouth and nose for more than three minutes.

Police said the child became motionless and unresponsive before Ferguson removes her hands.

Ferguson then placed the child back into a crib, according to police.

After approximately 20 minutes, police said Ferguson told the owner of the daycare that the baby was unresponsive and 911 was called.

She was clearly thinking this through. She put on gloves so she wouldn't leave prints on the baby. She smothered her which I assume doesn't leave a mark. She held her hands over the baby's mouth and nose for longer than three minutes. If you have the stomach for it, try putting your hands on a dolls mouth and nose and time yourself to see how long three minutes is, then imagine that instead of a doll it was a tiny, living baby. She put the baby in a crib so it would look like the baby died of natural causes. Then she waited for 20 minutes before notifying the owner, I assume to make sure the baby was really dead. They said she killed the baby because she wouldn't stop crying, as 4 month old babies sometimes will not, but this has the markings of something she planned out ahead of time.

The coldness exhibited here is frankly something a normal human can't even imagine. We have had 8 kids that used to be small babies that sometimes you couldn't console. It is frustrating but this wasn't even her kid. The parent would be by later to pick her up, or you could go home for the day or just quit your job but to smother a 4 month old to death allegedly because it wouldn't stop crying? I wonder what the ladies in the Dolores J. Baylor Women's Correctional Institution will think of a 19 year old that murdered a 4 month old? I am sure they will have a warm welcome for her.

Is that new iPhone or a pair of newer cars in the garage worth it?


Go ahead and put your kids in daycare so you can go be a wage-slave, I am sure they will be in good hands. After all, that new iPhone ain't gonna pay for itself. https://t.co/hTmioNKYVQ
— Arthur Sido (v. 2.0) (@SidoArthur) September 6, 2019

For those of you that choose not to have kids, you should be comforted in the knowledge that people like Dejoynay Ferguson will be providing your "care" in a nursing home somewhere when you are elderly and helpless and no one will be around to care how they are treating you.
— Arthur Sido (v. 2.0) (@SidoArthur) September 6, 2019


Daycare workers are not family. They are paid to care for strange children in difficult circumstances. You can never expect the same care to come from a stranger that you would get from family. Sure, actual family members sometimes do terrible things to their own relations but that is the exception. How often do we hear about step-parents and boyfriends doing terrible things to step-children? Those "step-children" are not their kids and never will be. Just this week I read stories about a 13 year old girl in Australia who was molested by her step-father for years. A five year old little boy in London beaten to death by his mom's boyfriend because the little boy lost his shoe. Just a short drive from me a step-mother strangled a ten year old girl to death. Of course there are lots of kids with loving step-parents or even live-in boyfriend/girlfriend situations. The point is that family is instinctively going to care for family better than non-family. A step-mom didn't hold a newborn moments after giving birth, an experience that creates a lifelong bond between mother and child.

If your plan is to jazzercise and hot yoga your way into perpetual health and think that will save you, think again. All it takes is one unexpected catastrophic health crisis and you can become dependent on care from others, either family or strangers. You can't replace family when it comes to care-giving. Having all the right aesthetics and just the right philosophy isn't going to mean a hill of beans without a family to care for and be cared for. Our fight is for the future, but without children and families what is the point? I don't do what I do for me, I do it for my kids and grandkids. If there isn't a next generation to build a better world for, what is the point?
Posted by Arthur Sido at 11:53 AM