Meth-head Toddler "Beto" Is Coming For Your ARs

Well not Robert Francis O'Rourke personally. He couldn't take lunch money from a 1st grade girl but he sure plans on sending actual men to try to take your AR/AK if you don't allow him to "buy back" a gun the government never owned and do so with your own money.

The whole buy back thing is such a farce. If you are riding your bike and some hooligan stops you, points a gun at you and takes your wallet; opens your wallet and takes all of your money; and finally gives you some of your own money back and tells you he is "buying" your bike "back", that is pretty much the same thing as a "assault weapons buy-back", just a fancy term for stealing your property in return for some of your own money they previously stole from you via taxes. But everyone with an ounce of sense already realizes two things:

One, it isn't a buyback when it is mandatory. It is an unlawful taking and a violation of the Fifth Amendment.

Second, the tens of millions of owners of AR/Ak platform tactical rifles aren't going to turn them in.


Since there is no legitimate reason to vote for "Beto" and the only reason he is in the debates at this point is that the media thinks he is a Spanish speaking JFK, he has to say increasingly wacky stuff to get attention. Last night at the debate he declared that "Hell yes, we're gonna take your AR-15, your AK-47." Again, "Beto" isn't coming for anything, but as President he seems to be saying that he is happy to send law enforcement officers, who I suspect have real criminals to chase, to kick down the doors of non-compliant owners of AR/AK rifles. Gee, I am sure it is a great idea to inflame emotions on all sides and then think that cops are going to cheerfully kick in doors to take weapons from regular citizens that typically are loaded with full metal jacket rounds that can punch through a lot of types of body armor. What a genius plan, sort of like expecting that a fixed wall on your border with Germany will stop them from, you know, just going around it. "Beto" didn't waste any time monetizing his threats of tyranny, you can buy a t-shirt with his statement on it and wear it in public so everyone knows you are a dumbass. 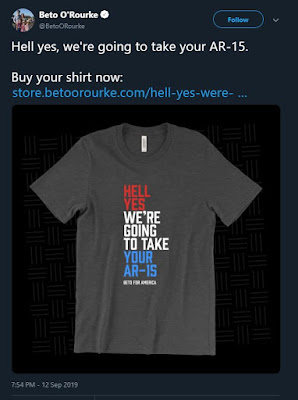 Needless to say, a lot of people didn't take kindly to Bobby Frank O'Rourke threatening to send SWAT teams into our homes to take our property. One Texas state representative, Briscoe Cain, let "Beto" know that such an attempt will not be responded to with tea and crumpets. Of course "Beto", after threatening tens of millions of Americans with having their doors kicked in by armed men, shrieked like a little girl and charged for the fainting couch. 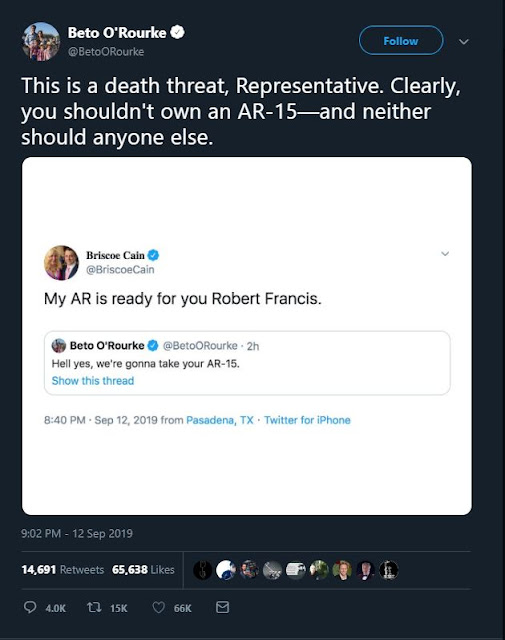 Beto is a clown that no serious person takes seriously but in a way he is like Alexandria Ocasio-Cortez (she seems to have lost some of the spotlight lately). AOC's entire purpose right now is to be the real-life equivalent of a video game "tank", in other words to be able to absorb lots of incoming fire. Beto serves a purpose for Democrats by saying crazy stuff to allow other, more serious Democrats to say slightly less crazy stuff and seem almost reasonable by comparison. Every Democrat contender would love to have a total ban on most firearms but they know that right now doing so is incredibly problematic and confiscation is far more so. You start kicking down doors and people are going to get killed, both gun owners and cops alike, and if a few gun owners get killed by cops in these raids, it is going to get ugly. The Oklahoma City bombing, if you believe the official story, was done in large part as retaliation for Waco and Ruby Ridge. Those two events happened before the internet was widespread and involved some people easily dismissed as fruitcakes and religious fanatics. If some accountant gets shot in his suburban home in a no-knock raid or even worse a little kid gets hit by stray fire from an overzealous SWAT shooter? It will be all over the internet in minutes. The fuse is already very short for many, many people and I think the vast majority of county sheriffs are not going to start sending their deputies into homes to get shot at or to shoot homeowners.

Robert Francis O'Rourke's statement last night was childish and risible but it is a solid reminder of what I said yesterday: If nothing else, Trump bought us some time but the window to purchase firearms, ammo and accessories is closing quickly and once it closes, it won't reopen short of a civil war.

Make sure your household budget reflects this.
Posted by Arthur Sido at 11:22 AM