Our world is awash in "environmentalists". We were all treated to the creepy and tragic Greta Thunberg screeching into a microphone, scolding adults for failing to properly respond to the imaginary threat of global cooling global warming climate change. Of course she is only doing this in the developed world. I wonder what the response would be to a 16 year old white girl screaming at the adults in Pakistan or the Congo? 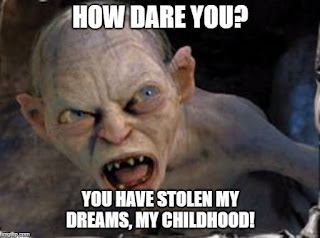 Besides being easily manipulated dimwits, what most "environmentalists" (please assume the quotation marks on future uses of that word) have in common is that they don't actually spend any time in or know much about the environment. They live in large cities or in suburban enclaves. They would be lost in the woods and in a crisis would die of starvation or by being eaten by one of the animals they only know from Disney movies. Caring about the environment is something they signal about on social media and perhaps via a couple of bumper stickers. Try to explain to one of them why it is healthy to occasionally clear cut some forest and their signal gets scrambled because they have no idea what forest management looks like, and can't figure out why there are all of those devastating fires in California. They have never walked from a mature pine stand into a regrowing area of young trees and seen the difference because they never go outside.

The people who really know and care about the environment are not who you think they are. The average American who met my wife wouldn't think she knows anything about the environment. She isn't clamoring about "climate change" or wringing her hands about plastic straws in the sea. On the other hand she went to forestry camp in high school four years in a row and can identify a ton of flora and fauna from trees to insects to waterfowl. She knows a lot about how to properly manage forests and wildlife. In other words she understand the environment as a real thing, not as some esoteric concept.

The greatest conservationists in our country are people who hunt and fish because they actually spend time in the wilderness and understand how nature works. They also have a vested interest in the environment because they want to keep hunting and fishing and you need a healthy environment for that to happen. Conservationists, like avid hunter John Audubon, seek to conserve nature.

Environmentalists? Well they are like watermelons. Green on the outside but red on the inside.

Most garden variety liberals who fancy themselves environmentalists because they own a Patagonia fleece jacket aren't actual Communists and most of them are too historically illiterate to even place Communism in world history or realize that the Commies killed far more people than the Nazis. But the people who are pushing this nonsense absolutely are. The same is true of the civil rights movement and feminism and pretty much every leftist social movement in the last century.

What all of those various "progressive" movements have in common is that once you get beyond the surface you find that a) the same cast of characters is behind it; b) their goals usually have little to do with the stated goals for public consumption and c) the target is always moving so nothing is ever fixed. It has been half a century since the Civil Rights act. We had a half-black President. Black people as a whole face no tangible oppression and in fact are coddled with things like hiring preferences and affirmative action in education. But to listen to "civil rights" activists, things are worse now than they were during the 19th century.

There are three kinds of people in the "environmental" movement, and these are the same groups in every "progressive" movement.

The average do-gooder liberal or even the conservative that has been guilted into thinking that they are destroying the environment and that they have to "raise awareness" by putting a bumper sticker on their car and sending money to "environmental" organizations.

This is the Al Gore type, the Hollywood elites who fly emission spewing jets from luxury mansion to luxury mansion and attend incredibly lavish events decrying middle class Americans for being wasteful. They are the environmental movement equivalent of race-hucksters like Jesse Jackson and Al Sharpton, people who rely on never solving any problem because it would mean they would need to get a real job.

Behind the scenes are the George Soros-types, international globalist financiers of Marxism. When you start to see these people pulling the levers, you understand that "environmentalism" is just another face of the amorphous but very real international Marxist movement. The faces and names change, civil rights, feminism, refugee relief, LBGTQ rights; but the ultimate goal is the same: replacing the Western model of liberal democracy and individual rights with a Communist system.

This explains why you end up seeing "single issue" groups on the Left always talking about various other issues that they claim "intersect" with their issues. These issues all intersect because they all have a common tactic, undermining Western civilization. Whether it is replacing Western people with third world people who will be easier to control or devastating the engines of Western economic success or trying to destroy and subvert the family, the methods are different but the goal is always the same even if those carrying it out are unaware of it.

This op-ed from the L.A. Times is a great example of what I am talking about: Opinion: Why the youth climate strike has to take on racial justice (HT: The Zman). Here is the snippet at the end:

When the young people striking for climate action demand action on racism and unrestrained capitalism, it’s because they understand that all of these issues are inseparable. Unless we tackle them together, they will defeat us over and over, until it’s all over.

People on the "conservative right" see each issue as an independent topic to be addressed individually. Let's talk about prison reform on it's own and weigh the relative merits of the topic. For people on the Left, these are all interconnected issues that overlap ("intersect") and all have a common goal of a world devoid of white people and operating under Marxism. Notice this line from the op-ed: "seeking economic benefits that are broadly shared". That is the central theme that we keep coming back to and it is what the Left so often calls a "dog-whistle". I am all for economic benefits that are broadly shared, in the sense of people having lots of opportunity to improve themselves and get better paying jobs, but what they are talking about is income redistribution at the end of a gun.

Be sure to understand the difference between conservationists and "environmentalists". People who are seeking to conserve natural resources because they enjoy the outdoors and want a clean environment to enjoy for themselves and their posterity, people who often are hunters and fisherman, bird watchers and the like, usually have a clue what they are talking about. People who are "environementalists" by and large have no experience in the outdoors and are blissfully unaware that they are just tools being manipulated by the international Communist movement. I'll take seriously what an ecologist from Pheasants Forever has to say but the same cannot be said for anyone who talks with a straight face about "climate change".

For an good intro on what utter B.S. most "climate change" doomsayers are pushing, see: The Global Warming Memo They Don’t Want You To See (Okay, I wrote it.)