....still goes out the door of the chopper. 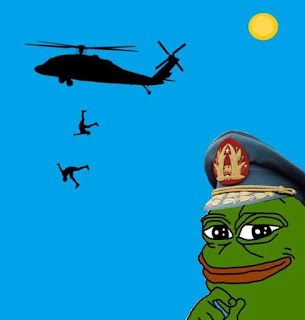 With the fall of the Soviet Union, the liberal democracies of the West assumed we had won. There was talk of the end of history, that the world was now safe for freedom and democracy and we were on an unstoppable path toward ever-increasing prosperity and liberty. Yeah, it seems kind of funny now but no one is laughing.

Communists are a lot like cockroaches. They scatter when you turn on the lights. You can spray them with poison and they keep going. You can even toss them out of choppers and they still keep replicating themselves. 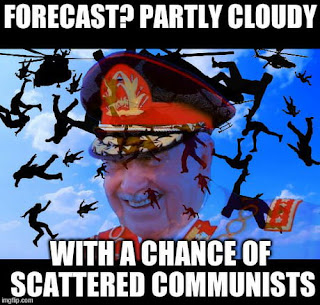 We are supposed to be terrified of all of the Nazis running around but there haven't been a significant number of Nazis since the 1940s. On the other hand, the far more lethal Communists are alive and well and running our media and "education" system. At a recent "Democratic Socialists" meeting we all got a chuckle at the freak show audience getting triggered by people whispering and causing him to experience sensory overload and a different guy losing his shit because someone using the term "guys" to address the audience. Behold the mighty social justice warriors who are going to kick off the revolution! What a lot of people missed was the moderator referring to these crackpots as "Comrade". They know who they are.

A recent post at the Epoch Times, DSA Conference Builds Closer Ties to International Communist Movement, exposes the speakers at a recent DSA conference that were representing far-left and openly Communist organizations overseas. While the Right is deeply fractured in the U.S. and endlessly squabbling and purity spiraling, the Left is allying itself not just in the U.S. but with world wide Marxism. I am not concerned about the purple-haired gender fluid freaks in the Democratic Socialist rank-and-file but if they start importing hardened Communist rebels, either as "refugees" or under the guise of UN "peacekeepers", that is a different story. Communists in the third world have been fighting and killing for a long time, they are not going to collapse into a puddle on the floor if someone misgenders them. They'll probably just gut you with a butter knife.

Communism didn't go away when the Berlin Wall fell, it just morphed and hijacked Western movements, from the "civil rights" movement and feminism to environmentalism and immigrant "rights". The commies play the long game better than we do and they are winning. We are flooded with "immigrants" that come from violent nations that are well versed in revolutions and pretty soon they won't need the limp-wristed white Democratic Socialists.

Whatever your issues with other dissident right groups might be, just remember that the alternative is facing MS-13 thugs and Shining Path guerrillas. There already aren't that many of us and we are going to need all of the help we can get. Ten thousand DR types united are pretty powerful, ten thousand of us all living in our own bunker will be easy meat.

Don't be lulled into a false sense of security, thinking that the other side in a civil conflict will be pushovers. There are hundreds of thousands of hardened, violent people already in our nation who would love nothing more than to shoot some middle-class Americans and every single day more and more cross into our country. Meanwhile our indigenous non-white population is radicalized with anti-white propaganda while enjoying the last vestiges of a society they didn't build. When spicy time comes, don't think it will be 19 year old Gender Studies majors that you will be facing. Be prepared for people who know what they are doing and have no qualms about doing it.
Posted by Arthur Sido at 1:33 PM