This Is Kind Of Confusing

In the world of celebrity-watching and fawning, aka the American media, the Obama's are still treated like royalty. The Hill posted a hard-hitting piece the other day going into depth on what is on Barack Obama's playlist. Good thing we have tough but fair journalism like that to keep the powerful in check instead of wasting time looking into whether his administration used law enforcement to spy on the Trump campaign on behalf of the Clinton campaign. So the media was just giddy this weekend when news broke that the Obama's were in the process of purchasing a modest little place to call their own.... 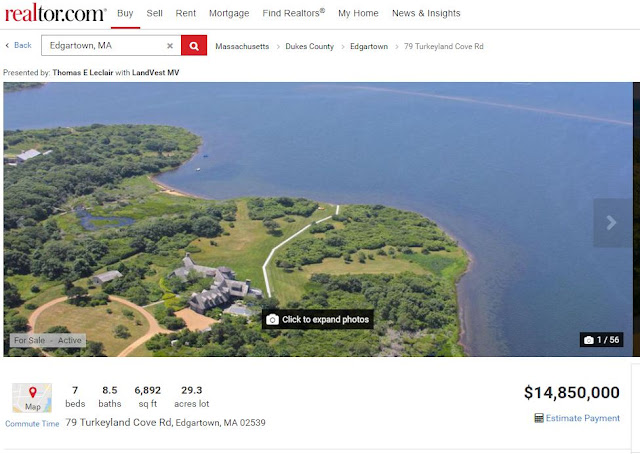 7 bedrooms, 8.5 baths. Almost 30 acres of property, almost 7000 square feet. Viewed from the satellite, 79 Turkeyland Cove Rd, Edgartown, MA 02539, is pretty secluded and exclusive with a long road leading back to a long driveway, easily secured by the Secret Service. It is a beautiful place, the sort of property that only a small fraction of the top 1% of all Americans could even think about owning.

But it kind of confused me a little bit. Barack and Michelle Obama are "progressive" royalty. Leftists in this country revere them and many entertain the illusion that Barack is somehow still President or that he should be President for life. They have clearly supplanted the Clintons as the favorites of Democrats. The Clintons are too corporate, too "moderate", and too white. The Obamas are far more liberal, more hip and of course as a couple are only 3/4 white. However those same "liberals" are always screeching about a few issues that they think having enough Democrats in office will fix and it has me a little confused as I try to sqaure the Obamas being so "progressive" and the newest piece of real estate they are acquiring....

I thought income inequality was a major problem in America....

...but the Obama's new home is listed for almost $15,000,000. What happened to Alexandria Ocasio-Cortez's "New Green Deal" demand that people live in "safe, affordable, adequate housing"? Is a $15 million mansion with 7 bedrooms really "adequate housing" for a couple with two adult kids? $15 million could buy a lot of deserving working class families a modest home of their own.

I thought people deserved to be paid a "living wage"....

....but on Martha's Vineyard there is clearly a system of haves and have-nots. Housing prices are nearly double the national average while wages are around 2/3 the state average. Martha's Vineyard has a small population of extremely wealthy individuals and a much larger population of low paid, often seasonal, workers who work to make sure the wealthy have their every need catered to. It is the same in the Hamptons, in northern Michigan where I vacationed as a child and at the big ski resorts out West. The people who work on Martha's Vineyard could never afford a place like the Obama's and probably can't really afford to live on the island at all.

I thought "climate change" was an existential threat....

...but as Chuck Woolery pondered... 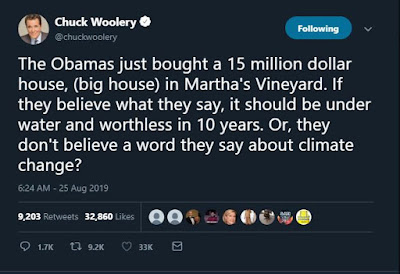 I thought that all white people were inherently racist and unfairly benefited from white privilege and that diversity is our greatest strength....

...but the Obama's, like virtually all successful blacks, choose to live in an overwhelmingly white area. Edgartown, Massachusetts is reported to be over 93% white and less than 2% black. The Obama's could choose to live anywhere they want but they seem to always choose some of the very whitest neighborhoods you can find anywhere. It sometimes seems like the greatest motivation for a black person in America to be successful is so they can afford to not live among other black people. Of course the same is true for white liberals who talk about diversity for others but don't want it for themselves.

The regular old wannbe Commies on social media, the antifa types who used to be the anti-globalist types who broke McDonald's windows to strike a blow against The Man, the aged hippies and idiot college kids who support Bernie Sanders because they think he is going to magically make their $250,000 student loan debt incurred getting a Gender Film Studies degree disappear, all of them think that a socialist nation will be a paradise where everyone will be equal and have all the stuff they could ever want, stuff they don't have now because Trump is keeping all of their cool stuff locked up next to the Ark of the Covenant in some warehouse. They are a lot like Dennis the peasant.

The people who will actually rule in a socialist nation, people like the Obamas, don't think that at all. They see themselves as future Commissars and Politburo members. They will be wealthy just like they are now but the rest of America will be even more poor and the gap between the noble leaders of the glorious proletariat revolution and the actual workers will be greater than ever. Like Soviet-era apparatchiks they will have all of the privileges of rank, nicer houses, the reserved roadways where they are chauffeured to important meetings while the workers sit in snarled traffic. Do you really think that the Obamas are going to give up their fabulous life and $15 million home on Martha's Vineyard in the name of equality? Do you really think Bernie Sanders will give up his three houses and move into some crappy apartment? Fake Injun Elizabeth Warren, another borderline socialist, has a net worth of over $8 million and lives in a house worth around $2 million in Cambridge, Massachusetts (66% white, 15% Asian). You think she will move into some Party provided "adequate" housing apartment? Puh-leeze. Having gotten a taste of the privileges of power, I guarantee that Alexandria Ocasio-Cortez is not going to return to being a tavern wench shaking her ass for tips. She sees herself as a future ruler of a multicultural socialist nation.

It is not surprising that the Obamas don't want to live among their fellow blacks. They want all of the privileges and benefits of living among whites while still being able to get rich bilking money out of rich white liberals. They sent their daughters to the exclusive Sidwell Friends School where many of the glitterati in D.C. would love to send their children. Sidwell brags that their student body is "47% Students of Color", a rather vague statement, and as their Instagram account shows, the "color" of their "Students of Color" is not black or brown, but Asian (which isn't a color as such).

33 kids in the class of 2019 and two appear to be black. There are several East Asians and one girl looks South Asian but that still isn't half, so I am guessing there are a bunch of Jewish kids in the school that get called "students of color" or maybe the upper grades that are more academically rigorous are skewed more white/Asian than the lower grades. Again, that is the Obama's business to send their kid to an overwhelmingly white/Asian/Jewish school with an annual tuition of almost $45,000. But don't tell me that "diversity is our greatest strength" while aspiring to live apart from that diversity.

Barack and Michelle Obama can live wherever they want, assuming they actual live together as is normally understood in a marriage which I seriously doubt. Bully for them being that insanely wealthy while Barack has never had a real job in his life. Just kindly stop yammering about how terrible income inequality is and how diversity is so awesome when your hero and heroine live in the exact opposite manner. Thanks in advance.
Posted by Arthur Sido at 12:00 PM