The Right To Bear Arms, The Tenth Amendment And Federalism

"A well-regulated militia, being necessary to the security of a free state, the right of the people to keep and bear arms, shall not be infringed."

Please note, there is not an asterisk next to the 2nd Amendment that provides reasons why shall not be infringed really means it is OK to infringe. 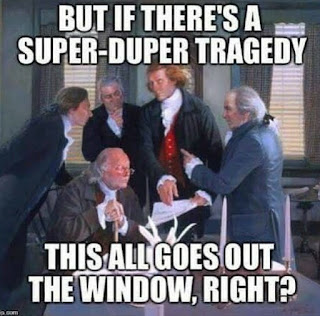 There is no part of American law that is more contentious than the Second Amendment to the United States Constitution and nothing is more bedeviling than the words "well-regulated militia". Because we live in the same country 225 years later and the language we use and our ability to understand complicated concepts has also changed, people today read the words of the 2nd Amendment and find it confusing. Some people take the apparently plain meaning, reinforced by contemporary writings, that see the 2nd Amendment as guaranteeing the individual right of the people to keep and bear arms, focusing on words like "shall not be infringed". Others claim that the most important words of the 2nd amendment are "a well-regulated militia" and interpret that to mean that only officially government sanctioned groups are covered by the 2nd Amendment.

What makes this even more confusing is that we don't have a militia today. We have the National Guard but that is an offshoot of the massive standing army, something else that would infuriate the Founders. The militia was not a semi-professional military force that could be called up and sent to fight for Israel for freedom in pointless overseas wars, it was just the everyday citizenry, people like me, many who never served officially in the military. Then there is the problem of the word "militia" that carries the connotation of scary right-wing domestic terrorists, thanks to Oklahoma City and the militia movement.

It is especially noteworthy that there is not and never was a federal militia. The militia is a state and local issue. The Founders were understandably very leery of standing armies. Even a century later in the Civil War, the soldiers were organized according to their states.

So the issue of the militia and what that meant was left to the states.

That brings us to the most often ignored amendment in the Bill of Rights, the Tenth Amendment. A significant number of people (although nowhere near a majority on the street) could give you some of the basics of the First Amendment, at least that it talks about speech and religion and the press, and many know the Second Amendment is about guns. I doubt one in a thousand would know the Third Amendment talks about quartering soldiers or why that was an issue. The Fourth and unreasonable search and seizure? Fewer yet. The Tenth? I doubt you could find anyone on the street that wasn't a pretty die-hard conservative that could tell you what the Tenth Amendment says:

"The powers not delegated to the United States by the Constitution, nor prohibited by it to the states, are reserved to the states respectively, or to the people."

Basically, if the Constitution didn't specifically grant to the Federal government the oversight of an issue, it properly remained with the states or the people. That is how it was designed, but obviously that is not how it is working today. The Second Amendment provided that no law would be passed that would interfere with the right of the people to keep and bear arms, and it left the issue of what that looked like to the states.

So what do the states have to say about the issue? Let's look first at my state of Indiana. According to the Constitution of the State of Indiana, effective 1851, Article 1, Section 32:

"The people shall have a right to bear arms, for the defense of themselves and the State."

Indiana is hardly alone in this. The USCCA lists the gun laws for each state and the applicable state Constitution section regarding the bearing of arms. So for example, our neighbors to the east, the Constitution of the state of Ohio where I was born and raised, has this to say in Article 1, Section 4:

"The people have the right to bear arms for their defense and security; but standing armies, in time of peace, are dangerous to liberty, and shall not be kept up; and the military shall be in strict subordination to the civil power."

Again, The People have the right to bear arms for their defense and security. Nothing about hunting or target shooting. Our neighbors to the north in Michigan, a state we lived in for many years, says this in their Constitution, Article 1, Section 6:

"Every person has a right to keep and bear arms for the defense of himself and the state."

Every person, The People, have a right to keep arms to defend themselves and the state. Our neighbors to the west, home of the shooting gallery known as Chicago which has very restrictive gun laws, has this to say in the Illinois Constitution, Article 1 the Bill Of Rights, Section 22.

Subject only to the police power, the right of the individual citizen to keep and bear arms shall not be infringed.

That is a little more vague ("police power"?) which is a backdoor way to regulate what Section 22 says, that there is an "individual right" for citizens of Illinois to keep and bear arms. So I would begrudgingly say that based on the tenets of federalism and the Tenth Amendment, Illinois has some capacity to regulate guns under the amorphous "police powers".

Even states like Oregon have very similar sounding state Constitutional protections for keeping and bearing arms, as do many of the original colonies. Virginia has some of the same language about "well-regulated militia" as the U.S. Constitution. Massachusetts invokes the idea of "common defense" which could mean a lot of different things. Georgia guarantees the right to keep and bear arms but also provides for the "power to prescribe the manner in which arms may be borne." but the New Hampshire Constitution reads:

"All persons have the right to keep and bear arms in defense of themselves, their families, their property and the state."

Nothing about the militia or regulating the bearing of arms. Connecticut in Article 1, Section 15 says:

"Every citizen has a right to bear arms in defense of himself and the state."

"The right of the citizens to bear arms in defense of themselves and the State shall not be questioned."

Hell, in PA you can't even question it! Delaware, Article 1, Section 20:

"A person has the right to keep and bear arms for the defense of self, family, home and state, and for hunting and recreational use."

So protection of self, family and home as well as hunting and recreation. Very comprehensive, I liked that one. Rhode Island, Article 1, Section 22:

"The right of the people to keep and bear arms shall not be infringed."

Short and sweet as befits the tiniest state.

On the other hand, some of the original colonies like New York, Maryland and New Jersey have no mention of a right to keep and bear arms at all, perhaps because they assumed the 2nd Amendment would suffice.

Third, when you add in the Tenth Amendment, it is clear that Federal firearms regulations are inherently unconstitutional, in the sense of being contrary to the Constitution rather than the contemporary definition of unconstitutional meaning whatever a majority of the court says on any given day.

In the real world, this doesn't mean much because the Feds still feel free to create whatever arbitrary rules about keeping and bearing arms they see fit, prohibitions on them doing so notwithstanding, and furthermore they have all sorts of groups from the FBI to the BATF who will politely shoot you, your wife with a baby in her arms and perhaps even burn your children alive if you argue. In other words, this is just an academic exercise. It ought to give you some food for thought. Firearm regulation at the Federal level is a clear and unambiguous overreach by the Federal government, in open violation of the Constitution but given bogus legal cover by the Supreme Court.

Each day we drift further away from the intent of the Founders and as we replace heritage Americans with a historic tie to things like individual liberty with people who are here for the gibs and don't know anything other than despotic narco-state socialism, that is only going to accelerate. Something to keep in mind when we rebuild from the ashes, let's make sure things are a little more explicit when we form a new legal framework the next time.
Posted by Arthur Sido at 8:00 AM