More On The Future For Boxed Wine Boomers

Earlier this month I posted about, Nshimiyiana Hamzat, the migrant nursing home worker who was sexually assaulting a disabled 50 year old white woman: Angry Cat Ladies: Welcome To Your Future. Then today I saw another lovely story:

Nursing assistant Brayan Cortez is accused of waving a gown at Collins, as his girlfriend and fellow Nursing assistant Jamie Montesa filmed the incident. The caption in the video reads, "Margaret hates gowns" with two laughing emojis.

Here are the pranksters.... 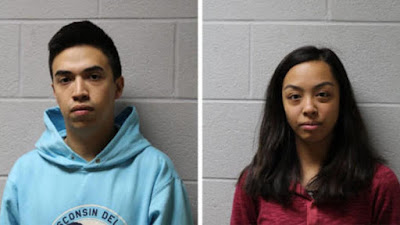 How delightful! More vibrant immigrants doing the jobs Americans won't do! Since most people, even dimwits like these two, aren't dumb enough to film themselves tormenting old people, how much of this happens every single day and no one is the wiser?

We have eviscerated the family so there is no longer family continuity meaning the elderly no longer can rely on their children to care for them, therefore we have a huge demand for low-skilled, low-wage "care" providers to take care of our old folks. But oops! We stopped having enough children to supply the demand for these care workers and the kids we did have ended up with worthless college degrees and six figure student loan balances so they can't afford to work as care-givers. That means importing people to care for the elderly who apparently don't care about the elderly. As a bonus, once they get here they are inundated 24-7 with messages about how terrible and racist white people are and how white people are the cause of all of their problems. Shockingly this stuff follows.

If you don't have a family support structure, you are going to live for decades at the whim of people like this. Maybe you will get good ones, maybe you'll get awful ones, most likely you will get indifferent ones. 2 of the 3 options make for a miserable life after you get old.

But hey, look at all of the cool electronic gadgets you bought and fun vacations you took instead of having kids because they were "too expensive"!
Posted by Arthur Sido at 1:35 PM