The Washington Examiner posted an article talking about the surge of gun purchases after last weekend's mass shootings in El Paso and Dayton: Gun sales surge fueled by first-timers, mostly for ‘concealed’ pistols. Just as additional anecdotal evidence, while I didn't buy a firearm since last weekend, many of the big online retailers of firearms are showing lots of "temporarily out of stock" on semi-auto rifles, especially AK-style rifles. A chart included in the article shows the number of NCIS background checks performed since November of 1998..... 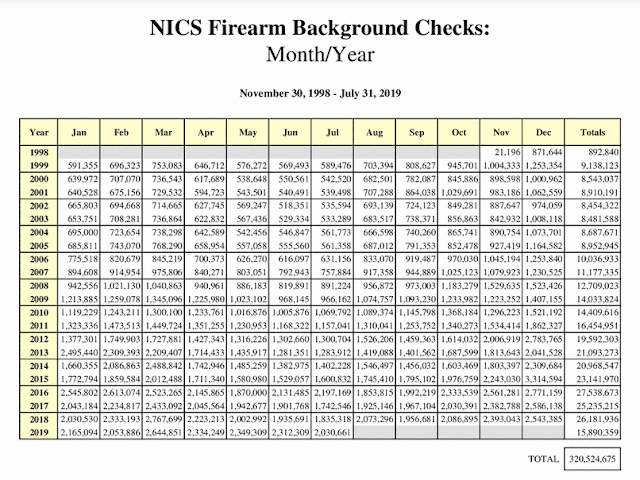 The total in the last 20 years is 320,524,675. Sure a lot of those probably were declined but that it is still a lot of background checks. What that doesn't capture is how many guns were already in circulation prior to November of 1998 and that is a huge number. Also not captured are the firearms that are home-built that don't require a background check. That is an increasingly popular hobby that coincidentally won't stop if background checks are expanded.

So realistically the number of firearms in private hands in America is well north of 400,000,000. Yeah, it should be no problem to ban and confiscate more firearms than there are people in the U.S.
Posted by Arthur Sido at 3:50 PM