Comrade Bernie Sanders Declares War On Half Of America

Everyone knows that the problem in America is white nationalism spurred on by Trump's inflammatory rhetoric. Right? It has nothing to do with daily, hourly even, thinly veiled or not veiled at all calls for political violence from the Left..... 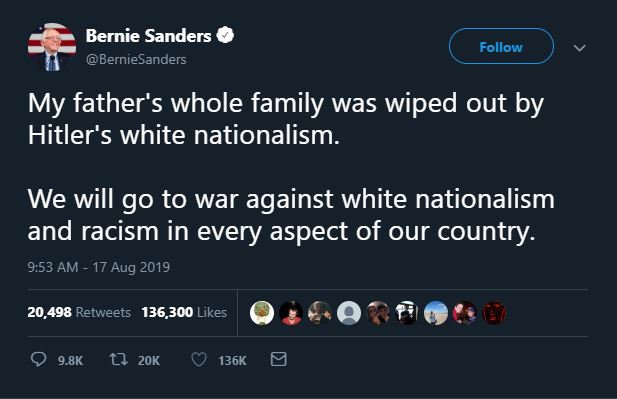 Commissar Bernie is declaring war on everyone he disagrees with. Pretty cool.

First off, white nationalism properly defined and understood describes a desire for an ethnostate, like Israel, a nation that is explicitly for the benefit of and inhabited primarily by white people. Very, very few people are even suggesting such a thing, even implicitly. Trump and most Republicans certainly are not, rather Trump seems hell-bent on importing as many Indian code-monkeys to replace Americans in high tech as possible because it will help Our Lord and Savior The GDP. He uses terms like "millions" to discuss how many new legal immigrants he wants to bring in. That is the exact opposite of "white nationalism". There isn't a single white nationalist in national politics. Nor at any mainstream conservative media outlets. Actual white nationalists are very rare and are mostly relegated to being anonymous on the internet and trying to avoid getting deplatformed. That doesn't stop people on the Left from using terms like white nationalism, white supremacy, neo-Nazi and fascist interchangeably and near universally. Why should it when people on the "right"do the same thing, like "conservative" Congressman Dan Crenshaw. 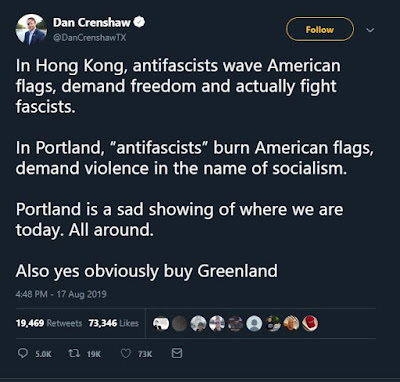 Come on Dan. He has to be smart enough and historically literate enough to know that the Chinese dictatorship that the people in Hon Kong are protesting are not "fascists" in any understanding of the word. They are Communists and have been since Mao. It used to be that being a Communist was bad enough in and of itself, but now Crenshaw is adopting the Leftist trick of using "fascism" as a catch-all for "anyone I don't like". Doing so is convenient but it is intellectually lazy.

The second issue is that Hitler was not a "white nationalist" by any reasonable deifinition. Germany was already pretty much a white ethnostate at the time he came to power. Hitler was not a nationalist as much as he was an imperialist. His vision of a 1000 year Reich was an expansionist vision. Hitler was also a very specific ethnic chauvinist. He favored what he called the Aryan ethnicity. He didn't like a lot of whites especially Slavic people like the Poles and Russians. Part of Hitler's alleged plans included the Generalplan Ost, or Master Plan for the East. This plan called for basically exterminating much of the population of Eastern Europe and the Soviet Union. As many as 85% of Poles were slated for extermination and those are my father's people. The plan was to exterminate or resettle the Slavic people and then to repopulate Eastern Europe with Aryan Germans.

Most people in America think that World War II was just the Holocaust with some random fighting around the edges. That is not accidental, just look at how many contemporary movies deal with the Holocaust versus how many focus on the Asian theater or Africa or anywhere else in the war. America didn't declare war on Germany to liberate the camps, depending on which story you believe most Americans didn't really know about the camps until the U.S. forces stumbled on them near the end of the war. As others have pointed out, the average G.I. storming the beaches of Normandy and driving across Europe would have been far more of a "white nationalist" than Trump or Tucker Carlson. Bernie is completely rewriting history but that isn't surprising. Most of the action in the European theater was between the Nazis and Soviets fighting over Eastern Europe and if those millions of hardened troops from the eastern front had been available in June of 1944, I am afraid the allied forces would have been butchered on the beaches and thrown back into the sea. That conflict was between two bad guys but while everyone hates the Nazis and anyone who had praised the Nazis at any point in their life would be barred from ever running for political office, Bernie Sanders loved the Soviet Union and even honeymooned there, praising the totalitarian Soviets while getting hammered and singing songs with Commies. He also praised the brutal Cuban dictatorship and the Marxist dictator of Nicaragua, Daniel Ortega. The guy who is trying to rewrite history to make Hitler a white nationalist has a fetish for violent, brutal totalitarian dictatorships as long as they are Communists. In wannabe-Commissar Sanders world, Nazis are The Worst People That Ever Lived Cuz Holocaust™ but the far more violent communists are people we should praise and seek to emulate. As a reminder, the various Communist regimes that controlled Eastern Europe, Russia, China and North Korea are some of the most oppressive and murderous regimes that ever existed. The Nazis were in existence for a little over a decade but the Soviets that ruled Russia and the rest of the USSR heaped misery on hundreds of millions of people, killing tens or even hundreds of millions of their own citizens, for most of the 20th century. These are the people Senator Sanders spoke so glowingly of but that is not only not a disqualifier like praising the Third Reich would be, it is actual laudable for many in the increasingly far-left and politically violent Democrat party. It is not coincidental that the Nazis are the singular villain of the 20th century for Bernie but the Soviets were praiseworthy given that Bernie is Jewish and an awful lot of the Bolsheviks were also Jewish.

What we have in America in 2019 is a relatively serious and viable candidate for President of the United States lying and misrepresenting history to try to taint anyone who opposes his policies as a white nationalist and therefore a Nazi. I see a lot of this on Twitter, people claim that "antifa" is "anti-fascist", which isn't even true and therefore if you oppose "antifa" you are therefore pro-fascist. That is obviously a false dichotomy. The Americans in World War II fought the Nazis but they didn't like the Communists either. They were anti-fascism (and the Nazis weren't really fascists anyway...) but they were also anti-commie, so much so that just a few years after the end of World War II we were in Korea fighting Communists. I am not marching with the tiny handful of actual neo-Nazis nor am I marcging and destroying stuff with the slightly larger "antifa" because my brain is more than adequate to choose a third option between "antifa" and "nazi". Such subtelties are lost on the average leftist. While Bernie isn't dumb enough to really think that there are Nazis running around America, his average supporter is and they are itching to spill (or have someone spill on their behalf) some "Nazi" blood. You don't need a brownshirt or a swastika armband, a MAGA hat will do, or voting Republican or owning a gun or voicing any concern about mass immigration. Hell, just being a normal heterosexual married white family with normal white kids who are not taught to hate themselves is enough to get you lumped in with "racists" and "white nationalists" and Bernie is declaring war on you and your family if you don't get in line.

Starting to get the picture yet? They don't see this as a political struggle, they see it as a literal war and you and your family are the enemy. It doesn't take much propaganda to turn your political enemies and even their families into subhuman enemies. Our noble forces in World War II cheerfully firebombed civilians in Germany and Japan, and eventually dropped atom bombs on two Japanese cities full of women and children. People today are even more easily swayed than people were in the 1940's.

People like Jack Posobiec and Charlie Kirk think their signaling and boundary-policing will save them but it won't. This has moved way beyond a political struggle. Bernie Sanders is calling for open warfare against "white nationalists" and "racists" but the Left has declared pretty much all regular white people to be white nationalists and/or racists so he is declaring war on half of America. Reza Aslan is using the language of "eradication" to talk about political opponents. Every day on social media leftists use violent imagery and inflammatory language to talk about conservatives and they don't make a distinction between cucks like David French and actual race realists like David Duke. While there are some people on the right eager for the cold civil war to turn hot, it seems to me that the most eager people to get the shooting started are on the left. We'll see how much they like it when their liberal urban enclaves are under siege from the vibrant diversity that is our greatest strength.
Posted by Arthur Sido at 10:11 AM