A Little Mass Shooting To Start Off The Labor Day Weekend!

You can be sure it won't be the last. In some neighborhoods, the "Friday night lights" are provided by muzzle flashes.

Some "teens" got into a little kerfuffle after a high school football game in Mobile, Alabama last night.

Six were directly shot in the report last night and the rest were apparently injured in the stampede to get away. Six people shot is a mass shooting by any measurement but that number is being updated. Let's give you a little spoiler here before we get into the news of an arrest. The demographics of Mobile, Alabama as of 2010:

That is Detroit level white flight. In 1990 it was around 60% white/39% black. In 2010, almost 51% black and 45% white. I assume the real numbers when revealed in the 2020 census are going to show whites well under 40%, blacks much higher than 51% and even more Hispanics. I am sure there is no connection to Mobile being a violent city.

Quick work by the police as a suspect was arrested this morning, but it also sounds like he turned himself in.

Here is a screenshot of the suspect being led away by the cops. You will be shocked. 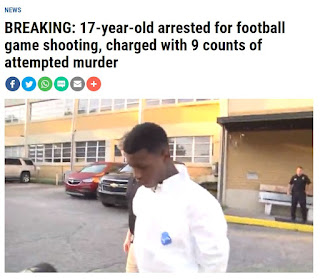 OK, you probably weren't shocked. From the news story:

MOBILE, Ala. (WKRG) Mobile police have arrested a teenager in connection to a shooting at Ladd Peebles Stadium on Friday night. Police have updated the number of shooting victims to nine.

Deangelo Parnell, 17, is charged with nine counts of attempted murder, according to a spokesperson for the Mobile Police Department. He turned himself into police early Saturday morning. Parnell is a student at LeFlore High School.

So now the number of shooting victims is up to 9. I am not sure if that reflects 9 rather than 6 being shot or just the number of people hurt in total. The news story linked above says:

So it sounds like there were actually 9 people shot. I am not sure how three people who were shot were not noticed initially but these things are chaotic. If you click the link above there is a video of the post-game interview in the press box and you can see the crowd scattering in the background while they two guys talking about the game are oblivious. So what happened?

Battiste said this started as a fight and Parnell pulled out a gun and just started “indiscriminately shooting.” Some of the victims have been released from the hospital, but police say they did not know how many. Battiste said that surveillance video clearly shows the 17-year-old suspect firing the shots.

Fights happen in high school. When I was in school at an essentially all white high school in the 80's fights happened. The difference is that we didn't pull out a gun and shoot wildly into a crowd. In fact there was only one incident, it happened before I was in high school, where a student fight led to one student getting his ass kicked and then bringing a gun the next day. The kid bringing the gun was the lone black kid in our school.

This kid is 17 and got into a fight and lacked the basic self-control and ability to think five seconds into the future so he pulls out a gun and starts shooting, wounded 9 people who probably didn't have anything to do with the fight. Now Deangelo is going to spend his high school graduation and the decade after that in a prison. I am sure when he gets out after being assaulted daily for a decade at around 30 years of age, he will become a productive member of society.

Clearly another white supremacist mass shooting. According to Tariq Nasheed, all of the shootings in Chicago this weekend will be the result of white supremacists and "KKK" members dressing up as black men and shooting black people. No, he seriously said that and people seriously agreed with him in the replies. 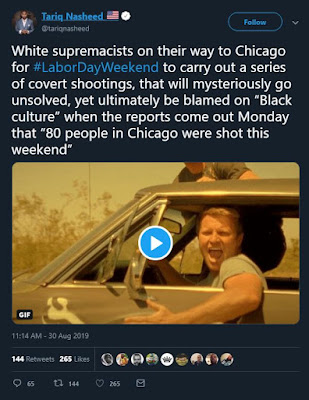 I must have missed the memo about going to Chicago this weekend, and I am super disappointed because I just got a new black guy costume and I have been practicing all week shooting a stolen Hi-Point .380 while holding it sideways into a crowd of people. Dang it!

This won't be reported as a mass shooting anywhere because like the vast majority of mass shootings it involves a black kid with an illegal gun (he's 17) shooting other black people and you can't use a story like that to push to disarm law abiding Americans.

Down the memory hole you go! It is getting crowded down there....
Posted by Arthur Sido at 9:20 AM