Social Media Is The Propaganda Arm Of Contemporary Bolshevism

I finally heard back on my appeal, and no surprise they are not going to lift the suspension. Ever. My 9 year old account gets nuked for an intemperate reply. Here is their email:

Nothing I wrote in the tweet I was suspended for was an incitement of violence. It did not promote violence. It wasn't a threat. It was rude for sure but that is the whole point of Twitter. Anyway, whatever. It isn't like there aren't ways to get around a permanent suspension. Making  new accounts is just a fact of life when you are posting on social media. 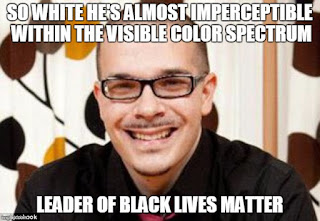 Meanwhile, fake black man and racial grifter Shaun King, aka Talcum X, is lionizing a man who tried to burn down an ICE detention center with "refugees" (aka illegal aliens) inside the building. He deleted some of his tweets, or perhaps was even forced to by Twitter, but people took screenshots: 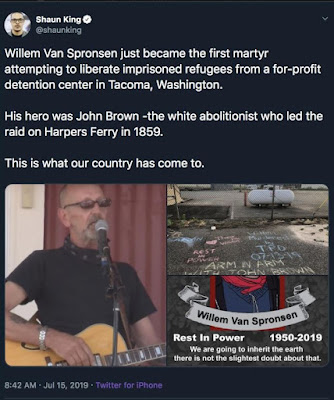 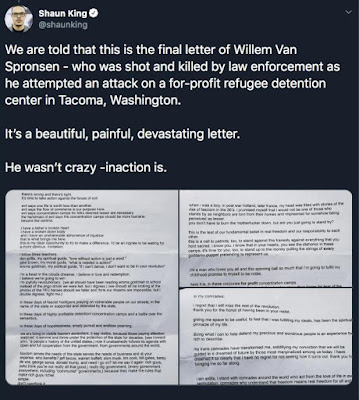 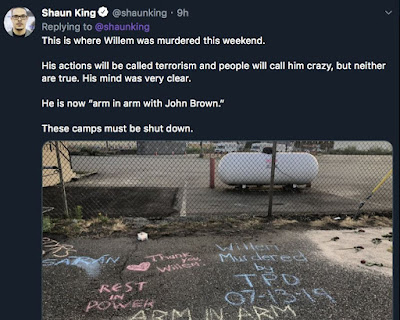 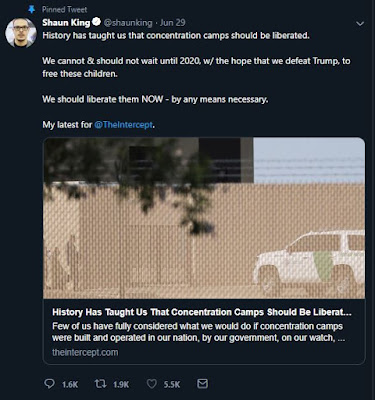 Willem Van Spronsen is what you get when you have a low IQ demagogue like Alexandria Ocasio-Cortez using inflammatory language about a period in history she has no understanding of, speaking to legions of fanbois who also lack basic historical literacy and any ability to use critical thinking skills. Whether or not you uncritically accept the accounts of World War II era concentration camps, it is beyond the bounds of common sense to equate a detention center where illegal aliens who were encouraged to illegally enter the U.S. and upon arriving are provided with food, shelter and medical care while awaiting their bogus "asylum" hearing with the narrative of the Nazi concentration camps.

So this Willem Van Spronsen doofus thought he was "liberating a concentration camp" as if he were fighting actual Nazis holding Jews in camps as opposed to American law enforcement agents detaining in more than humane conditions people who willingly came to this country illegally. This guy brags in his manifesto about having a "ghost gun" and "six magazines" but apparently didn't manage to use his firepower to shoot back. He was just gunned down like an imbecile making a futile and silly gesture. Good job!

- First, many on the Left are deathly afraid of Trump being re-elected. I have serious doubts but they are scared that Trump will win in 2020 and they are already setting the stage to operate outside of the system if he wins again.

- Second, there is an understanding on the Left that a Trump win in 2020 will signal the need for a violent response. Having failed to defeat Trump and by proxy his white voting base in 2016, having failed to magic up some "collusion" evidence, having failed to advance an "impeachment" agenda in spite of winning the House, the Left is out of patience. The thought-leaders on the Left having been whipping up their jihadi to a fever pitch non-stop for three years and they can't hold the lid on much longer.

If Trump wins re-election in 2020, regardless of the margin of victory or the "popular vote", the Left will not accept the results. They can't. People like AOC and much of the media have been using language that invokes movie-based images of cartoonish villains like Amon Goeth to people that only know World War II from Schindler's List.

To these people, Trump being elected President in America is like Hitler being elected chancellor in Germany and ushering in the Third Reich. It is absurd of course but they don't understand that.

These are the sort of linguistic games politicians have played for a long time. The difference now is that people are too dumb to know they are games. Nancy Pelosi seems to understand that her younglings are getting out of control and threatening to spook the electorate into re-electing Trump. Nancy and Chuck Schumer aren't dumb. Evil, yes, but not dumb. They use this sort of language carefully and purposefully, like a mechanic choosing the right wrench. AOC is like a crazed homeless person taking that wrench and attacking random passerbys.

Shaun King isn't going to storm some ICE detention facility. He is a grifter and more to the point he is a pussy. He just says this sort of stuff for social media clout and doesn't care that it inspires his low IQ, unhinged followers into taking action. All he cares about is keeping his hustle going pretending to be a militant black radical instead of a manipulative white guy avoiding real work.

As an aside, it is pretty smart for the Left to demonize, dox and attack rank-and-file law enforcement when they are going to count on rank-and-file law enforcement to carry out their gun confiscation schemes. I am sure that cops are going to cheerfully and enthusiastically charge through doors to take guns away from heavily armed civilians at the demand of people who have been slandering them as racists and jack-booted thugs for decades. Right....

So Shaun King lionizes a terrorist, says he was a "martyr" and was "murdered", and encourages Lefties to arms themselves and sends his followers to LARP as soldiers "liberating concentration camps". His account is in good standing, he still has his blue checkmark. I use the word "sodomite" and get banned forever. Nothing about this is surprising or even very upsetting. Twitter and most of social media is enemy territory that we operate in on the rhetorical battlefield knowing that we are all in danger of being shut down at any moment, for any reason, and as such we should all be planning accordingly. Social media is the single most significant opinion mover in the West right now and it is openly hostile to heritage Americans. Facebook recently updated their "community standards" in a way that allowed for threats of violence against "dangerous individuals", and although they modified what they said, the intent is still the same: you can use twitter and Facebook to agitate for violence against people on the Right as long as you are careful about it.

Twitter, Instagram, Facebook along with Google and most other tech companies are your sworn enemy. Keep that in mind when using their platforms and never let your guard down.
Posted by Arthur Sido at 3:32 PM