Ladies And Gentlemen I Present: The United States Congress

Around 80% of Americans at any given time have a negative view of Congress, based on polls measuring Congressional approval. Oddly enough, we keep re-electing our own Congressmen so the disapproval is of other people's Congressmen. The 20% of people who approve of Congress are clearly idiots, our "representatives" are for the most part a pack of narcissistic, bought-and-sold buffoons.

However, as in any large group there are people who stand apart. Some for being well above average and other for being well below average. In Congress this as skewed heavily toward the below average. Most of us are familiar with imbeciles like Maxine Waters and Ilhan Omar. Even as dumb as they are, one Congresswoman stands tall above the crowd for being a literal idiot: Frederica Wilson of Florida. Besdies being a legendary dolt, she is also famous for wearing ridiculous hats that make her look like an overdressed rodeo clown. 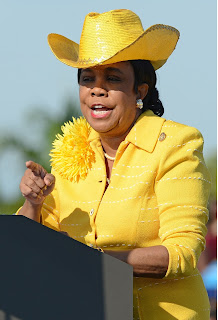 Her latest public embarrassment comes in response to reports that some Border Patrol agents were mocking Congresspeople in a secret group on Facebook. Now that is dumb because nothing on Facebook is private. So making fun of elected officials when you are a Federal employee, including apparently some lewd comments about Alexandria Ocasio-Cortez, and that is not OK because she is totally an intellectual and stuff, is a terrible idea and will have consequences.

As a tavern wench, martinis weren't the only thing she was shaking.

I can see being reprimanded or suspended for making fun of Congress as a Federal employee. But that isn't good enough for the Congressional Cowpoke! She wants them prosecuted.

"Those people who are online making fun of members of Congress are a disgrace, and there is no need for anyone to think that is unacceptable,” Wilson said.

There is no need for anyone to think that is unacceptable. Wut? She isn't even in command of the basics of the English language. If you really have a hankering to weep for our once great nation, you can listen to her here:


In the spirit of full disclosure, in context she is not speaking of just people in general being prosecuted and shut down for making fun of Congress. She is speaking specifically of members of the Border Patrol who made unkind comments about Congress on Facebook. We on the Right need to be cautious of this selective editing stuff and publishing news reports that purport to say one thing when in context they mean another.

Also in fairness you have to consider that Frederica Wilson probably doesn't know what the word "prosecute" means, much less how to spell it.

We are governed, or more accurately we are ruled, by people that are at best dishonest and at worst are barely functional illiterates. This is the case because we thought in some deluded fantasy that we should let anyone and everyone vote, no matter how dumb, and that we should go to great pains to encourage people too dumb and lazy to be inclined to vote to show up in November to cast ballots for people they don't know anything about and make decisions on issues they lack the intelligence to understand on a rudimentary level.

The universal franchise is an enormous mistake and will be the end of liberal democracy around the world and our Republic. May those who rebuild from the ashes learn from our mistakes.
Posted by Arthur Sido at 10:15 AM