There is a very old saying "Those who can't do, teach". Like many old sayings, it is mostly true and it is true nowhere more so than the economics faculty at most colleges and universities.

Economics is a fascinating and misunderstood subject. There is the sort of economics you learn in college, heavy on esoteric theories and statistics, the sort of economics that prepared Alexandria Ocasio-Cortez for a rewarding career as a tavern wench. I took several econ classes in college and they were almost universally useless. The professors had little real world experience and are a lot like meteorologists because they can be wrong 100% of the time and not have it impact their employment. People who had never run a business, made a payroll, talked to an irate customer or worked overtime in their lives were explaining to us why they were the experts on an arcane field of study that had no bearing on reality. They are kind of like Mel Kiper, Jr., the NFL draft prognosticator. Mel spends the whole year predicting which players will be drafted by which teams in which round. He is often wrong but he smoothly gives commentary on whoever gets picked without missing a beat. That is his job and he makes gobs of money doing it. Even if he is correct about who gets picked where, a bunch of those guys turn out to be flops. He has been doing this since 1984. The guy is 59 years old and has spent the last 35 years analyzing an event that takes a couple of hours over the course of a few days once a year. Pretty nice work if you can get it (in fairness, Mel is pretty accurate in the first round but after that all bets are off). 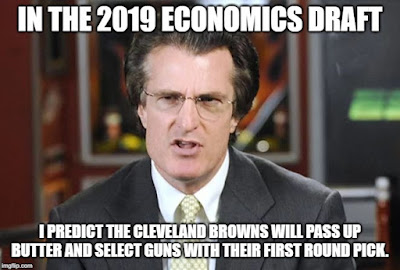 Economists, especially academics, are like Mel Kiper Jr. but without the nice suits and fantastic hair. They talk about stuff in the abstract, completely divorced from actual economic activity. It is a world of charts and arcane knowledge and theories and top heavy Latino girls aspiring to be the dumbest elected official in American history.

Then there is economics in the real world. This is where economics is actually happening, not in theories or charts but in real life.

A big reason why academic economics is so terribly wrong most of the time is the basic assumption. Academics seem to assume that economics is a science, predictable because humans are predictable. If you do this, then people will do that, every time, without fail. In the real world inhabited by real people, economics cannot be thought of as a science because humans are not predictable and we are driven by all sorts of irrational and ever-changing motivations. People going through a divorce will spend $25,000 on a lawyer so they can stick it to their ex-spouse for $1000. It makes no economic sense but people do it anyway.

Our view of money reflects this. Money is supposed to be this very objective thing. An item costs X number of dollars. If you need it you are prepared to pay that many dollars to obtain it. Yet we still tolerate the degrading experience of buying a car where the exact same car at the same dealership can be sold for a price that is thousands of dollars different from one buyer to the next. Buying a car is not a science, it is an emotional decision. I like this color, I want this feature. This car costs more than that car but I am willing to pay the extra because it is cooler even though it does the same thing. Car dealers knows this and exploit people's emotional reactions. The same is true with houses. People will pay more for a house based on things like the color of the house. Who cares if a house is beige or light blue? It doesn't affect the function of the house but emotional preferences are powerful. Spend a little bit to spruce up the landscaping and you can exponentially increase the value of your house even though having a nice arrangement of flowering shrubs instead of a row of evergreens makes no real difference in a house.

We have an almost magical or perhaps even religious view of money. The faith of people in the monetary system is actually quite interesting. We conduct business, perform labor, exchange goods and services, all based on something we never see. Someone can make $100,000 in a year and never have any physical contact with it, not even writing an actual check. John Wilder has a great post up on this topic, one you should check out: Big Swedish Coins, Italian Women Pole Vaulters, and the Future of Money, Part I. People don't think about money, what it means and what it does, other than how much they have and how much their bills are, and because of that we get people clamoring for a $15 minimum wage who have never given a moment of thought to the question of what the ramifications of rapidly and arbitrarily inflating the wages of the lowest skilled workers will have on the rest of the workforce. More money good, me want more money!

I saw the weird relationship we have as a people with our money when I was a bank manager. I remember once when an elderly man came into the branch early in the morning. His wife of many decades had just died. That morning, a few hours earlier. He wanted to get his account switched over into just his name. Her body was literally not even cold yet and his thoughts were on his money. People tell their banker all sorts of stuff. I knew people were heading for divorce long before their spouse or family when they came in to open a new account without their spouse on it and would try to subtly ask about having their statements sent to a P.O. box instead of their home address. Being the one overseeing their money put you in the same company as their therapist or clergy.

On the one hand you have customers obsessing over their bank accounts, and on the other you have employees of the bank who saw money as a hassle, something you had to deal with each day. Can't have too much in your drawer but can't have too little. Is the ATM full enough for the weekend? It all has to be facing the right way and you have to have exactly the right amount all the time. I once saw a bundle of cash being prepared to be shipped out that was a little over one million dollars in cash. What I remember was how disappointing it was, not impressive at all. Most banks would love to stop having to deal with cash entirely, it is expensive and a huge hassle.

Money is simply a tool. It is easier to exchange for goods and services using a commonly accepted monetary system instead of trying to barter. "How many chickens for a plow?" is a tough way to do business. We often barter with the Amish for rides or other things they can't do for themselves and it can be kind of messy and often involves baked goods and boxes from Amazon.

The other thing about money is that using it is like throwing a pebble into a pond. It causes ripples. When someone pays you and you in turn spend that money, all sorts of things happen. Multiply that by 330 million people and you get an economy. Something as mundane as getting gas does this. When you pump gas and swipe your card, you put profit in the pocket of the owner of the station. You promote the employment of the Pakistani guy working inside. And the vendors who bring beef jerky and pop, the guy who does maintenance on the hot dog roller, the trucker who brings more gas, the people who install gas pumps, the bank that issues your debit card, the employees at the refinery the gas came from, the people who drill and extract the oil. Those people in turn buy homes and cars, shop at Wal-Mart, and countless other activities. In a tiny way your $50 in gas ricochets around the economy and that is what makes the whole thing work.

Most people don't understand this. They see money as an isolated transaction, one dollar equals one sausage McMuffin. Money is thought of in terms of how much I get this month from my job and how much I spend on bills. They don't give any thought to what happens when the government tinkers with wages or takes money from some people and gives it to others, or when the government borrows money that doesn't exist to spend on stuff. Few people wonder what would happen if the government magically "forgave" trillions in student loans that represent money borrowed and spent. They don't consider what taking away price pressure on health care would do to prices in a "Medicare for all" scheme. Forget asking them about what importing millions of people who are willing to work for cheap and live in conditions Americans won't will do to our economy and standard of living.

Our monetary system is a very fragile thing. It works because we all agree to it. Our currency even states "this note is legal tender for all debts, public and private" but that is true only so long as we agree that it does and the only reason we agree that it does is because it always has thanks to the relative stability of our government. If our government ever suffered from a significant crisis of confidence, and I think that is both likely and imminent, it is not unlikely that cash currency will suddenly not be the universal medium of exchange. At the same time I am leery of precious metals as a hedge against a currency issue. In a SHTF/TEOTWAWKI situation, what use is gold going to have? I am a big believer in having set aside stuff you can barter for other stuff. More on that idea in a later post.

When thinking about money, it is worth recalling the words penned by Rudyard Kipling many years ago in his poem Cold Iron. The full context is a little different but the opening lines are pretty sound: 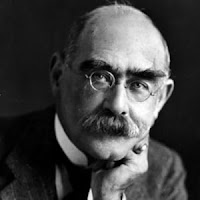 Gold is for the mistress -- silver for the maid --
Copper for the craftsman cunning at his trade."
"Good!" said the Baron, sitting in his hall,
"But Iron -- Cold Iron -- is master of them all."


A lesson the globohomo banksters and corporate oligarchs should remember. All of that money that they think they possess and gives them power, represented by nothing more than numbers on a computer screen, aren't going to matter much when cold iron instead of cash is king.
Posted by Arthur Sido at 10:43 AM