From Acceptance To Worship

It wasn't that long ago that various sexually degenerate minority groups claimed that they just wanted to be left alone and accepted. My, how that changed in the blink of an eye.... 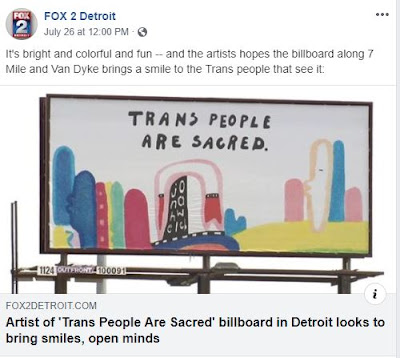 7 Mile and Van Dyke is an intersection in Detroit that is surrounded by liquor stores, industrial sites, dollar stores, hair and nail salons catering to black women and fast food joints. Looking at the Google maps street level view shows overgrown lots, burned buildings, trash and litter. The streets are crumbling and one shot on the street view, right at a gas station at 7 Mile and Van Dyke, shows a police stop.

Clearly the most pressing issue for people who live around 7 Mile and Van Dyke in Detroit is the sacredness of "trans people", not dodging gunfire.

The practice of forcing people to believe and affirm as noble what they know is a lie and revolting is a significant part of the mental warfare conducted by the globohomo Left. It is mind control carried out by the mentally ill. While it certainly has political benefits, it seems the biggest benefit to the Left is that it brings them perverse pleasure to make normal people affirm what should rightly be considered degeneracy. My opinion on this has always been, and is stronger each passing day, that people who engage in homosexual behavior, cross-dressing, gender confusion and the like instinctively find their own behavior revolting. They try to make normal people affirm their behavior as a means of abating their own self-loathing, but the abatement is only temporary and the need for another fix is like a drug in that they need more and more each time to replicate the temporary high. You can never let yourself forget that you are dealing with people deeply trapped in a mental illness, a delusional world of self-degradation.
Posted by Arthur Sido at 11:54 AM