Exiled From The Cities We Built

As a kid, I grew up in a small suburb of Toledo called Waterville. Back then it seemed pretty remote from the main city, a little town along the Maumee River surrounded by farm fields. It wasn't unusual for a football to get lost on Friday night if the field goal kicker managed to put it in the corn field behind the stadium. It was the kind of idyllic little Mayberry that dotted the American landscape, a place where kids rode bikes all over town and no one worried about it. I am sure there was a dark underside in many places but you didn't see it. There also wasn't much to do in the town itself. That meant going into Toledo for excitement and entertainment. For a lot of us, the hub was a mall called Southwyck Mall. Southwyck had three big departments stores and lots of cool places, including a movie theater and a record store. Even better for me, it had two bookstores and my mom had a strict policy of no limit on spending when it came to books. I would put up with a lot of clothes shopping as a kid because at some point I was going to get to go on a rampage in the bookstore.

It also had a bus stop and that became a problem. It was a given when I was a teen that Friday night at Southwyck was "white night" and Saturday night was "black night", something confirmed by the city of Toledo itself. So we just didn't go to Southwyck on Saturday night. I don't recall any actual incidents of racially motivated violence but we just stayed away. That perception of crime and violence helped drive customers away from Southwyck and eventually the mall closed in 2008, although it was essentially dead long before that. Being a place you stayed away from on Saturday night didn't kill the mall by itself but when there were other, safer places to shop it certainly didn't help. Crowds of young people are fine as long as they are not menacing the adult shoppers who were actually spending money.

Fast forward from the late 80's to today and the pattern of Southwyck Mall is being repeated all over the place. It is not just the ubiquity of Amazon, not least because Amazon was in part a response to what was going on. While the media tries to ignore it or hides what is happening behind various euphemisms ("teens", "youths", "young people", "juveniles"), it is getting harder to ignore what is actually going on. It is easy to pick from hundreds of examples but here are just a few:

Wisconsin police are searching for 10 young men who they say were part of a 'flash mob' group accused of stealing $30,000 in merchandise this week from a North Face outlet, all in under 30 seconds — and captured on surveillance footage.

The camera footage shows a group of men entering the store around 7:45 p.m. Monday and then abruptly scurrying through several racks of outerwear and clothing, in footage released by the Pleasant Prairie Police Department. 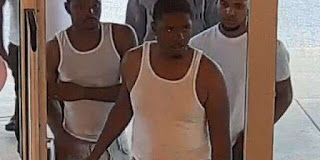 Officers deployed downtown from across the city as the crowd of youths swelled to more than 400, police say. A tense scene unfolded: some teens fighting — a reporter saw one boy punch another on Calvert Street — and others trying to smash storefront windows. Eventually, officers disbanded the crowds peacefully.

But it wasn't their fault, what else are they supposed to do?

On the Inner Harbor promenade, Duke Robinson was working at the Philly Pretzel Factory when the children ran toward him. Robinson hurried to protect his young daughter in her stroller. He worried someone would jump the counter and land on the girl.

The 21-year-old grew up in East Baltimore around Harford Road and knows what it’s like to have nowhere to go on Saturday night — not even a basketball court to shoot hoops. Robinson said city leaders have left the youth with nothing. He finds no fault with the teens.

When "the children" ran up to him. Watch this video, see all of the "children"?

The noise is pretty standard. The "children" have nothing better to do, there aren't enough rec centers or after school programs. It is a giant scam. These "children" are drawn to Inner Harbor because they want to engage in mayhem. Having a place to play foosball isn't going to discourage them.

Baltimore's Inner Harbor is supposed to be the nice place in town for families to go, to shop and get something to eat, to spend money that goes back into the community. Instead it is a place where you have to worry about your safety in case some of the "children" get unruly.

At least three people were stabbed and more than a dozen injured in a subsequent stampede after panic broke out at Chicago’s Navy Pier on Thursday following a Fourth of July fireworks show, police said.

The stabbings came after an argument broke out on the pier around 10 p.m., Chicago police Sgt. Rocco Alioto said at a news conference. Police believe someone shouted "Gun!" in the crowd, causing people to panic, the Chicago Sun-Times reported.

“Just chaos. Chaos. That’s all it was,” a 45-year-old woman visiting the pier told the newspaper. “We got separated from each other because everyone went in different directions when it started. But thank God, He got us all back together. That’s all that matters.”

Chicago's Navy Pier is another of those downtown attractions cities build to draw consumers to the city to spend money.

Here is a bonus video just for fun:


The pattern here is clear. We build places to draw in consumers to come spend money and enjoy themselves, whether malls or waterfront attractions or amusement parks. This is seen as necessary because urban decay and violence already drove the decent people out to the suburbs so every city planner in America is concerned with finding ways to draw them back. Then these gathering places end up drawing out of control "children" who are bent on mayhem and violence for amusement. The same city planners that design these attractions also insist on making them as accessible as possible via mass transit, which makes it easier for "unaccompanied youths" to use social media and public transportation to gather and go wild.

The net result is the same. It will serve to drive out the middle-class consumers who will find other things to do rather than risk being assaulted by roving bands of "children" and it will increase the already rapid pace of shoppers abandoning the malls and "brick and mortar" stores in favor of shopping online. Women control a lot of the consumer dollars in America and women simply are not going to shop somewhere they might get attacked in broad daylight. Fathers with children are not going to take them places where they might get hurt, shot, trampled or tossed off of a balcony.

It is worth noting again that the reason this keeps happening over and over is not a lack of "opportunities" for kids. That is just a scam that "community activists" use to leech public money to create "foundations" that provide "opportunities". The reason this keeps happening is that many young people have a proclivity for violence and mayhem that is reinforced by the media they consume that glorifies their desire to cause havoc and to hurt people for their own amusement. People who take pleasure in attacking other people are not going to find checkers tournaments at the community center to be an attractive alternative to looting, robbing and assaulting people for kicks.

In a society that is dedicated, perhaps suicidally so, to being completely open, large gatherings of people are going to always be a magnet for the kind of people that thrive on mayhem. No amount of alternative programs or police presence is going to stop it in a nation that lacks the will to do what is needed and say what is obvious about this decades long trend that is slowly choking off public access to public spaces.

As Ol' Remus at the Woodpile Report likes to say, stay away from crowds.

That is solid advice and I can't argue with it but I also can't help but be resentful. We built these cities just as we built this nation. We carved out of a violent and untamed wilderness a new nation and along coasts and river and at crossroads we built great cities. We created a profoundly different form of government and over the decades became the greatest nation on the earth. Between our homelands in Europe and our new nation in North America, we are responsible for virtually every aspect of modern life: medical advancements, engineering, electronics, communication, art, literature, agriculture. Modern life wouldn't exist without us and cities like Baltimore and Philadelphia and Chicago wouldn't exist without us. Now those same cities are becoming places we can only visit at certain times and only in some neighborhoods, and even then it is the case that we risk being attacked by a much larger group of thugs while simply minding our own business.

The only bright side is that we are coming to a place where law enforcement will have their hands so full trying to protect the assets of globohomo corporations in big cities that they won't have time for us. The cities are going to burn and nothing is going to stop that. My opinion for the longest time is that there are no problems in large cities that can't be solved by dumping truckloads of guns and malt liquor at strategic street corners on a Friday night, giving the police the weekend off and then sweeping up the mess on Monday.
Posted by Arthur Sido at 7:32 PM