In 1999 I lived in New Hampshire working for one of the largest financial services firms in the world. Because New Hampshire holds the first primary in every Presidential election (Iowa holds a caucus, not a primary), all of the candidates would show up in New Hampshire. The people of the Granite State, along with being very unfriendly to new arrivals, also demand retail politics from aspiring Presidential contenders. So we would have national politicians come to our campus which was home to thousands of employees. That year one of the candidates to visit our location was former Vice-President Dan Quayle. Quayle was merciless mocked for being dumb by the media and entertainment world, which I assumed was just liberals being liberals. Then I met the former Vice-President while he was stumping in New Hampshire ahead of the 2000 primaries. He was dumb as a bag of hammers. He was friendly in a stiff, insincere sort of way but his expression was vacant. Where I worked was a call center and as the head of our outfit introduced me, Quayle asked what we did there. The room we were in was the size of a football field with hundreds of people answering incoming calls. I wasn't sure what to say. Later he gave a little speech and it was brutal. After that day I stopped defending Quayle.

It was a safe assumption that Quayle, especially after his famous potato(e) incident, would go down as the Most Likely To Step On A Rake politician ever. Then along came Eric Swalwell and the rakes have been having a heyday.

Swallowswell is one of the many Democrats running for President by popular demand from absolutely no one. His entire shtick is gun control. You may recall Eric is the guy who famously asserted that any civil war in America would be short lived because the government has the nukes. Apparently if you refuse to turn over your "assault weapon" or engage in any organized civil disobedience, a President Swalwell would nuke your family, just to show you who is boss. He has also mastered having the most painfully dumb look on his face at all times. 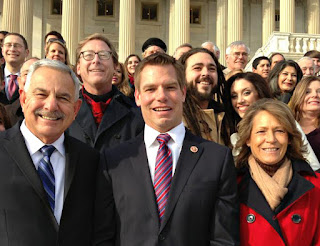 Yep, that is the one.

Wow. He clearly has spent many years practicing in the mirror, trying to cultivate a professional politician fake "smile" but he looks like he really needs to use the toilet. A partially open mouth grimace =/= a smile.

He was born 9 years after me so I assume he knows how social media works but he is constantly posting dumb stuff and get ratio'd into the ground. It always involves guns and it always ends in him getting torched. Undaunted by getting owned over and over again, Eric posted what I assume he thought was a funny poll. It ended badly for him 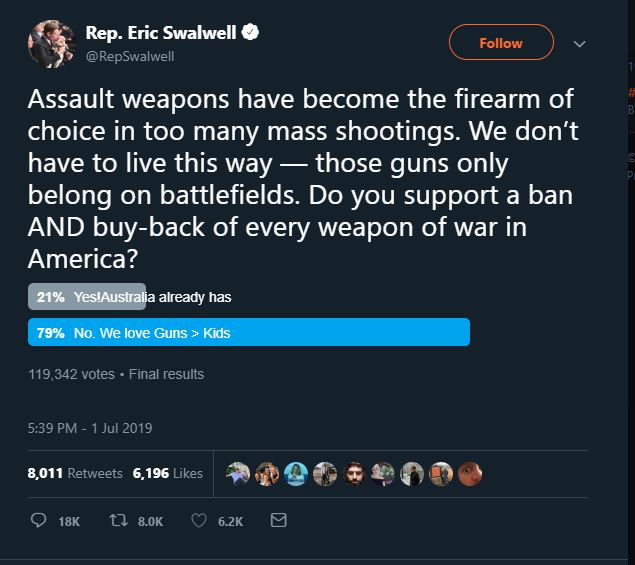 I love his term "buy-back". How does the government "buy back" something it never owned in the first place? Other than nukes, what does Eric propose to do when the owners of "every weapon of war in America" refuse to comply? In a nice twist, the AR-15 and variations thereof has never to my knowledge every been used in significant war, on any battlefield anywhere in the world. However the M1 Garand has been, in both World War II and Korea.

Is Eric going to ban and confiscate/buy-back the 8 round capacity, semi-automatic Garand? It is absolutely a "weapon of war"? What about the bolt-action, 5 round M1903 Springfield? That was the standard issue rifle for Americans in World War I and a lot were still in use in World War I.

What about muzzeloaders? More of those were used in war and have killed way more people than all of the AR-15s ever made. Those are clearly weapons of war.

At some point all of those were weapons of war, unlike the semi-automatic AR-15.

Swalwell is a literal imbecile and based on his poll numbers, even the oafish Democrat primary voters understand this but he is far from alone in his doltishness. There is a pretty decent chance that some other, less obviously dangerous, Democrat will win the White House in 2020 and near the top of their agenda, right after throwing the borders open for the detritus of the world, will be to disarm the American people.

I wish we had a hard-nosed incumbent President who would fight against these people on our behalf.
Posted by Arthur Sido at 8:08 AM