If there is a defining characteristic of American culture in 2019, it is that we live in a society of lies. They are lies everyone knows are lies but we still act like they are true. We are supposed to believe that homosexuality, a deviant practice everyone has known is unnatural and perverse forever, is just as normal as heterosexuality. Even though everyone knows that apart from a few biological abnormalities, every human being is born male or female and that sex and gender are the same thing, we are fed the lie that gender is fluid, malleable and subject to being redefined at a whim. Thanks to the women's soccer world cup, the specter of the "gender wage gap" has resurfaced, even though it has been debunked many, many times but if you ask people on the street they will swear up and down that women are paid less than men for the same work. For the past two and a half years we have been endlessly screeched at about the "Russian collusion" that has never been proven, and talk of impeachment has faded away and only repeated by the insane or the dumb. We believe that 110 pound women can beat up 250 pound men because that is what we see on TV and in the theaters. We are to believe that known pervert Bill Clinton flew two and a half dozen times on Epstein's "Lolita Express" but nothing naughty ever happened. Bill is known for his restraint and self-control after all.

Much of what we are required to believe and affirm is a lie and much of what we know to be true is considered a thought-crime if uttered. When a small cabal of people with homogeneous political beliefs and cultural background are the sole arbiters of what is "true", then the very concept of Truth is meaningless. "Truth" is what they say it is and only what they say it is. So it isn't really surprising that people today are incredibly cynical about everything. Institutions that once were trusted without question, from religion to government to civic groups, all are held in suspicion or contempt.

Perhaps no lie is more widespread today than the idea that "diversity is our greatest strength", where "diversity" = fewer white people, along with the related belief that America is a "nation of immigrants", where 19th century immigrants from Europe are indistinguishable from mestizo and African immigrants in the 21st century. In 2019 a poem on Ellis Island holds more authority than the Constitution or the laws passed by the government.

A normal person understands deep down that this is bullcrap. More diversity leads to conflict. Younger people don't remember this, even I barely do as a Gen Xer, but there used to be a lot of bad blood between different ethnic groups in America, Polish and Italian and Irish, and of course between Protestants and Catholics back when they knew enough rudimentary theology to understand the difference. That conflict was between different groups of Europeans with a common religious heritage. When you start to mix in people from completely different racial and cultural backgrounds, the conflict is inevitably worse. The old dissident right formula is completely true: D+P=C  (diversity plus proximity equals conflict).

That doesn't stop people from asserting the opposite as if it is an indisputable fact. Look at this tweet and my response. 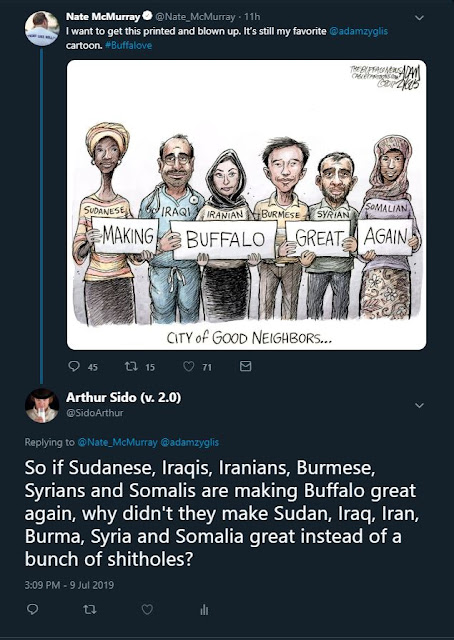 It makes no rational sense to assume that people who have proven over the course of thousands of years to be incapable of forming stable societies are suddenly going to be able to not only sustain but improve existing stable societies that they didn't build. The answer is always the same, "muh colonialism!", but you could leave the Somalians alone for 100 years and if they didn't all starve to death or kill each other, in 100 years Somalia would still be a shithole. Haiti overthrew the French in 1803 and more than 200 years of Haitian history is an unbroken string of corruption and incompetence. Their half of Hispaniola is largely deforested, has no functioning government or economic system and the people mostly dwell in subsistence level squalor. The only time Haiti is relatively stable is when a Western nation is occupying the country.

The reason places like Somalia, Sudan and Haiti are shitholes is that they are full of Somalis, Sudanese and Haitians. Simply moving them from the Bad Dirt nations to the Magic Dirt nations doesn't change their nature. If you could somehow transplant all of the people in Africa to Europe and all of the actual European people from Europe to Africa, in 50 years Africa would be the most prosperous continent in the world and Europe would be a desolate wasteland. In spite of the less-than-subtle addition of the stethoscope on the Iraqi in the cartoon above, we aren't getting doctors and engineers and scientists. We are getting low IQ, low skill laborers, service industry employees and cheap code monkeys.

The European immigrants from the 19th century and early 20th century are not the same as the mestizo and African migrants of the 21st century, and America is not the same nation. In 1900 there were 76 million people in America. Today we are well over 300 million people and tens of millions of those are here illegally, don't speak English very well if at all and are not only not assimilated but have no interest in assimilation. They don't want to be Americans, they just want to live in America, and there is an enormous difference. America in 2019 is a nation on the brink of fiscal calamity and even outright civil war and adding in millions of immigrants is only accelerating the collapse.

The Zman wrote about this same topic this morning: A Darker Shade Of Pale and I thought this was especially good:

This vision of the future is no doubt a driving force behind the race radicalism of people like Ocasio-Cortez, Rashida Tlaib and Ilhan Omar. It assumes things about people that are not true. The old gag about Magic Dirt Theory is a joke among dissidents, but people like Rashida Tlaib think it is real. She thinks if her people move here, displacing the heritage stock, nothing changes but the complexion. Her people will suddenly stop acting like her people and take on the habits of our people, but with more color.

This is nonsense, of course, because much of what we think of as American society exists because heritage Americans support it. The people who created this society would have done so wherever they landed. We know this because it has happened in places like Australia and even Africa. Despite it all, countries like Rhodesia and South Africa were able to create first world societies. In the game of dirt, no place has more tragic dirt than the Dark Continent. Yet Rhodesia existed. South Africa existed.

People talk about colonialism and apartheid without any understanding of the topic but as white control over Rhodesia and now South Africa recede, those nations that were once the best Africa had to offer are rapidly sliding back toward the prototype of African nations: economically mismanaged, corrupt government, violence.

Our overlords are replacing us, thinking they will have an easier time ruling over a new, browner class of "Americans". Having failed to convince white Americans to get on board with their neo-Bolshevik program, they are simply importing a new "American" electorate while simultaneously suppressing heritage American reproduction financially, medically and culturally. What they are going to find out is that ruling people who have proven incapable of being governed for centuries is going to be impossible. Having a captive non-white voting bloc that is 20% of the population is one thing but when the imported new "Americans" are 60% of the population, concentrated in urban areas and have come to expect a certain level of gibs, keeping them happy on a diminishing stream of tax revenue from heritage Americans isn't going to work.

When expectations run headlong into reality, the fireworks will start. Be smart and don't be in the blast radius because you won't have time to bug-out when it blows up.
Posted by Arthur Sido at 10:21 AM