A Tale Of Two Sentences

Here is a fun little experiment. 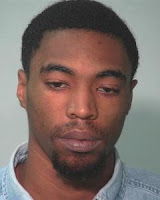 A local Fort Wayne man by the name of Marcus Dansby was sentenced yesterday. Mr. Dansby received a sentence of 300 years in prison for murdering four people and attempting to murder another, a 14 year old girl. One of the people killed was a full-term baby that was Dansby's own child. The mother of the child, Dajahiona Arrington, and Dansby were in a "relationship" but split up because she was pregnant and thought it was another guy's baby, but it turns out it was Dansby's child. Oops! Side note, it is best to avoid "relationships" with women that are such whores that they don't even know which guy knocked them up. At his sentencing, Dansby reportedly said to the families of those that he murdered: “I don’t care how you guys feel. You guys can feel how you want to feel.”. Clearly a deeply remorseful man. The pregnant mother of his child, Dajahiona Arrington, was 18 at the time of the murder. Since she is described as being "full term" with his unborn child named A.J., it is quite likely she was underage when he impregnated her.

Then there is James Fields. Mr. Fields was in attendance at the infamous Charlottesville rally almost 2 years ago in August 2017. There is no event in recent American history that is more distorted and lied about than Charlottesville and Mr. Fields is the central villain of the story. Mr. Fields drove his car into a group of people at the end of the chaotic day where police essentially stood aside and allowed far left "protesters" to attack the lawfully assembled "Unite The Right" rally attendees. Whatever you think about Unite The Right, they had every legal right to assemble and the police had an obligation to maintain order. They did not. Anyway, Mr. Fields drove his car into a group of people. One of the people involved, Heather Heyer, died on the scene from an apparent heart attack. Because Mr. Fields had a Hitler fetish and was on the "wrong" side of Charlottesville, he was given a life sentence for  29 Federal "hate crimes". But that wasn't enough. The state of Virginia also went after him and he again pleaded guilty and was sentenced to another term of life in prison plus 419 years.

There is a significant amount of evidence that would suggest that a competent lawyer could have possibly gotten the charges against Fields reduced or eliminated but calling his "defense" lackluster is a serious understatement. There is no credible evidence that Fields went to Virginia with the intent to kill anyone, unlike Dansby who showed up with a gun and a knife to murder four people.

Sure, both men are in their early 20s and will spend the rest of their lives in prison, but the sentencing disparity is pretty stark. Dansby murders four people in cold blood and tried to murder a 5th person. Fields drove his car into a crowd for whatever reason and one person died as a result. Fields gets a much stiffer sentence at both the federal and state levels.

The reason for the disparity is obvious. Marcus Dansby is just another black criminal who killed a house full of black people. That isn't very interesting and it is also all too common as 75% of mass shootings are committed by blacks, usually with other blacks as the victims. No one is going to care in a month other than the families impacted. All of the press conferences and yammering about the scourge of gun violence don't ever amount to anything because the black community needs to get to a place where someone mad about something doesn't decide to gun down five people.

Fields is a political prisoner. In any other circumstance he would have been given a lighter sentence of vehicular manslaughter or something but it was decreed that he was going to be made an example of. I am not saying he shouldn't spend time in jail, although I wonder what would have happened if he had competent legal counsel, but multiple sentences of life in prison plus 419 years? That is so wildly disproportionate and obviously only serves one purpose: as a chilling effect to anyone on the Right from exercising their First Amendment right to free assembly. A number of "counter-protesters" engaged in violence and got off without jail time but anyone defending themselves had the book thrown at them.

James Fields will spend the rest of his natural life in prison to be an example, a warning to others to keep their thoughts to themselves. Marcus Dansby will also spend the rest of his life in prison because we have nothing else to do with him. One man was basically in a car accident that resulted in a death, one man went to a home with a gun and an intent to kill but in the eyes of the "law", James Field committed a much worse crime because he was motivated by "hate".

Don't make the mistake of thinking the law is applied equally. When Trump leaves office and is replaced by a Democrat, the full force of the Federal government is going to be turned loose on anyone who dares speak up for white people. Plan now for being not just a hated dissident but also quite possibly a criminal.
Posted by Arthur Sido at 9:38 AM