The Democrat Dumpster Fire/Debates, Night One: Lieawatha and the Nine Dwarfs.

I managed to watch an hour of the Democrat debate last night and it was absolutely painful. I tried to keep myself amused by live-tweeting but even that wasn't reducing the pain. When the first hour was over and they announced Chuck Todd and Rachel Maddow would be moderating the second hour, I had to call it a night. Listening to and even looking at Maddow turns my stomach. I hope she isn't moderating tonight, as there could be some fireworks as everyone lines up to take their shot at Biden and Bernie and of course Buttpirate.

For the first maybe 40 minutes it was the Elizabeth Warren show. She got the first question and then seemed to get a question every few minutes. At one point Cory Booker looked visibly irritated when she got yet another question while he had been sidelined for a while. Then again, he always looks a little crazy so it is hard to tell. Tulsi Gabbard's sister was apparently in charge of her Twitter account during the debate and posted this: 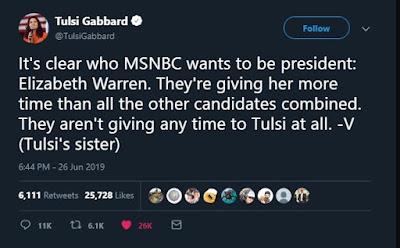 Warren was shrill and stuck to her talking points. At one point the moderator asked who would be in favor of abolishing private health insurance and replacing it wholesale with a public option and Warren's hand shot in the air like Hermione Granger being insufferable at Hogwarts.

A significant percentage of female politicians think they need to be loud to sound serious and they just come across as shrill and screechy. Warren is one of those.

Beto O'Rourke was a cringe as you would expect, the guy is just a child with some gray hair. So awful. I think he is done after last night.

Cory Booker was more polished that Warren and sounded fairly competent but his crazy eyes are a huge liability. He should get a boost.

Bill De Blasio was the bottom of the heap, the guy is just a revolting scumbag. I wanted to punch him in the mouth through the computer screen. He epitomizes the worst stereotypes of New Yorkers, loud and rude and blustery combined with being painfully ignorant.

Nobody cares about Jay Inslee or Tim Ryan or Amy Klobuchar.

Julian Castro came out pretty strong. He is wrong and dangerous, and was spending too much time talking about specific laws by their code which makes people sleepy, but he was a scrapper. He also set the bar for open borders and made everyone else either agree to his super-radical vision or seem like a Nazi. Castro sees the people invading our border as his people in a way I suspect he doesn't see me as his people even though I am an actual American. He doesn't want any border control because he wants as many mestizos in this country as possible, apparently oblivious to the fact that we already tried a country full of El Salvadorans. We call it El Salvador and it is a disaster which is why they are fleeing to a white nation.

Tulsi Gabbard was a huge flop. She seemed flustered and confused and was as irritating about reminding us of her military service as John Kasich was about reminding us his dad was a postal worker. Very disappointed but at least she is mildly pretty.

The whole first hour was a rapid descent into lunacy. "Reproductive justice" means ensuring abortion rights for trannies without a uterus. Banning private health insurance. Making it no longer illegal to be in this country illegally. Moderators asking questions and respondents answering in Spanish. I hope a lot of regular people were watching and realizing that the Democrat's vision for America is people who are running for President engaging in debate while speaking Spanish and talking about abortion rights for trannies.

Tonight should be more interesting. Biden is going to be the piñata  for the evening and I expect it to get ugly. I hope it does, that might distract from having that ugly little boy Rachel Maddow as a moderator.
Posted by Arthur Sido at 12:54 PM