Send In The (Debating) Clowns

Tonight is day one of the first Democratic debates and the stage tonight will feature the JV team. Many of the people on stage are polling at barely above zero and there are a couple I don't even recognize at all. On stage this evening will be Elizabeth Warren, clearly the top dog among the ten. Also tonight we have Cory Booker, the debate organizers split the homosexual candidates so Pete Buttigieg and Booker wouldn't be on stage giving each other smoldering glances. Tulsi Gabbard will be there, and expect her to get tough questions about why she isn't sufficiently supportive of Our Greatest Ally™. Beto will be flailing around like a toddler drinking Red Bull from a sippy-cup. The rest of the field combined couldn't draw enough people to fill a gas station restroom.

I thought about proposing a drinking game where you would take a drink everytime someone mentioned Trump but I was afraid I would be charged with attempted murder after people ended up in the ER with alcohol poisoning in the first five minutes of the debate. Instead I made a handy Democratic debate bingo card: 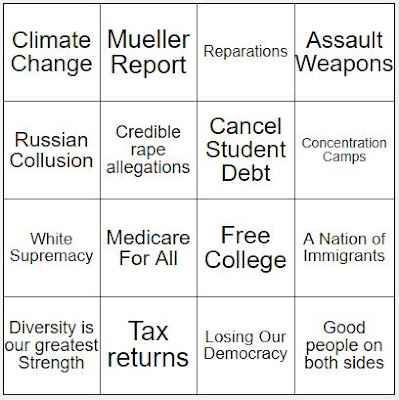 Tomorrow night is the main event with Bernie and Biden on stage along with Peter Buttplug, Kneepads Harris and Andrew Yang. Will Biden wander off the stage or start drooling? Will Bernie attempt to comb his hair? Who will promise me the most free stuff? I can't wait!

Can you imagine being Joe Biden's handlers tonight, praying to whatever demonic idol Democrats pray to that Joe doesn't go off the rails or start groping Kirsten Gillibrand on camera tomorrow night? No one is in more peril than Joe, already gaffe-prone and definitely suffering early stage dementia, as the front-runner he is going to be attacked from all sides. When you consider how incredibly dumb he is, I can't see this going well for him. It would be sad to watch if it were anybody but Joe Biden.

I normally couldn't stand to watch that many liberals lying in tandem but this promises to be such a clown show that I might watch both nights for the sheer cringe factor. Things are about to get weird.
Posted by Arthur Sido at 7:53 AM