As the culturally reinforced blinders came off, one of the things that has become apparent to me is that we are not led by the best and brightest among us. The opposite is generally true. The higher the public office, the smaller the people that pursue it. I wrote about this last fall, A Parade Of Small Men In The Highest Office. In my 40 some odd years of being politically aware, we have had a string of small men occupying and running to occupy the Oval Office. I wrote in closing:

It seems odd, does it not, that the most powerful office in the world seems to mostly attract such mediocre leaders? I think many decent men and leaders just simply are not willing to do what it takes to become President. The endless holding out of your hand for money, sucking up to people you probably don't like, the endless scrutiny and criticism. Why would someone put themselves through all of that for any motivation other than narcissism?

Perhaps if the Presidency wasn't quite so significant, wasn't such an endless fishbowl of attention, better men would choose to run. As our government has grown more and more ubiquitous and powerful, so too has the importance placed on the President. In a more sane world, who the President is wouldn't matter so much to the average person on a daily, or now minute by minute, basis and we could see some real leaders and statesmen run for the office. Until that happens we can expect to see an endless succession of narcissistic political chameleons.

The last two nights have only reinforced that statement.

We live in the most powerful and generally most admired nation in the world. Sure, many Europeans sneer at America but their condescension is generally covering for jealousy. Do Americans care what some pissant in Denmark thinks? Nope. For more than 150 years, America is where people from around the world have wanted to come. We have produced great military leaders and statesmen, men who created a government and a society that is the envy of the world. Much of what we take for granted in modern technology, medicine, conveniences and entertainment were created right here in this relatively new nation. That is our past. The Democrat debates show our present and a glimpse of our future. Thanks to a winner-takes-all system, we have a political duopoly and that system has never been more of a dumpster fire than it is right now.

On the Republican side, the party is the party of Trump. There are some clowns who think they are going to "save" the GOP from itself, which is really just a return to being gracious losers who wear nice suits while getting kicked around by liberals. From John Kasich to Jeff Flake to newly self-appointed libertarian savior Justin Amash, they all assume that what matters is not winning but rather their rigid adherence to a set of principles dictated to them by the Left, a set of principles the Left cheerfully ignores at every turn.

Trump himself is an enormous disappointment. We knew he was a scoundrel and a loose cannon, and above all else a flaming narcissist but he has been outmaneuvered at every turn by Pelosi and Schumer on the one side and is played for a chump by his advisers on the other. He ran as an America First nationalist who would finally secure the border but he has governed like a typical Conservative Inc. Republican. Sucking up to Israel, threatening new wars, giving tax cuts to globalist mega-companies that wave the rainbow flag and work against him at every turn. 2016 Trump would tear apart 2019 Trump for being weak and a punk. As an amusing cultural sideshow, Trump was great but as President he is turning out to be a huge disappointment. Whether that is him being played by the Swamp or is intentional is uncertain but the result is the same. What is worse is that there is no bench behind him. Who is the upcoming populist/nationalist leader to take over when Trump leaves office? Pence? Pence is a nice guy but he is a generic Republican empty suit. There really are no significant leaders to take up the mantle after Trump. On the bright side, when Trump leaves office, either in 2021 or 2025, he will go down in history as the last Republican President so it doesn't really matter.

If Trump has any hope of winning re-election, it was on display the last two nights. The Democrats put forth their top 20 candidates who hope to unseat Trump and to even the most politically ignorant observer it was a dumpster fire that made the case for re-electing Trump better than he ever could. 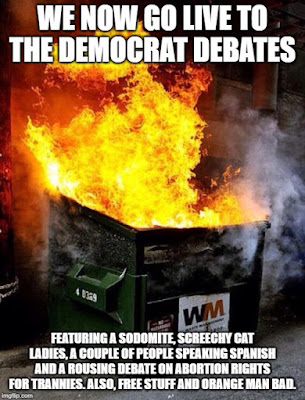 I am not going to go into the details because it was so awful and others are doing a better job of it. What I want to point out is that these people are not the best and brightest America has to offer. They are a collection of grifters, liars and idiots. The handful of reasonably intelligent people on stage, like Andrew Yang, Tulsi Gabbard and John Delaney, have zero chance of being the nominee. The front-runners are a couple of decrepit old white people (Biden, Warren), an elderly Communist Jew (Sanders) and a couple of token blacks, one a closeted homo (Cory Booker) and one a skank who slept her way into politics (Kamala Harris). Peter Buttpirate has the homo vote and donors but I don't think he has the staying power.

What is really staggering is that none of these people has ever had a real job. Biden is a lifelong politician. Same with Cory Booker. Warren taught in law school for many years when she wasn't running down buffalo on the plains with her Cherokee family. Bernie Sanders has been a leach and a grifter his whole life. Peter Buttplug has been in politics his entire adult life as well, with a brief stint in the Naval Reserves (insert joke about Seamen here). Most the rest of the field seems to have the same basic resume, college then law school, then a few years at a law firm and then into politics. Tulsi Gabbard served in the military but otherwise has been a politician. Robert "Beto" O'Rourke is basically a bum who has been arrested a few times and entered politics as a way to avoid getting a job. Yang did some internet start-up work but he isn't really a serious candidate.

What is also disturbing is that the entire field is made up of lunatics and the handful of non-crazed people are drowned out by the nutjobs. I wouldn't trust 3/4 of these people to collect garbage but one of them might become President. You wouldn't hire Joe Biden or Kamala Harris to run a small company but hey let's give them the nuclear codes.

A side observation is that this field of candidates shows the lie of elite academics. There are lots of elite university graduates on stage. Booty-gig went to Harvard. Booker went to Stanford and Oxford. Loathsome Bill de Blasio has a Masters from Columbia. Amy Klobuchar went to Yale. Kirsten Gillibrand attended Dartmouth. Andrew Yang went to Brown and Columbia. Yang is pretty smart but most of them are awfully dumb. Our elite schools don't have the best students, as the acceptance of little turd David Hogg to Harvard simply for being anti-gun proves. They are just the places where the connected and powerful attend and a degree from these schools opens doors to enter the elite strata of society. Going to an elite school is not a sign of being a decent human or competent or even especially smart.

Most of the debate seemed to be a test to see if these people would affirm an increasingly crazy and out of touch series of propositions and they did so pretty faithfully. Getting rid of private health insurance, decriminimalizing invading our country, gun confiscation, giving illegals free health insurance, giving people "free" college or just flat out giving them a cash handout. Not only did none of them dare to give a contrary answer, except Gabbard on war, but all of them tripped over themselves to appear the most enthusiastic.

Bottom line, you get the candidates you deserve. This is what America wants, career politicians who have never held a real job who promise the moon, free stuff and a pony. This clown car of idiots is not the cause of our issues, it is a symptom of what we have degenerated into. They also affirm what many of us have been saying: there is no political solution to our woes. Sometimes the only solution is to cleanse it with fire. We have had it good for a long time but the string is about to run out.

Hopefully there will be copies of this debate so the people who survive and rebuild can be reminded to never let our people get to this point again.
Posted by Arthur Sido at 9:11 AM