Get Out Of The Game

I posted a brief thread on twitter last week that seemed to resonate with a lot of people. 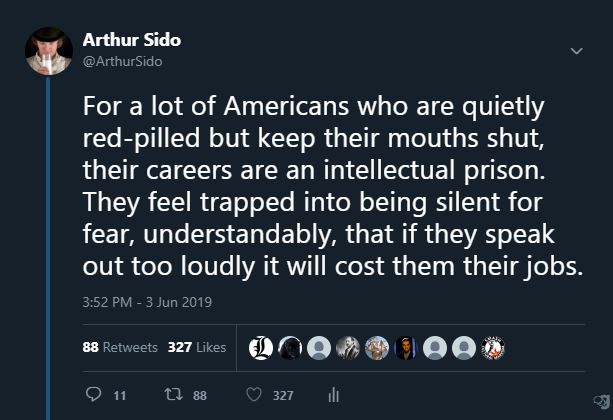 This is a path I have taken, initially somewhat involuntarily. Because of health issues I was forced to leave my corporate job in financial services. Granted I hated my job and it was a soul-crushing dystopia with cubicles instead of burned out buildings where a decent part of each day was making sure you didn't get in trouble because someone else screwed up but it paid really well and the benefits were great. I despised the work itself as most of it was make-work nonsense to comply with government rules dreamed up by some cat lady bureaucrat who needed to make rules to justify her job, coupled with endless meetings about meaningless stuff. The stuff I liked to do, visiting clients in person and doing sales presentations, were too few and far between and when you traveled you were in constant peril of something blowing up while you were away. So it isn't like I didn't want to leave, I just thought I couldn't because I was at a point where my pay was so high that the only other options were similar jobs where I would hate what I did in slightly different ways. Then my health went off the cliff and I couldn't do what I was doing before.

So long story short, I found myself on the outside of the corporate world and eventually we started our own business. It has its own stresses but I am a lot happier than I was before.

Financially our income has changed from a regular every-other-week paycheck to a pretty wildly varying amount of income based on how much we work. It has also changed in volume as our real income is about 50-60% of what it used to be. Five years ago the idea of that would have been unthinkable to me, how could we ever survive on less money? Now I realize that most of our expenditures were the result of how much money we have. Make less, spend less but quality of life isn't worse.

After around 20 years of being in corporate America, financial services and bank branch management, I have a pretty dim view of the entire enterprise. From what I can tell, most of what most people in an average big globalist corporation are doing on a daily basis is completely useless. This is less true but still more often accurate than not even in small companies. The amount of regulation and paperwork is obscene. Compliance departments, all of Human Resources and the relatively new Diversity offices all serve as places to stuff college grads with no real skills.

People hate this life and pop culture reflects it. Even though it is dated, you still can't beat Office Space for the best depiction of corporate life and nothing beats Peter meeting with the Bobs.

100% real life in the cubicle warrens.  Your days revolve around bathroom breaks, getting coffee, lunch, getting a snack from the vending machine and then running out the clock hoping nothing blows up before you leave for the day. Best lines:

I'd say in a given week I probably only do about fifteen minutes of real, actual, work.

That’s my only real motivation is not to be hassled, that and the fear of losing my job. But you know, Bob, that will only make someone work just hard enough not to get fired.

Most people I knew were, deep down, doing just enough actual work to not get yelled at and not get fired. Sure there were some people who loved projects and meetings and meetings about projects, but they were probably cruel to animals at home and likely serial killers.

So why don't people do something else? Fear. Fear of losing those cushy benefits and that regular paycheck and fear of doing a job that doesn't have much social status. For some reason, and this goes back to my own high school days, it is just an article of faith that sitting in a cubicle cooking under artificial lights like a pack of fries under the warming lamp at McDonalds, staring at a computer and doing the same repetitive, meaningless tasks over and over is more prestigious than working with your hands. Sure you don't get dirty but you also don't accomplish anything.

Recently I have started to see a new, more ominous problem with this corporate life. You get so used to that steady paycheck, the health insurance for your family and the contributions to your 401k that you will do anything to prevent a disruption. That includes keeping your head down. Do your job, grumble under your breath at home if you must but otherwise keep your mouth shut.

There are plenty of examples of people getting doxxed and losing their jobs because they were seen at the wrong sort of political rally. Employers today will check your online footprint before hiring you. I know anyone who searches my name at some big globohomo corporation is going to circular file my resume after five seconds of Googling my name, partly for using terms like "globohomo". Being open and using my real name means never going back to the corporate world. This traps people. Who wants to go to some rally or say what you really think online when it means facing antifa thugs who can attack you with impunity and you get arrested if you fight back or if you get called to HR the next day and get fired because your personal life is bad for the corporate image? Your stock options and dental plan are a leash to keep you in line.

Now if things were going swimmingly in the nation, that wouldn't be all that bad. You pretend to work in return for keeping your mouth shut and you get to go on an overpriced vacation once a year, take long lunches and sneak out early on Friday after spending the entire day calculating just how soon you can sneak out early.

But things aren't going swimmingly. Public and private pensions are dangerously underfunded and are going to either go belly-up or need a bailout from the also soon to go belly-up Federal government. The savings of most white collar workers are heavily invested in equities (the stock market). I know this because I used to tell people that if they weren't invested in the market, they would never retire. Right now, of the top ten largest companies in terms of market capitalization (basically stock price x number of shares), only 3 actually make anything (Apple, Johnson & Johnson and Exxon Mobil) and Apple is primarily selling an image and luxury brand as opposed to actual products. The rest are mostly tech companies like Facebook and Amazon. Sure Amazon sells everything under the sun and ships it for free but they aren't making anything apart from their increasingly poorly made Kindle tablets, their in home spy system Alexa and a few clothing items under the Amazon Basics label. No GE, no car companies or steel companies. These are companies that seem to me to be wildly overvalued compared to what they actually do and I am confident that the vast majority of investors have no idea what level of risk they are taking. People pick their mutual funds based on name recognition and looking at charts of past performance. Few people stop and wonder about the stock market indexes tripling in the last ten years. Not to go all Zero Hedge here but I think we are looking at a very overpriced market and a significant economic event could bring the whole thing crashing down (I am not currently a licensed agent and am not making any recommendations)

Meanwhile the Social Security and Medicare system, the ultimate prize at the end of the working life of middle-class, white collar Americans, is about to implode like the Game of Thrones franchise. I've talked about this before so no need to rehash it but it is pretty grim.

We have a system of cascading financial obligations that keep growing and growing that are based on an ever expanding tax base but right now we are leaving skilled jobs unfilled, have millions of prime earning age workers on the sidelines and we are replacing workers making decent wages with low skill service industry workers. It isn't a one to one swap to replace a plumber making $70,000 a year with a part-time Wal-Mart stock clerk making $17,000 annually. The balance is already tipped over to emphasize takers rather than contributors and this is getting worse by the day.

My rather rambling point is that many of us have traded our voices and independence for a promise that will ultimately turn out to be empty. The same people who have been telling us in soothing tones to just consume and passively show up to our cubicles are also actively rigging the system against us. Someone should make a movie about this... 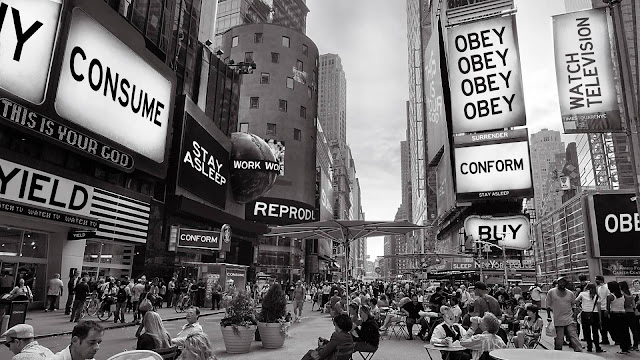 A lot of Americans have been playing by the rules their whole life, only to realize now that the rules were changed by someone else, without their knowledge and in order to screw them over.

The boys at Myth of the 20th Century had a very good podcast the other day, Exit Strategy - Navigating the Decline of the American Empire, and one of them said something I thought was pretty profound. When you realize that things you thought were supposed to be working for you are actually working against you, the impulse might be to give up but he suggested an alternative:

"If the game is rigged, don't play it. Find another game, one that doesn't have a magnet under the table."

Find something to do where you aren't handcuffed by an HSA and dental plan and where having your picture taken expressing one of the foundational rights you are guaranteed as an American free man won't get you fired. That means staying away from meaningless work at a globohomo corporation and it probably means staying away from a lot of highly public jobs (like working at a restaurant). Find something you can do, learn a skill or a trade, discover a market niche and learn to meet that need better than whoever is doing it now.

This is important: Change your expectations. Instead of slaving all year for an overpriced week long vacation where the stress of getting there and back ruins it, do little stuff locally. Having a non-globohomo job usually means being more flexible and homeschooling your kids increases that flexibility exponentially. No one needs an $1100 iPhone so you can scroll through twitter while on the toilet at work, a $50 phone will do the exact same thing. Invest in real property instead of the market, and likewise invest in relationships. I would rather have a handful of neighbors I can count on to help me out in a crisis than ten grand in a mutual fund that only exists online. Move away from super expensive suburbs where you have to make a six figure combined salary just to make the mortgage payment. Get your kids off the public school/college/student loan debt carousel and encourage them to learn a trade.

Get away from the system.

There are millions of things you can do to make a living and a lot of them don't require you to be an indentured servant to some globohomo corporation that hates you and your family.

You don't have to play their game. 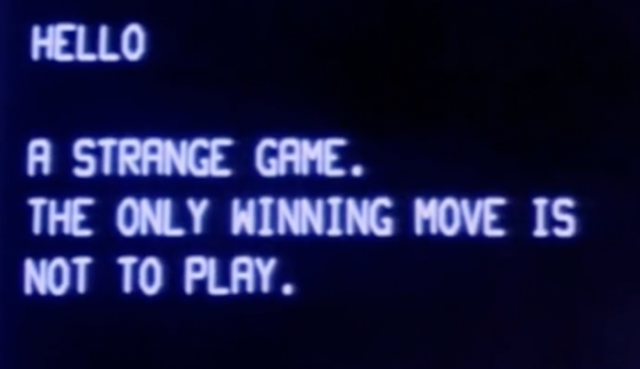