I mentioned that I had been watching the new HBO series Chernobyl (see: Chernobyl: A Warning From The Past, A Warning For The Future ). It is some of the best TV out there, both for the great acting and for the historical faithfulness of the set, the clothing, everything. It was a very close replica of what it would have looked like behind the Iron Curtain in the 80's. There was very little "action" but a lot of great dialogue, scene setting and the whole thing was masterfully produced.

Just as startling, given that this is 2019 and it was produced on HBO, was that the entire miniseries was almost devoid of any political correctness or social justice revisionism. There were no sex scenes, no gratuitous boob shots, although there was a brief scene with lots of naked Russians mining that was pretty gross but not sexual at all. There were no "people of color", since there were essentially no PoC in the Ukraine at that time. The only women of significance were the wife of a fireman that died and a composite fictional character. Not a homosexual to be seen. One brief shout-out to the Jews that at least had some historical foundation and even a mention of the Holodomor. Otherwise it reminded me of the days when film-making was about the film, not the number of identity groups that got "representation".

Sadly, as I mentioned this is 2019 so people can't even watch a mini-series about a nuclear power plant in the Ukraine under Soviet rule without trying to shoehorn some modern political takes into their reviews. Enter the deranged and wildly overrated Stephen King: 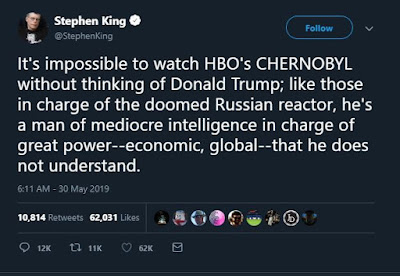 Ah. Trump is just like those Soviet commissars which is why King can rant about Trump in public and not only get no official backlash, he gets praised by tens of thousands. When the events of Chernobyl were going on, Trump was living the exact opposite of the Soviet model. Trump is so talented that he is simultaneously a perfect representation of both sides of the eastern theater in World War II. Amazing! Sadly the producer of the show praised King for his inane commentary, probably because he has to in order to keep working in that industry. This is a reminder of why you should not be paying to support these people: no Netflix, no cable and no HBO, no going to movie theaters.

As if you needed further proof that Trump is living rent-free in the heads of most of the entertainment and media elites in this country 24/7.

A normal person watching Chernobyl doesn't even think of Trump. They recognize the nightmare world of Communism as the culprit. Under Soviet rule, everything was subsumed by the state. Everyone worked where the state told them to work, regardless of qualifications. Everyone lived in housing the state provided, the grim and awful "safe, affordable, adequate housing" that Alexandria Ocasio-Cortez dreams of forcing everyone except the elites to live in. Your only chance to better yourself was to become a higher up flunky in the government apparatus, climbing the ladder by being a suck-up and backstabbing your co-workers. The government only cares about the government and the people are just tools to prop up the government and be slaves for the state. That is the vision of Bernie Sanders and AOC, not Donald Trump.

Our culture is run by people who are mentally ill and really should be involuntarily committed. Stephen King is a prime example. For his own good, it is time for a long vacation in a straitjacket.
Posted by Arthur Sido at 1:58 PM