President Trump kicked off his 2020 re-election campaign last night in Florida. He packed out an arena with 25,000 people, some who waited for 40 hours. When you contrast this to the pitiful turnout most Democrats are getting, it would be easy to get cocky.

Together, we are breaking the most sacred rule in Washington Politics: we are KEEPING our promises to the American People. Because my only special interest is YOU! #Trump2020 pic.twitter.com/bYyK6sOrak
— Donald J. Trump (@realDonaldTrump) June 19, 2019

Trump won Florida in 2016 by 119.770 votes. That is a lot of votes to be sure but compared to the total number of voters in Florida, not really. I would bet a significant number of the 25,000 at his rally last night were among the 4.6 million voters that pulled the lever for Trump in 2016. 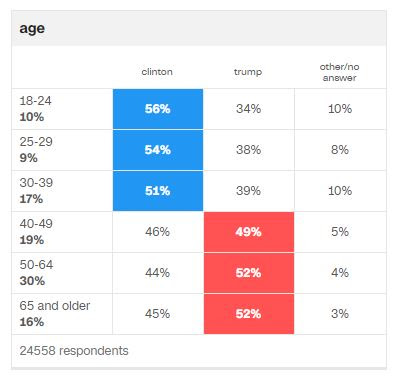 Four years have passed. Around 2.4 million people die in America each year so that is almost 10 million people dying from 2016 to 2020, many from old age. It is reasonable to assume that a significant number of Trump voters will have died in the last four years. Florida has the fifth highest average age in the U.S., which is not a surprise since so many people have retired to Florida.

On the other hand, around 4 million Americans turn 18 every year so there are 12 million newly eligible voters in 2020 that weren't eligible in 2016. As the graph shows, Hillary walloped Trump in the 18-24 age bracket, 56% to 34%. It is reasonable to assume that this pattern will hold true in 2020.

Obviously young people die and old people live on into their 90s as the life expectancy keeps going higher, so it isn't a perfect swap but in general you tend to die when you are older rather than younger. Having made that concession, it is reasonable to assume that Trump voters are dying and Democrat voters are turning 18 in pretty significant numbers.

In 2017 Hurricane Maria hit Puerto Rico and left a trail of devastation behind. To make it worse, the incompetent and corrupt local officials bungled the aid process. The mainland sent plenty of aid and the locals screwed up the distribution, although they somehow had time to get hats and t-shirts printed up. Even though they screwed up, of course the media passed the blame onto Trump. Puerto Ricans tend to be very far to the Left politically and already blame Trump for the hurricane response. So what you might ask?

The so-what is that an unknown number of Puerto Ricans went to Florida after Maria and many have stayed. The real number is unknown but quite likely numbers in the hundreds of thousands. Remember Trump won Florida in 2016 by just over 100,000 votes.

Last November Florida voters overwhelmingly extended the franchise back to felons. That means upward of 1.4 million felons are now able to vote. The Republican legislature is trying to undo this as they know it spells disaster for their party in Florida but the optics of that are going to be terrible since minorities, especially blacks, are wildly overrepresented in the convicted felon population. Who do you think former felons will vote for, the party of getting tough on law and order or the party that excuses criminal behavior? It is about the safest bet in the world to bet that former felons will vote overwhelmingly, if not nearly unanimously, for Democrats. Even if only 10% of convicted felons show up to vote, that is more than Trump's margin in Florida in 2016.

Any one of those factors alone, coupled with the endless media onslaught since the election and the silencing of conservative voices, would be enough to make Trump's 2020 campaign look shaky. Add them all together and you have a tough time seeing Trump win Florida in 2020 and therefore his chances of winning re-election are pretty poor. It also wouldn't take much to flip Michigan, Pennsylvania and Wisconsin back to the Dems and it isn't out of the question for Trump to lose Ohio and even states like Georgia and Texas.

It is very early of course but unless Trump does something to rally his base, he is sunk and so are we. A Democrat, even someone as flaccid and dim as Joe Biden, means even more open borders so illegals will flood the country at an accelerated rate; widespread gun control and attempts at confiscation; more regulations and higher taxes; "free" stuff tacked onto the already careening out of control national debt. It is scary but Trump has done very little to excite his base and get them to turn out for him in record numbers in 2020.

Next year is going to be a great year to stock up on stuff you think might become unavailable if the Democrats win. Starting right now is an even better idea.
Posted by Arthur Sido at 1:18 PM