Do The Math: Texas Edition

Last week I did a piece that looked at the very difficult situation for Trump in Florida in 2020: Do The Math. I don't see a path to re-election for Trump without winning Florida again but now I want to look at Texas. Texas is the reliably Republican big state, not quite but almost off-setting California. Texas is a huge electoral prize and is generally not contested by Democrats, just as California is not contested by Republicans. In 2016 Trump defeated the Wicked Witch quite handily.

When you lump in Johnson and Stein, the "right" candidates pulled in around a million more votes than the "left" candidates. Pretty solid win.

But then look at two years later when popular Senator Ted Cruz had a tough win against an absolute imbecile Robert "Beto" O'Rourke.... 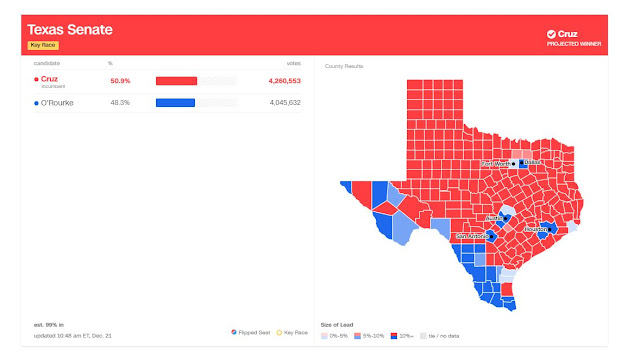 The picture is a little hard to read but there were about the same number of votes cast, a little over 8 million, but Ted Cruz only won by around 200,000 votes. So assuming the same basic people voted in 2016 and 2018, that means 800,000 Trump voters pulled the lever for the spastic O'Rourke just two years later. Or 800,000 new Democrat voters showed up and an equal number of Trump voters stayed home.

In 2020 Trump is going to have to invest a lot more time in Texas than he would have in the past. Trump can still rally the base, in my home state of Indiana what was supposed to be a fairly close race in 2018 between Mike Braun and incumbent Joe Donnelly was a pretty significant blow-out and that is thanks in large part to Trump showing up in Indiana to rally the base multiple times before the election. But Trump needs to be focusing on states like Florida, Michigan, Pennsylvania and even other once reliable states like Georgia.

Like Florida, the electorate in Texas is not static and four years is a long time. A recent report from the Texas Tribune tells an ominous story:

Read that again and then look at this chart from the story:

Yikes. From the article:

The gap between Texas’ Hispanic and white populations continued to narrow last year when the state gained almost nine Hispanic residents for every additional white resident.

With Hispanics expected to become the largest population group in Texas as soon as 2022, new population estimates released Thursday by the U.S. Census Bureau showed the Hispanic population climbed to nearly 11.4 million — an annual gain of 214,736 through July 2018 and an increase of 1.9 million since 2010.

In spite of endless attempts to transform the GOP to appeal to blacks and Hispanics, it isn't working. Blacks overwhelmingly vote Democrat and so do Hispanics, although not quite as uniformly.

Texas is turning into a miniature version of America as a whole as the large urban areas and the border counties are turning deeper blue each year while the rural areas remain deeply red.

The Hispanic community is growing in numbers across the state. But 47% of Texas Hispanics now live in the state’s five biggest counties — Harris, Bexar, Dallas, Tarrant and Travis. Home to Houston, Harris County leads that list with more than 2 million Hispanic residents. But Hispanic growth since 2010 continues to be most significant in Tarrant County.

The urban-rural gap is huge and growing, in Texas and around the nation. The more people we cram into the cities, the more those urbanites depend on the government and the more reliably Democrat voters they become. All part of  the plan; lather, rinse, repeat.

After decades of mestizo migrants, legal and illegal, flooding into Texas and other border states and having children that magically become American citizens, the demographic tide is on the verge of swamping the heritage American population. Worse, there is no sign that these new Americans will ever vote for smaller government, gun rights, pro-life legislation or tax cuts. There is nothing in the Republican party platform that will appeal to black and mestizo voters even though the policies themselves would benefit those groups. I have been making the case for years that tribal and racial identity trumps economic and policy concerns for minorities. In 2008 black Protestant Christians voted essentially unanimously for Obama and did so again in 2012, in spite of Obama's support for gay "marriage" and abortion (As a side note, no one dared bring up the politically monolithic black Christian voting patterns, but woe to the white evangelicals who voted for Trump). Electing a fellow black man was more important than his actual policies, policies that resulted in terrible levels of black unemployment for his tenure. Mestizo voters are similar in terms of in-group racial solidarity.

Because of this, Texas is going to go permanently blue sooner rather than later. Trump probably wins Texas in a struggle in 2020 but that is the end of it. John Cornyn, the other Senator from Texas, is up for re-election next year and will probably win again riding Trump's coattails but when Cruz or whoever the GOP runs is up in 2024, I expect they will lose and the two Texas Senate seats will either go Democrat or be held by milquetoast "Republicans" in the Susan Collins model: essentially Democrats.

Are you starting to see the big picture yet? For decades Republicans have abstained from securing the border for a variety of reasons, mostly because of their abject terror of being called "racist" by people who will call them racist no matter what they do and also because most entrenched Republicans are beholden to the Chamber of Commerce and corporate interests that demand cheap labor and reliable consumers. Trump was elected by promising to secure the border and he has utterly failed to do that. No wall, no immigration enforcement, massive numbers of illegals crossing the border and being scattered in the interior of the country. When he can be bothered to think about the border at all, he mostly threatens and blusters and then forgets what he said or backs down for the umpteenth time. Pointing out his failure to act gets you labeled a liberal on social media by Trump's fanatical followers. In fairness to Trump, the problem was already insurmountable when he took office but he could have at least tried. He should be waking up every day and cracking the whip over ICE and DHS and the Border Patrol to stop illegals and deport the ones we catch. There are well over a million illegals who have final deportation orders or are in the process, and they aren't being sent back. Every year we delay is another year for them to have an anchor baby or to disappear into the illegal alien underground.

Trump likely won't win Florida in 2020 but he will probably win Texas, although it won't matter without Florida, but by 2024 it will be essentially impossible for Republicans to win the White House as Florida, Texas and perhaps states like Georgia flip blue permanently and Republicans become an impotent permanent political minority. There isn't a way to stop this with the "leadership" we have now. There isn't a political solution.

That leaves two options. You can just accept things are what they are and hope you can survive out in the country or you can refuse to live under a Marxist government. There are no other options and the deadline to choose is less than 10 years away.
Posted by Arthur Sido at 11:42 AM