It is a pattern we have seen over and over. A news flash hits the wires and quickly spreads like wildfire around the internet. A shooting in some public place. Multiple casualties. Few details are known but the usual suspects start tweeting about gun control. Hashtags magically start trending like #EndGunViolence and #GunControlNow, almost as if it is a coordinated effort.

Then the waiting game begins.

Depending on the identity of the shooter, one of two things will happen. If it is a white male, his name and photo will show up almost immediately. His social media accounts will be scoured for naughty speech. If it is not a white male, there will be silence for as long as possible. Eventually the name and a photo will come out and just as quickly it will be dropped down the memory hole. It is as certain and predictable as the sun rising in the east.

This happened right on schedule last night with the mass shooting in Virginia Beach by a disgruntled former employee named DeWayne Craddock.

Because the media is very good at this, most people are convinced that "mass shootings" are mostly committed by white men. They have been indoctrinated with the certainty that all white men are ticking timebombs waiting for an opportunity to get their "assault rifle" out of their pick-up truck festooned with NRA stickers, put on their MAGA hats and start shooting some innocent people. So it wasn't long after the news started to break that people starting tweeting stuff like this: 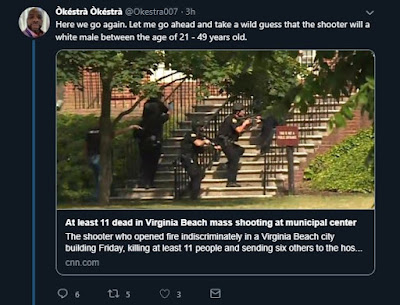 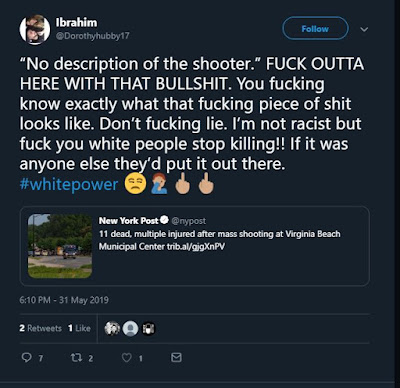 Oppsie! There were others but they seemed to have been deleted as soon as the news broke.

The truth is that the vast majority of mass shooters are black, which is what you would expect to see since blacks are incredibly overrepresented in violent crime, in a per capita and absolute measurement. 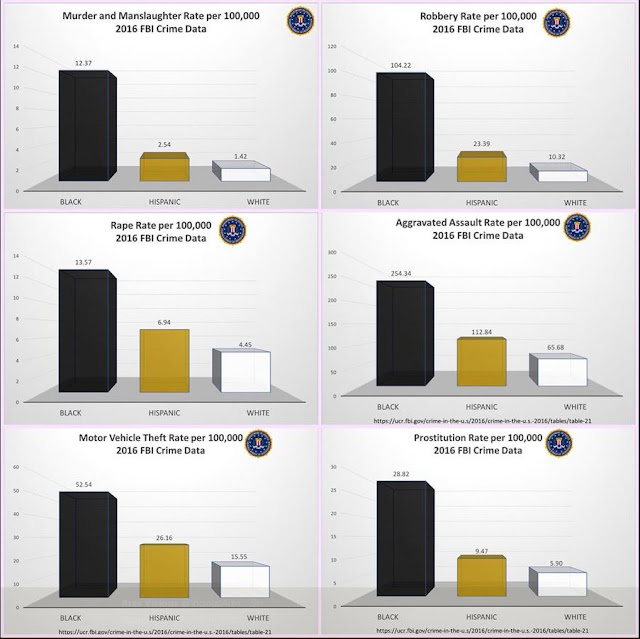 Mass shootings are just another aspect of this. I wrote about this a week ago regarding an incident in Indiana in which a young black man, VaShaun Harnett, shot seven people including another young black man that died, Daymarr Kennedy (see: A Mass Shooting Near A College And Crickets From The Media  for details). When a mass shooter is someone like Dylan Roof or Brenton Tarrant, the media goes into overdrive to get juicy details about his life in order to paint all white men as dangerous creatures that need to be disarmed, deplatformed and censored. So even though many, many highly publicized mass shooters are in fact not white... 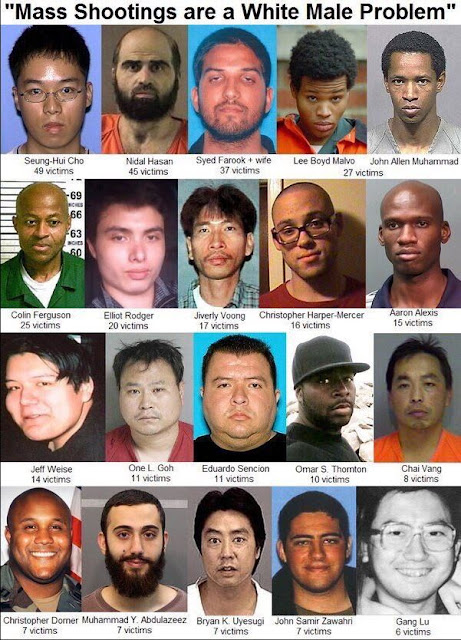 ...the narrative continues. As always, it doesn't matter if the narrative is accurate, it only matters if it is useful. Colin Flaherty had a good article the other day that looked just at recent mass shootings and found that they were all committed by black men, The Lie That Will Not Die and the Truth about Black Mass Shooters:

The lie that will not die: Most mass shooters are white.

Just Google "white mass shooters," and you will find hundreds and hundreds of stories from The Grio, Root, Salon, CNN, PBS, and Newsweek, right up to the Washington Post, with headlines likes this, from Vice: "Why are so many mass shootings committed by young white men?"

But even some of the mainstream media can't keep lying about this. About three years ago the New York Times ran this piece:

A Drumbeat of Multiple Shootings, but America Isn’t Listening

Most shootings with four deaths or injuries are invisible outside their communities. And most of the lives they scar are black.

Notice the subheading. Further down in the story we read this:

Most of the shootings occurred in economically downtrodden neighborhoods. These shootings, by and large, are not a middle-class phenomenon.

The divide is racial as well. Among the cases examined by The Times were 39 domestic violence shootings, and they largely involved white attackers and victims. So did many of the high-profile massacres, including a wild shootout between Texas biker gangs that left nine people dead and 18 wounded.

Over all, though, nearly three-fourths of victims and suspected assailants whose race could be identified were black. Some experts suggest that helps explain why the drumbeat of dead and wounded does not inspire more outrage.

Pay close attention to that line in red and consider the U.S. population as a whole.

Around 75% of mass shootings are committed by blacks who make up only around 13% of the U.S. population.

That is astounding, although not unexpected, but it still gets lost in the media clamor about white men being the main perpetrators in mass shootings. The NYT article is pretty blunt and honest, which is rare, and it is a little surprising it is still available. Of course the spin is that mass shooting coverage is racist and stuff because white mass shootings get more attention but that doesn't really take into account that a) mass shootings of whites by whites is actually rare, b) mass shootings of blacks by blacks is so common as to not be considered newsworthy and, this is the important one, c) the overemphasis on white male mass shootings is intentional and aimed at advancing the leftist narrative.

When white men commit a mass shooting, there is often some planning involved. When black men do it, it seems to be spontaneous or part of gang violence. The NYT makes this point:

They document the mayhem spawned by the most banal of offenses: a push in a bar, a Facebook taunt, the wrong choice of music at a house party. They tally scores of unfortunates in the wrong place at the wrong time: an 11-month-old clinging to his mother’s hip, shot as she prepared to load him into a car; a 77-year-old church deacon, killed by a stray bullet while watching television on his couch.

In the example cited earlier, it appears that VaShaun Harnett and Daymarr Kennedy had some sort of on-going beef. The Facebook page of the deceased young man, Daymarr, was full of arguments between him and other people that often included threats of violence, along with pictures of the minor with guns. In another example in the NYT article, a drunk black man got into an altercation at an Elks lodge, went out to his car and got his gun and came back in shooting. A simple drunken squabble turned deadly. In a sensible conversation we would wonder why it seems that personal issues and minor incidents so often turn deadly in the black community, why the appearance of being disrespected can lead a young man to kill someone else when the consequences for doing that are life in prison or the death penalty. I have been really mad at people before and I have access to firearms but I don't gun people down because first that is wrong and second I don't fancy a life in prison just to win an argument. Being mad or disrespected is not a valid reason to shoot someone, and often shoot a bunch of by-standers because you are a terrible shot. We don't talk about that because it raises other, even more uncomfortable, issues.

The answer is complex but it is simultaneously very simple. The people in the mass media, and especially the people who control the media, are some of the most politically monolithic and ideologically uniform members of our society. The media from top to bottom is essentially homogeneous in holding to an extremist left-wing ideology that has roots in the Marxist worldview. They were slavishly devoted to Obama not just because he was a black Democrat but because he learned at the feet of the same Marxists that they adore. He was one of their own. Trump, at least candidate Trump, is hated because he seemed reactionary, counter-revolutionary, a good old fashioned capitalist pig. We are still fighting the same war of ideologies that we fought last century but we don't seem to realize that the media is on the side of the bad guys in those wars.

Everything the media puts out is carefully washed in ideological language. What they choose to run, and what they don't. How they emphasize certain stories and bury others. The people they hire, the language and photos they use. Everything is intended to indoctrinate rather than inform. So news stories about mass shootings are great when they can advance a narrative, but ignored when they don't or in many cases act in opposition to the narrative. DeWayne Craddock and Virginia Beach are prime examples of stories that are counter-productive and thus disappear. Craddock raises the issues of black men and mass shootings, the seeming inability to think through before acting. So down the memory hole he goes because mass shootings are only useful when they advance "gun control".

Gun control is people control. Take away the guns and you can more easily control the people. Lawfully armed citizens are the single greatest threat to the wannabe dictators. Gun rights groups like the NRA and Gun Owners of America are overwhelmingly white and are the most effective firewall against gun confiscation and bans. In order to advance the narrative of the media, white men and gun rights groups must be vilified and destroyed. The neo-Marxist attack dogs in the media have the same goal that their comrades in academia, the entertainment world and the Deep State all share: a total remaking of the American nation, including a new people, but they can't accomplish this with tens of millions of non-compliant gun owners. So the media will continue to lie about mass shootings, inflaming tensions when the rare white man is involved with wall to wall coverage and shoving stories like DeWayne Craddock down the memory hole.

Always remember, you are being lied to all day, every day, by people who hate you and want to see you and your family dead.
Posted by Arthur Sido at 10:59 AM