The HBO miniseries Chernobyl is an incredible work. Not because it is telling us something we don't already know about the actual incident at Chernobyl. I remember when this happened and it has been in pop culture for decades. What really makes this new miniseries interesting is the look at life in the Soviet Union, especially in the face of a human disaster.

Probably the best part of the series so far happens in the first episode. As the disaster is unfolding in real time, the local Soviet executive committee meets. Several of the members assure those present that everything is fine in spite of the evidence that everything is in fact not fine. One man speaks up with concern about the air glowing and the safety of his family before an elder member stands up to explain what will be done to protect the state.

This is a chilling speech, with raw malice hidden under a rousing Soviet era speech. (If you are in the UK or Ireland you can't watch this apparently) given by Donald Sumpter, aka Maester Luwin from Game of Thrones, playing Zharkov, a local executive committee member.


It is the same cognitive dissonance those of us old enough to remember are very familiar with from the Communist nations. The Soviet Union, East Germany and the Warsaw Pact nations were a workers paradise! In fact it is so awesome here that we have barbed wire fences and machine guns to kill anyone who tries to leave!

As his speech goes on, he declares that the city will be sealed off so no one can leave and the phone lines will be cut to prevent the spread of "misinformation". The noble goal is to protect the people from themselves. This line was especially chilling:

We are all about serving the people but the people are too dumb to know what it is in their own best interest so we will control every aspect of their lives so they can't make any mistakes. For their own good of course.

It is a little shocking that HBO greenlit this series. For the most part we are not supposed to remember how horrible it was under Communism. The Soviets were our brave allies defeating Hitler so they must have been decent guys. Never mind the repression of their own people or the rape of untold German women as the Red Army crossed German territory. Hitler was bad, dontcha know?!

Chernobyl is a glimpse of a world we thought was dead and buried, where the citizens are secondary to the state. Throughout the early part of the miniseries, everyone but a few are concerned with deflecting blame and passing the buck. At the highest levels the concern is not over the people being exposed to radiation but how the disaster makes the Soviets look to the rest of the world, exposing the lie behind the carefully crafted propaganda of the Soviet myth of prosperity and brotherhood. 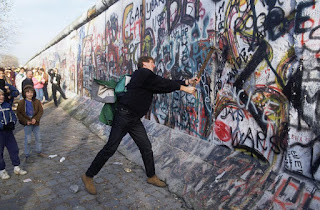 When the Berlin Wall fell in 1989, I was in my senior year of high school and just shy of turning 18. My entire life to that point was inextricably linked to the Cold War and the threat of nuclear holocaust. I went to elementary school in an older building and when we went downstairs to the cafeteria we walk past fallout shelter signs like this one. 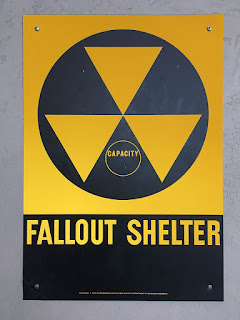 It was a daily reminder as a child that we faced an enemy that had the ability to drop nuclear weapons on us. Then suddenly it was over. We won! Truth, justice and the American way triumphed over the evil Communism. We had seen the horrors of Communism from the gulags to the Berlin Wall, the killing fields to Tiananmen Square. We would never make that mistake again, who would want to go back to a system where people were secondary to the state? 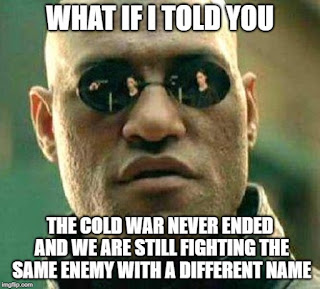 The Cold War never really ended. The major state sponsors like the USSR had fallen but the ideology simply morphed into something else. Rather than a class struggle, now it is a struggle between identity groups. The names and issues have changed but the same kinds of people are still pushing the same sort of crap. From Bernie Sanders and his tavern wench acolyte Alexandria Ocasio-Cortez, we see calls for the false egalitarianism of the Marxist. No one can be allowed to profit or have more than anyone else. Everyone deserves "safe, affordable, adequate housing" (language from draft of Green New Deal). AOC is already using nearly identical language, promising "free" housing for everyone which sounds great until you see the grim architecture of the Soviet. She recently said:

"We have to make sure that housing is being legislated as a human right," Ocasio-Cortez arrogantly stated. "What does that mean? What it means is that our access and our ability and our guarantee to having a home comes before someone else’s privilege to earn a profit."

Again, she is a barely educated former tavern wench so I am confident that her Economics degree not only taught her nothing about economics but instead taught her the exact opposite of how real economics works. Profit drives economic activity. My Amish neighbors who do roofing, framing and other construction don't roof a house and charge exactly what the materials cost. Why bother? They profit from their labor and their learned skills. That is what makes our economy work, even as imperfectly as it does. You can make arguments about the utility and morality of usury, and I would likely agree in part, and also about profit from non-value added activities like manipulating financial instruments but ultimately without profit economic activity halts, or as we saw in the Soviet Union it is done begrudgingly at the end of a rifle. 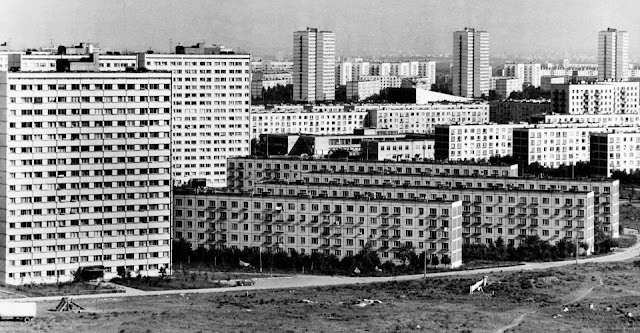 The housing was cheap, uniform and ugly. When people are just economic units, "workers" for the glory of the Soviet Union, you just crammed them into whatever was cheapest and most efficient. That is good enough for the workers, who get "safe, affordable, adequate housing". Leaders like AOC and Bernie? Well we can assume they have a different vision for themselves. Bernie already owns three homes. AOC presumably doesn't see herself living in some crappy "adequate" apartment. Like the leaders of the Soviet Union, it is safe to assume that our would-be overlords expect summer dachas and for the top even summer homes like Stalin enjoyed. They give so much to the State, it only seems fair they be rewarded for their efforts. Besides they are smarter and more advanced than us, we deserve only "safe, affordable, adequate housing" in dehumanizing concrete apartment blocks.

The world that gave us Chernobyl didn't go away. The Marxist revolutionaries didn't quit when the Soviet Union collapsed. Like good little revolutionaries they simply adapted. I am not interested in a future where my family is forced off our modest four acre farm like Ukrainian kulaks before the Holodomor for the "crime" of having a little more than someone else while Bernie vacations in one of his three houses.

There really must be a solution. WWPD? (What would Pinochet do?) 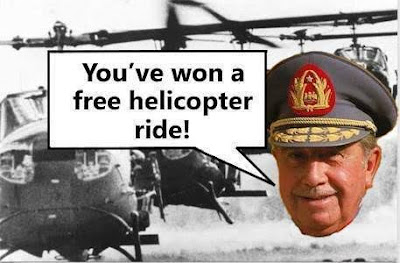