It is a favorite pastime of those in the dissident right/ "alt-right" to mercilessly mock members of the "alt-lite". The alt-lite is made up of pseudo-edgy social media personalities who say borderline naughty stuff while never taking the plunge. People on the alt-lite include Proud Boys founder Gavin McInnes, Youtube philosopher Stefan Molyneux, British Youtuber and Infowars guy Paul Joseph Watson and Mike Cernovich, who mostly seems to be weird and mentally unstable as his claim to fame.

Some in the more mainstream conservative movement and the media see the alt-lite as a "gateway drug" to more "radical" positions on the Right. This is the basis of the shtick of Caleb Cain, someone nobody had heard of a few weeks ago, but who parlayed being a helpless 26 year old seduced into the alt-right by watching Youtube videos into a story in the New York Times. As I pointed out, when I was his age I was married, a college graduate, working full-time and already had three kids. This Caleb Cain sissy can't even manage enough willpower and agency to stop watching Pewdiepie videos or something. He is clearly a shyster, calling himself by the cringe twitter name: Caleb Cain-Former Alt-Right while admitting he never actually believed in anything the alt-right believes in:

When you are trying to run a con, it is important to keep your story straight. People on the Left eat this crap up and the real purpose is to link mostly mild figures like Steven Crowder with the alt-right to give Youtube the excuse they needed to demonetize his entire channel. Caleb Cain will be forgotten by next week but his silly little grift was a way for the Left to continue to silence anyone even mildly conservative or on the Right. As an aside, Trump is mostly worried about black unemployment while his supporters are systematically censored on social media. Very weak focus. Sad!

So anyway, a piece came out from Milo Yiannopoulos that not only accused a couple of homosexuals of defrauding people like Alex Jones and Tommy Robinson, it also accused alt-lie Youtube personality Lauren Southern of not only knowing about this fraud but encouraging it, as well as some tawdry accusations of Lauren using her "charms" to get access to conservative men. I am not going to go into details or link the story, you can find it online pretty easily. My point here is that when it comes to those we associate with, character matters.

This kerfuffle is basically one flaming homo accusing two other fags of being dishonest and immoral, (An immoral homosexual, whoda thunk it?) while accusing an allegedly "trad" girl on Youtube of aiding and abetting these guys. It seems totally coincidental that Lauren Southern announced she was "retiring" from the public sphere at the ripe old age of 23 right as this was about to break. Anyway, it is a reminder that we need leaders who are mature and have their personal lives in order.

I watched Lauren's videos occasionally, especially her documentaries on South Africa farm murders and the NGO people smuggling in Europe, but her persona was an exercise in cognitive dissonance. She used a lot of the language people on the Right use but her videos almost always featured her wearing tight tank tops. She cultivated the "trad" idea but wasn't married and doesn't even a steady boyfriend. I remember this video she did with Brittany Pettibone where they filmed while sitting on a bed together: 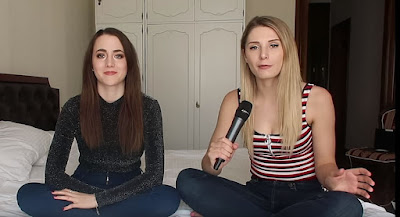 Granted they were in a hotel but there is a sense of "send some Patreon bucks and a pillow-fight might break out!". At least Pettibone is not wearing a "look at my boobs" shirt.

Then there is the sodomite cat fight. I don't know the truth of Milo's accusations against the other two homos but I do know that I instinctively don't trust the word of any man who has sex with another man. I wouldn't trust Milo as far as I can throw him, nor the other two guys. So it really is just a bunch of gossip from people of low character and non-existent morals.

Throw in people like Richard Spencer, with a trainwreck for a personal life, and a few others and we seem to have a problem.

There are people in the dissident right that are not only intellectually sound but seem to have their personal lives in order. Henrik Palmgren and Lana Lokteff of Red Ice are married and have at least a couple of kids. Peter Brimelow of VDARE is married to his second wife Lydia (his first wife died in 2004). John Derbyshire, also of VDARE, has been married for over 30 years. Jared Taylor of American Renaissance is not married but has a long time partner, also over 30 years if I am correct. Many other prominent voices are married and have stable families but keep that under wraps because coloring outside of the lines can be dangerous not just to you but to your family. I understand that but there are limits to anonymity and I have more to say about that issue.

We need more people who are not only right about the issues but provide leadership via personal example. Too many young men and women in our movement spend too much time online and seem clueless about how to form a family. I would rather a young man seek out an open-minded wife and start a family first rather than going all in online and then trying to find a mate afterward. If we aren't building communities via families then this whole thing isn't going to go anywhere. This is in part why I don't like the whole MGTOW (Men Going Their Own Way) movement. First it encourages immoral behavior but more importantly we need stable, traditional families and telling young men that it just isn't worth it with women is toxic and ultimately self-defeating. We need strong families led by strong men and perhaps if we had more of that we would have fewer e-thot grifters batting their fake eyelashes into the camera to get donations from thirsty incels.

Someone who tweets all the right stuff but can't form human relationships is utterly worthless for what is coming. The future won't be won or lost based on rhetoric but on survival. There isn't a political solution to this. Families, neighborhoods and communities are going to survive. Lone wolf social media warriors won't. Spend time forming your character instead of your online persona and speaking from personal experience nothing helps mature you and form a decent character like marriage and children. We don't need the fags and cads and grifters and e-thots. We need strong men of character with strong families.

There is no better way to own the libs than getting married and having half a dozen kids.
Posted by Arthur Sido at 4:03 PM