Catholic Charities: Using Your Donations To Fund An Invasion

As a quick follow-up from yesterday, Border Crisis? What Border Crisis?!, dealing with the news that hundreds of people from the Congo and Angola inexplicably ended up in Central America before coming into the U.S. and claiming "asylum".

From the same news source is this story online:

The information is largely the same but I found this section interesting and disgusting:

Catholic Charities of San Antonio is also responding to the Congolese influx. But Spokesperson, Christina Higgs, told KENS 5 they are struggling with finances. The organization requested additional funding from the United States Conference of Catholic Bishop, a group they work with on their refugee program.

Higgs said they're spending thousands of dollars a week on bus tickets for many of these migrants Spanish and French-speaking to make it to their final destination.

Catholic Charities of San Antonio is spending $14,000 a week to put illegal aliens on buses and ship them off to anywhere they want to go in the U.S. To provide some perspective if they spend $14,000 a week on bus tickets for illegals over the course of a year that comes to:

Almost three-quarters of a million dollars from a single local "Catholic" charity that is being spent to scatter illegal aliens into the interior of the United States where they will disappear from the eyes of law enforcement until they commit another crime. It bears saying that people from the Congo and Angola come from nations that are some of the least developed and with some of the lowest average IQs in the world, well under an average IQ of 80. They don't speak English, they almost certainly have minimal education and little to no job skills. They don't understand life in a liberal democracy and likely don't care. They are simply people being dumped into the already overburdened welfare system of the U.S. that is paid for by working Americans. That sounds callous but we are buried in $22 trillion in debt already with some big unpaid bills coming down the road. We don't have nearly enough money to pay for the promised benefits funded by actual Americans, much less taking on an untold number of people added to our permanently dependent class.

Is this what people donate to Catholic Charities for, bus tickets for Congolese who somehow were able to pay for a plane ticket from Africa to South America, and then for someone to smuggle them to and across the U.S. border so they could illegally enter the U.S.? No one questions how people from the Congo and Angola were able to afford this trip but are also somehow "refugees"? I am not sure where the U.S. Conference of Catholic Bishops gets their money but I am assuming it comes directly or indirectly from the offering plates in local parishes, money that comes from well meaning and likely mostly white Roman Catholics who have been taught that they are obligated to pay for their own displacement. 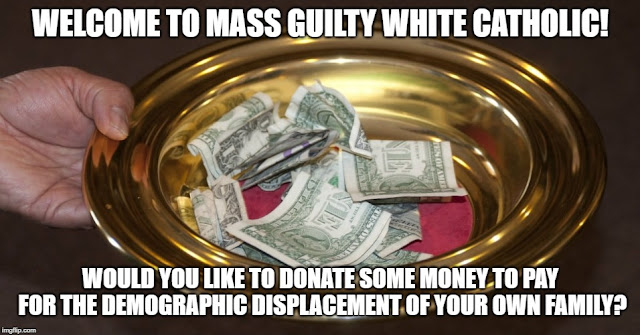 The vast costs of this entire scheme are enormous, only a concerted efforts from groups who have an agenda and a ton of resources could possibly be funding it. Unfortunately a lot of the groups who are funding this mass demographic displacement are doing so under the guise of being "Christian" charities. I am not a Bible scholar but I know my way around the Scriptures and can say with confidence that racial and civilizational suicide isn't anywhere to be commanded.

Before you drop any money in the offering plate, whether you are Roman Catholic or Southern Baptist, you should be checking into where your money is going. You might be surprised to find that it very well could be spent on ensuring that your family and your culture have no place in the future. If you are OK with that, bully for you but if you aren't, maybe it is time to be a little more circumspect about where your tithe and charitable donations are ending up.
Posted by Arthur Sido at 6:59 PM