"But I Disavowed The Alt-Right!" He Cried As They Shoved Him In A Boxcar

On the header of this blog I have this statement:

It is something of a theme for me. Many, many "conservatives", often well-meaning, are of the opinion that if they just distance themselves from the naughty parts of the political Right, they will preserve their "honor" and be left alone by the censorious Left. You can see this on social media from a lot of normie-con types. They just want to be left alone and raise their families and watch their sportsball. They see the country coming apart at the seams but are too afraid of someone saying something mean about them to do anything about it or even speak up. They are terrified of losing their jobs and alienating friends and family. What is even more powerful is the conditioning. The average Boomer/Gen-X normie-con has been indoctrinated for much of their life with the endless liturgy of the Left that teaches that nothing is worse than being "racist" or "sexist". An entire lifetime of being a good parent, good spouse and good citizen can be flushed down the toilet by the merest whiff of racism.

I am not here to argue that "racism" isn't bad but what I am saying is that what the average normie-con thinks "racism" means is not what the power elites in our society say it means. The normie-con gets called a racist and is confused because he doesn't hate black people, maybe has a few black friends and celebrates Martin Luther King Jr. as the greatest American ever. So he sputters and goes on the defensive because he doesn't realize that the Left has literally redfined "racism" to mean "white". You see, "racism" now means being part of a group that has power over another group so "white" automatically equals "racist", whether you are a Klan member or a dirt poor white in Appalachia or a high income white liberal. You are all racist.

This guy provides a pretty solid example. I am not even sure who Ned Ryun is or why I am following him on Twitter but he posted this earlier today. 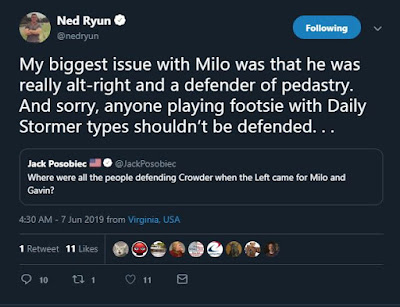 Some obvious issues here. Milo was never "alt-right". Perhaps Ned missed the part about Milo being a homosexual with a fetish for black men. I have said it before, if you don't really understand a term, you shouldn't use it because you just look dumb. Second, and more important, is this:

Poor Ned seems to think that disavowing The Daily Stormer will save him. It won't. I don't read DS because it is juvenile but I don't think they should be censored. Thinking that it is OK to censor someone like Milo because they aren't censoring me is foolish thinking. Once they ban Milo they will just keep moving the line of acceptable discourse and now that people like Ned have affirmed the principle that some speech is OK to suppress, now there really isn't a defense for anyone being censored. If it is OK to censor people because of some really tenuous link to the Daily Stormer, then really no one is safe unless you self-police your speech to the point of being completely muted. Think homosexual marriage isn't all that awesome? Nazi. Question pedophiles being given access to small children at public libraries? No different than the Daily Stormer. Gently suggest we do something to reduce the flow of illegal aliens across our southern border? You might as well be making lampshades from human skin.

When you start off by surrendering the principle, you give up the fight. It isn't a stretch to make a link from even a normie-con to the Daily Stormer so when they come after you, there isn't really an argument to be made on principle, you have to fight about specifics.

A lot of these people are just beyond saving. I guess they will serve as a useful meat-shield when the SHTF.
Posted by Arthur Sido at 2:00 PM