Be Careful What You Wish For

This little news item caught my eye this morning while I was reading a different story:

Alabama church gets the OK to use private police force

Alabama Gov. Kay Ivey has signed a bill that will allow a Presbyterian church to use its own private police force on its campus.

The law, approved two weeks ago, allows the Birmingham-based Briarwood Presbyterian Church to establish a private law enforcement department to make arrests when crimes are committed on its properties.

On the surface, I have no problem with this at all. The church has around 4,000 members and some 2,000 students at their school. A satellite view of their campus shows this is not a quiet little country church: 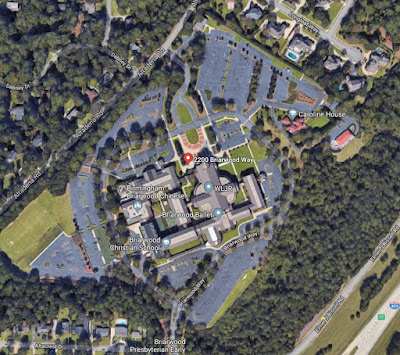 I am also a big advocate of people taking responsibility for their own protection instead of relying on the state. This would seem like a no-brainer.

Here is the problem. Along with the 1st Amendment guaranteeing religious liberty, we also have the 14th Amendment that states in part (emphasis mine):

No State shall make or enforce any law which shall abridge the privileges or immunities of citizens of the United States; nor shall any State deprive any person of life, liberty, or property, without due process of law; nor deny to any person within its jurisdiction the equal protection of the laws.

So that means that if a Christian church can have a private police force, so can an Islamic mosque. I wrote earlier this year about the troubling practice in New York of having a Muslim patrol running around the streets wearing uniforms and driving cars that are marked in such a way as to be easily confused for actual New York City police (See: Encroaching Ethnic Balkanization ). Here is a photo of the Muslim patrol: 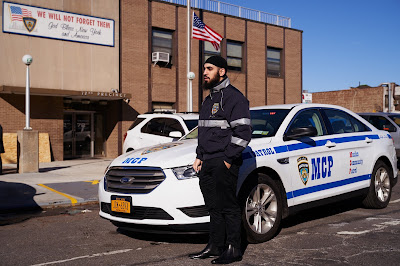 That is pretty hard to distinguish at a glance from a real New York cop.

The problem I see is that when we start to let the various religious and ethnic groups have police forces, it can lead to unintended consequences. I don't worry about Briarwood Presbyterian, even though they are dirty baby dribblers, but giving Muslims the independent authority to arrest people? Right now it is only on private church property but what if a neighborhood becomes 100% Muslim, and they are given the same authority. Will Muslim private cops be given the right to pull me over if I am driving on a public street through their neighborhood because my wife's head isn't properly covered (she does cover her head already)? Why not gay private police for heavily homosexual areas? Perhaps they can require you to have a pride sticker on your car to drive through their neighborhoods.

If I were to say that my rural neighborhood is overwhelmingly Christian and we are going to organize an expressly Christian neighborhood watch, the ACLU would go bananas. So would the ADL and CAIR and every other non-Christian advocacy group.

In a sane nation you wouldn't have to worry about that happening but we don't live in a sane nation. Our laws and framework were written by and for a homogeneous population with common ancestry and culture. No one writing the Constitution or the 14th Amendment could have imagined an America without an ethnic and religious supermajority. The Constitution was written to:

...secure the blessings of liberty to ourselves and our posterity...

As we unwillingly move into a pluralistic mess of balkanization and tribal rivalry, it is terribly important that we think through the worst case scenario of misusing laws. If Christians can have private police forces, so can Muslims and Hindus and Jews.

Be cautious of the law of unintended consequences.
Posted by Arthur Sido at 8:04 AM