As someone who has been into fantasy and sci-fi literature since I was just a youth, an early adopter of Dungeons & Dragons, read Lord of the Rings when I was in elementary school, etc., I was naturally interested in George R.R. Martin's series "A Song of Ice and Fire". I had already read all of the available books long before the HBO series "Game of Thrones" was released, and read the rest subsequently and in general have been OK with the TV adaptation, understanding the limitations based on budget and just plain reality of scope. Sure the battle of Blackwater Bay was pretty underwhelming but having 20,000 extras on camera wasn't realistic. It has gotten better in recent seasons as technology has improved and their budget increased. Having said that, the most recent episode of GoT was pretty disappointing in a bunch of ways, most notably for having Arya Stark pull a full Mary Sue and kill the Night King.

Lots of people were disappointed, especially the heavily invested fans who were book fans before the TV series, but that is the perogative of screen-writers. At least they wrote something, while Martin (at a corpulent 70 years of age), is starting to look like he might never finish the book series. However we are living in Clown World 2019 and that means that people are going to be pissed for the dumbest reasons in the world and still get taken seriously. Black Pigeon Speaks assembles some of the dumbest:

Yes, the Dothraki and Unsullied were immigrants. Actually they were foreign invaders, which more closely matches the reality of our own illegal alien problem.

BPS makes some great points. The Unsullied are eunuch mercenaries, merciless killers, so once the Iron Throne was won, what do you do with them? Give them little farms so they can raise crops? The Dothraki are often referred to as the horde, and are portrayed wild barbarians that make the Mongols look peaceful. They take what they want and are pretty fond of rape (the rape of a captured woman "rescued" by Daenerys features prominently in the early story). They live to fight and pillage. They also were not going to settle down peacefully and become goat-herders.

These people can't even leave a FANTASY world alone, they have to try to inject their identity politics into it. As I have said so many times, the progressive Left is a fanatical, fundamentalist and violent religious cult. Everything must be viewed through their social justice goggles.

These are also people that don't seem to understand that these are fantasy worlds. If they perceive an injustice in a fantasy book, that is basically the equivalent to a real world "injustice". The Dothraki were wiped out in a valiant and foolish charge at the army of the dead. In the TV series the Dothraki are brown skinned and crossed the sea to Westeros. The person that sent them on this charge was white and cis-gendered. Ergo this is just like keeping kids in cages at the U.S.-Mexico border. Don't try to follow the thought process, there isn't one.

These people really think if they wave a stick at you in just the right way and yell "Avada Kedavra!", they can kill you and they fantasize about what house at Hogwarts the sorting hat would place them in. People like this child that claimed that the NRA was a "terrorist organization" and that members should lose their right to vote: 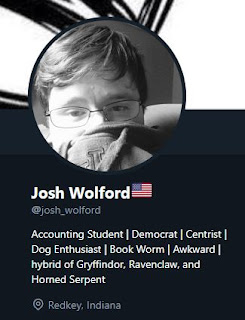 He has plenty of time to read and reread the Harry Potter books while he is not going out with real-life girls.

You can't have reasonable discourse with people that live full-time in a fantasy world, especially a fantasy world that is endlessly shifting and malleable.

Therefore trying to convince them by reason and logic of your position is likewise a waste of time. The battle lines are being drawn and the sides are being picked. I have no time to try to convince people that never emotionally matured past 5th grade of complex political, social and scientific questions. It can be amusing to troll them but that is a time-suck you have to be aware of.

My target audience are fence-sitting people who steadfastly have refused to take a side. It is growing obvious to them who their enemy is, but they are resistant to seeing who their friends are thanks to lifetimes of indoctrination. There are very few committed ideologues on our side of the fight as most of us are focused on real life issues but our enemies, and they are enemies who quite literally wish to see us dead, are focused only on one thing: winning the fight for the future.

We won a short respite thanks to Trump's election. He isn't going to save us, he is barely going to delay the inevitable but he did buy us a little breathing room. This is the time for getting yourself ready for the main event, physically and mentally; gearing up and gathering friends.