Way back in the day, 1984 to be exact, a film hit the theaters that would become one of the most iconic films of modern times. The Terminator, starring a young Arnold Schwarzenegger back when he could barely pronounce most English words, spawned a number of sequels, reboots and a TV show that was actually pretty good and thus was canceled. Millions of people have said "I'll be baaack" in imitation of Arnold. The sequel, Terminator 2: Judgment Day, was actually a much better film and the liquid terminator effects were amazing in 1991. I am one of the few that liked Terminator 3 and I even liked Terminator Salvation. Genisys was awful. In a better world, the series would stand as is and we could just enjoy the films. Even though the effects are really dated, I still enjoy watching the first two movies now and again. Of course we don't live in a better world, we live in this one where machines taking over and nuking humanity doesn't sound that terrible.

In the modern film era, there is no risk taking and no innovation. We get endless remakes of classic films, awful sequels and superhero movies. It is rare to see anything new or interesting. So naturally one of the most iconic film franchises ever is going to get a reboot, Terminator: Dark Fate, apparently picking up right after Terminator 2 and pretending none of the other films happened. We saw a screen still a while back.... 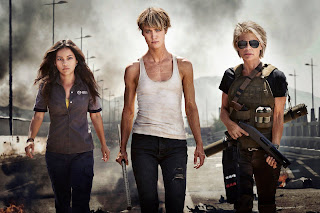 Then the trailer was released. Double ruh roh.


Allow me to summarize:

You have a male Hispanic bad terminator.

You have a butch lesbian-looking female terminator.

You have the young Hispanic girl that is apparently the one being protected.

You have her Hispanic brother.

You have grrrl power Linda Hamilton, at 62 all buffed up to look more like her Terminator 2 character than her original Sarah Connor the waitress in the first movie.

You have a cameo from Arnold but I am guessing based on the still photos released that he won't be in it much.

Sarah Connor's son John, the designated savior of mankind and Sarah's love child with Kyle Reese, doesn't seem to be anywhere around based on the trailer and the cast list. Too white, too male.

The CGI also looks awful in the trailer and that is a bad sign.

Overall it looks like a combination of "how many explosions can we pack into a film?" and "can we form a central cast that has no white men?".

It isn't that I don't think non-white male actors should be in films. It is simply that it would be nice if films were specifically written for those actors. Even though Black Panther was not a terribly good movie that was massively overhyped, it was a mostly black cast playing characters that were understandably mostly black. It wasn't taking a Norse god, Heimdall, and casting Idris Alba to play him. Idris is a great actor in what I have seen him in, notably The Wire, but to pretend that you could have a black guy as the Norse god Heimdall is ridiculous. It would be like casting a Korean woman to play the Egyptian god Amun. The racial identity of Norse gods is not incidental to their character, it is their character. No one would cast Matthew McConaughey as T'Challa because that character is specifically black.

What I wonder is why the emphasis is not on these groups demanding "representation" writing material that they are naturally "represented" in. Using Black Panther again, there were very few white actors in that movie and the ones we saw were generally bad guys. That is fine and it makes perfect sense because the movie is about an African kingdom. I wouldn't want to see Japanese or Guatemalan actors because it wouldn't make sense. You wouldn't do a biopic of Shaka and cast a short Polish actor to play him.

Being a white male isn't the central point of The Terminator series but it is a story about Sarah Connor, a kind of meek white waitress, being forced to take on a new role to protect her son John. Sarah was written as a white woman. Her baby daddy Kyle is a white guy. Their child is a white kid. That is how the story was written by James Cameron. I would love to see a dystopian sci-fi show written specifically for black characters. It sometimes seems like "woke" Hollywood has so little faith in black characters that they are more comfortable hijacking an existing series and shoehorning a laundry list of diversity into the cast just for the sake of having non-white males in the lead roles.

Getting a part because of your race or gender isn't justice or representation. It is pandering. Terminator: Dark Fate probably will make a bunch of money at the box office riding on the name recognition but I would be willing to bet now it is going to be a terrible movie.
Posted by Arthur Sido at 5:24 PM