What would have once have been written as satire is now reported as super serious and important. Exhibit A:

Turning over a new leaf? Muslim model Halima Aden makes history as the first woman to pose in a BURKINI for Sports Illustrated's iconic Swimsuit Issue

Awesome. Look at this 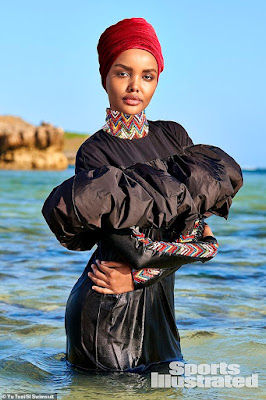 Halima Aden is a "21-year-old Somali-American", also known as a Somali. She lived in a refugee camp and came to America as a small child. Now she is modeling a swimsuit that covers her up almost completely. Although she is yet another African refugee given shelter in America, she still seems resentful that there was not enough "representation" for her in the U.S..

Representation is important for Halima, who grew up at a time when there were very few women who looked and dressed like her in the media.

'Growing up in the states, I never really felt represented because I never could flip through a magazine and see a girl who was wearing a hijab,' she explained in the clip.

What she seems to not understand is that the fact that there are not a lot of women wearing hijabs in America is precisely why it was a better place than where she came from. If she wants "representation", she can go home to Somalia and see how trying to be seductive on the beach is responded to by her fellow Somalis. People flee to this nation because it is not full of people like themselves. They flee from places like Somalia because it is full of Somalians.

For the record, I am not opposed to full coverage swimsuits. Most girls at the beach are wearing what amounts to their underwear. You can swim without getting virtually naked. Amish girls wear a swim dress and still manage to have fun in the water. So it isn't a matter of not showing enough skin.

However what is interesting and more than a little gross is the fawning response from the media about this. You would think that a woman who is part of a culture that suppresses femininity by forcing women to cover themselves up would be the exact opposite of what feminists would applaud but you would be wrong.

Feminism is not a progressive movement, it is perhaps the most reactionary political movement around. Whatever is associated with or viewed positively by white men, especially Christian white men, is bad so feminism automatically and reflexively embraces whatever is contrary to what they see as white male patriarchal values. Why else would feminists embrace a culture where women are forced to cover themselves head to toe and have their genitals mutilated so they can't experience sexual pleasure? So even though Islam is the most patriarchal and misogynistic of world religions, it is embraced by feminism as an "ally" because Islam declares itself to be the enemy of whites, Western values in general and Christianity. To Muslims those are all indistinguishable. To be white is to be Western is to be Christian.

For decades feminism has told women, mostly white women from Christian homes, that the only thing that prevents them from being happy and fulfilled are white Christian men. Once they overthrow the white patriarchy, all of their dreams will come true. The opposite has been true. The more "liberated" women are, the unhappier they seem to be.

Here is a great example of the cognitive dissonance of feminism.

The Handmaid's Tale is a wildly popular TV series based on a book about a dystopian future where Christian fundamentalists take over America. It is embraced by feminists convinced that white Christian men are on the verge of taking away their "right" to murder their own children in the womb. During the Brett Kavanaugh hearings a handful of cat-ladies dressed up in the costumes from the show in what was intended to be some ominous warning. They really seem to think this fantasy future is on the verge of becoming true any day now and that they will become sex slaves of a patriarchal society and be forced to wear clothing that covers them up. 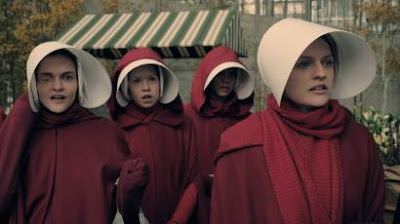 So...a highly authoritarian religious system that is dominated by men, that controls what women wear and restricts women's sexuality. Gee that sounds really, really familiar but I can't place it....

The same women who angrily watch The Handmaid's Tale while chugging down boxed wine are praising the "bravery" of a woman forced to wear a burkini by the same culture that mutilates the genitals of little girls so they don't become wanton whores when they get older. They don't see the real and present danger of Islam on their cherished feminist victories but they are incensed and terrified of a made-up threat based on a TV show.

On the other hand, I sometimes suspect that many "feminists" are repulsed by the sissy men that they have created and secretly yearn for a masculine man to treat them like crap. Maybe they watch The Handmaid's Tale and wish someone would make them a sex slave?

For now Ms. Aden gets to wear the burkini as a matter of choice and flighty feminist women get to pretend that wearing a burkini is somehow brave and empowering but the days are coming when the burkini won't be optional anymore. Ironically the only thing standing between a future patriarchal dystopia where women are property and sex slaves is men like me, the very men feminists revile and fear.
Posted by Arthur Sido at 9:00 AM