Size Matters...But Only To A Point

Commander Zero has a handy flowchart for those worried about their 9mm being big enough to stop an assailant. 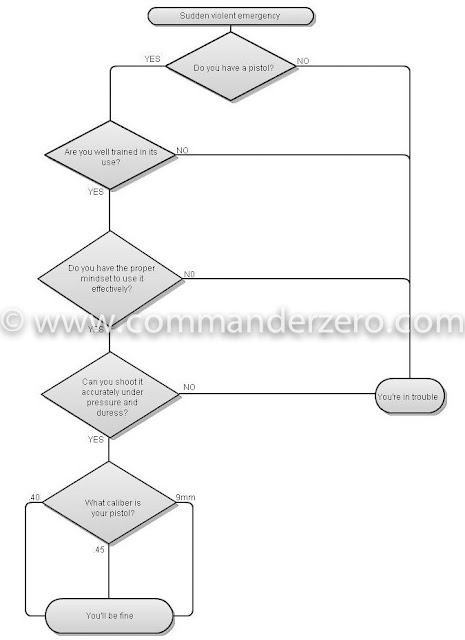 The interwebz are full of "experts", many who have never shot a gun in anger (nor have I and hope I never have to) but are convinced that only their favorite caliber is adequate. For some .40 is the bare minimum, for others it is .45. There are no doubt some people out there insisting that anything smaller than a .454 Casull is a guarantee of an early grave. It is mostly a load of crap.

While a .22 or .25 probably will kill someone eventually, they aren't going to do it quickly and a wounded assailant is still dangerous. If they are shooting at you, you want them to stop shooting at you. I am not a sure enough shot to try to hit someone in the head with a .22 under duress, so you really need something with more oomph. Sure a .45 will leave a fist sized hole going out and that ends any altercation, but smaller calibers like 9mm or even .380 using a decent ammunition will also kill someone quickly. There are lots of factors besides "how big a hole does it leave?". Can you carry it comfortably? Are you confident in your shooting ability? Is the recoil going to make you flinch and make it very hard to accurately get off a second or third shot? If you watch some videos, you can see shootouts between cops and bad guys where they both blaze away at each and no one gets hit. Cops train extensively to shoot but under duress it is easy to miss even at short range, especially so with the shorter barreled pistols most people are carrying. If your first shot with a .45 goes awry, you have to refocus and get the next shot off. With the minimal recoil of a .380 that is a lot easier to do. Maybe you train enough to feel like you can get the second or third shot off with a .45 or .44, or perhaps you are just a badass. That is fine but in a stressful situation, having a gun you are comfortable shooting that you can fire multiple times accurately and rapidly is critical.

As always, the best caliber gun is the gun you are actually carrying. If you are going to carry, get something you are comfortable shooting and get good at it. That will solve 99.9% of the possible scenarios you might run into. Let others worry about using a cannon to boost their ego.
Posted by Arthur Sido at 2:00 PM