With apologies to Britney Spears.

It appears I have angered some purple-haired gender-fluid freak sitting in a tiny cubicle in the bowels of Twitter HQ for another example of "hate speech". I was suspended for 7 days this time, so I appealed the suspension which will no doubt  be rejected but in the meantime they punish you even further for your failure to submit by not even allowing you to view Twitter. At the same time my other accounts were magically locked for "suspicious" activity, until I had a text sent to my phone. What was my ThoughtCrime this time you may wonder? 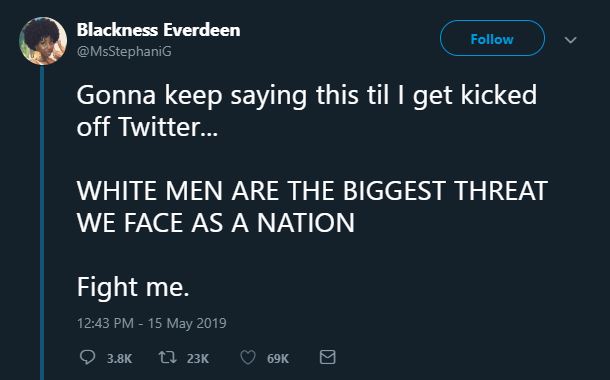 Please note the sweeping generalization that demonizes an entire race of people, as well as committing a crime against history because without white men there wouldn't be a nation here, nor would we have things like the internet and twitter in the first place.

Blackness Everdeen is an example of cultural appropriation, using the name of a female white character from "The Hunger Games", Katniss Everdeen, who is the creation of a white female author, Suzanne Collins. So obviously using her character's name in that way is racist. This person is a pretty typical of the inexplicably self-confident youngish black woman on Twitter. 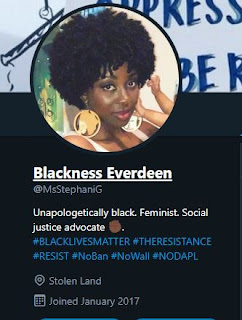 Black Lives Matter, no wall (even though illegal alien labor hurts blacks more than white, they don't care because "muh shared enemy whitey"), resist, etc. In general her tweets are inane and she seems to spend a lot of time a) reporting people who respond to her or replying back with juvenile insults and completely dumb gifs and b) reporting anyone that replies with anything other than guilty white groveling and self-loathing.

Even though I know better, I replied back to her. Again this is a waste of time. People like this are incapable of critical thought and unable to respond to anyone with any substance more serious than making incest jokes. But I did it anyway, here is the response in question: 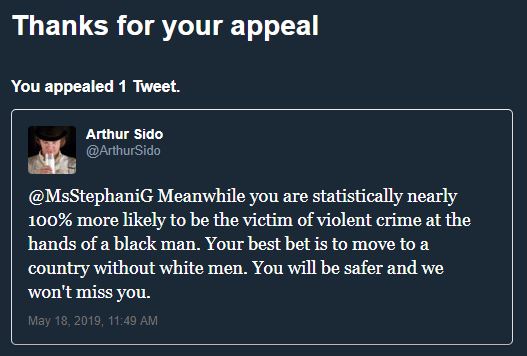 That is a completely verifiable fact. The majority of violent crime in this country is committed by black men. When you add in Hispanics, Middle Easterners and various other non-white men, what you find is that white men are wildly underrepresented when it comes to violent crime. So what exactly is wrong with this statement? Also whites are the majority in this nation (seeing as how we built it) so if she thinks white men are such a danger, there is nothing to stop her from moving somewhere with no white men. Problem solved. Plus we won't miss her. What exactly is she proposing we do about this "white man" problem? If they are such a threat, is she talking about rounding us up and putting us in concentration camps? Deporting us to Estonia? Just killing us off? This rhetoric from her is not only racially charged, it contains an implied threat. Twitter of course will see it as perfectly fine.

It is pretty clear that twitter is mass suspending anyone that replies back to her tweets while leaving her tweet and others like it untouched. She spews nonsense about white men being a threat to the nation that they created and yammers about "white fragility" and her account is untouched (I did report this tweet on another account, undoubtedly in vain).

No surprise here. I know Twitter is hostile territory where people on the Right are regularly suspended for little or no reason while imbeciles and racialist grifters on the Left are unmolested. I also know that social media like Twitter, Facebook, etc. is the equivalent of the town square in our national discourse and that they are cracking down on dissident thought. Trump has made noise about this in the past but done nothing about it. People on the right are systematically being shut out of the public discourse, leaving only the approved Conservative Inc.™ controlled opposition "conservatives" (Ben Shapiro). The inability to engage in the marketplace (and I know that trolling low IQ idiots is not really engagement) is going to make the already challenging task of getting a Right-wing message out to the swayable normies.

I know the "libertarian" argument. "Private companies" can do whatever they want! Do you want the government to control private companies?! Are you some kind of libtard socialist?!?!?!?!

That is swell in a discussion online but in the real world we don't live in a free market. Twitter and Facebook have near monopolistic control over the social media marketplace. Those who try to break into the market are attacked in ways that would make the old robber barons proud. The attempts by Gab to create an alternative platform have been instructive. Gab has been repeatedly shut out of app stores and since only a handful of companies control the apps on smart phones, that is hard to overcome. Gab has been booted by their web server multiple times for bogus reasons. The have had a ton of problems with payment processors. Andrew Torba keeps punching back and is making some real breakthroughs but the truth is that social media companies, banking conglomerates, tech groups and the government itself are working in concert to suppress right-wing speech. Tell me more about this free market thing.

This is another example of conservatives and libertarians surrendering the fight by agreeing to rules that the other side ignores with impunity. That is a recipe to keep losing and your "principles" won't feed your family or keep you warm in the gulag (see: Fighting In A Cage Using The Queensberry Rules for more on this).

The first time I was suspended on Twitter, (for calling Kirsten Powers of USA Today a bimbo, something I stand by because she isn't very smart at all but she is kind of pretty, and everyone knows she wouldn't have a job like this if she were ugly. See also Tomi Lahren) I was kind of mad about it because what I said was pretty tame. Now I just take it as part of the cost of doing business in our world. I don't hide my identity at this point and I don't pull punches. That means I am going to get suppressed by the fruitcakes at twitter and at some point my account will just go away, something I am already planning on.

This can be tiring but we can't rest or throw our hands in the air in frustration and quit. The other side will never quit. This is their religion, the whole reason for their existence and the only goal they have is total victory. If you aren't a black transvestite illegal alien Muslim, you are not going to like living in the world they want to create.

Listen, and understand! The boxed wine drinking cat lady lesbian is out there! It can't be bargained with. It can't be reasoned with. It doesn't feel pity, or remorse, or fear. And it absolutely will not stop... ever, until you are dead!