In 2016 Donald Trump swept in and won the Republican nomination, defeating a crowded field of generic Republican Conservatism Inc. candidates. Trump talked about things that appealed to actual conservative voters, as opposed to Beltway think-tanks and the Chamber of Commerce. First and foremost, he promised to build a wall, secure the border and enforce immigration laws. Instead we have a completely open southern border, the Feds shipping illegals into the interior of the country where they disappear, no wall and no immigration reform. The border is being overrun on a daily basis and Trump's signature campaign pledge seems mostly forgotten other than occasional tweets muttering impotent threats.

So what is Trump focused on today? An issue that is really important to his base that will convince them to show up to re-elect him in 2020? Well, see for yourself.... 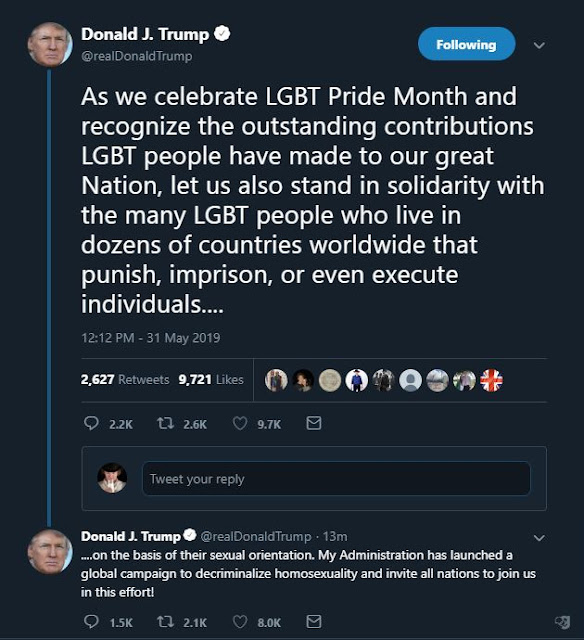 Well that is just swell! When can we start ordering our pink "Make Sodomy Great Again" hats, manufactured in Mexico?

Trump is ceaselessly chasing after voting demographics that will never vote for him in 2020. Black voters don't care about the black unemployment rate, they vote monolithically for Democrats and are all convinced Trump is the devil because Tribe > Economics. Candace Owens is an uninteresting token, a talisman "conservatives" can point to and exclaim that they are clearly not racist because they follow her on twitter. She is not a harbinger of Blexit or some other nonsense. Homosexuals and other sexual deviants are also sold out for Democrats. There is nothing Trump can do to change that.

Meanwhile his base is getting shafted and ignored at every turn.

Trump is turning into the greatest disappointment since every single Star Wars film made after Return of the Jedi.

If Trump expects his base to show up in 2020 to vote for him after getting nothing he promised other than some solid court nominations, and after expending all of his effort moving the embassy in Israel, crowing about black unemployment and virtue tweeting to sexual degenerates, he can go ahead and start making vacation plans for 2021 because he won't be in the White House.
Posted by Arthur Sido at 3:38 PM