It is difficult to look around and not see parallels between modern day America and other once proud and/or powerful, civilizations that collapsed. Rome is the most common example but the Soviet Union exhibits some of the same characteristics. There are obvious differences of course. America is a physically enormous nation with over 330 million people, significantly more than the Soviet Union when it collapsed. Technology is far more advanced so we will be able to watch the collapse in real time. Perhaps most significantly, the sheer firepower of the American private citizen is without peer.

Without straining the analogies too much it is growing clear to many people, and more each day, that we are in the end times of the American and Western experiment. The less perceptive among us, all along the political spectrum, are still arguing about things that won't matter soon. Trump spends his days impotently tweeting about things he promised to do two years ago, opining on the results of the Kentucky Derby and getting into petty squabbles with idiots like Paul Krugman. Meanwhile Democrats are trying to control their low-IQ/high-energy younger "leaders" to keep them from pushing for "impeachment" while at the same time trying to convince a party sold out on identity politics and #MeToo that the right choice to face Trump is creepy old white pervert Joe Biden. The Democrats think that the latest round of gibs is going to delay the inevitable. The smart people are talking well outside of the conservative-liberal dichotomy and asking questions about the future to come. More on this later.

The clearest warning signs of the impeding collapse are found in the sheer degeneracy of the culture. For decades America has become a very un-serious, often quite silly nation obsessed with stupid crap. Absent the threat of the Soviets, we have been wallowing in the very lowest of pop culture, sports and vulgar consumerism. The only interruption was 9/11 and even that only lasted a short time. While we have been at war in Afghanistan and then Iraq for the better part of 20 years, most Americans are barely able to form a coherent sentence while staring intently at their phone and desperately waiting for a new, much more expensive version, of the same phone to become available.

For example, check out the headline from this story I found accidentally while searching for something else: 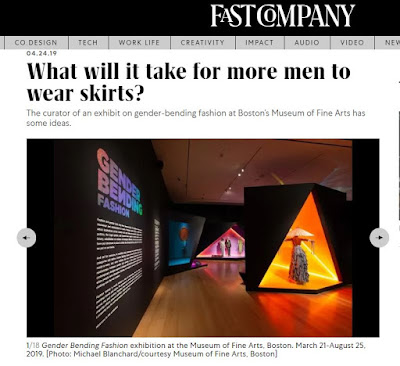 Who is asking this question outside of some fruitcakes in New York City? This isn't even a topic of conversation in 99% of the counties in America.

As someone in my mid-40s I can't imagine this sort of conversation even being considered ten years ago but this website, "Fast Company" has 2.3 million followers on Twitter and 1.2 million likes on Facebook. Stories that ponder what it will take for more men to start cross-dressing like women are getting in front of a lot of eyeballs. As someone who used to do quite a bit of hiring, I can tell you that a dude walking in wearing a skirt, no matter how "professional", would go right in the reject pile. I assume this is true for virtually all hiring managers outside of the big urban centers, even if they would never say so publicly today. Trannies were once rightly relegated to the dark corners of society, the seedy underbelly that normal people never saw and that only interacted with fellow perverts and vice cops.

Then there was this from "Men's Health"

First off, no actual man I know is interested in being anally penetrated by his partner. Second, the recreational sticking of things in your rectum is the opposite of healthy. This really shouldn't be appearing in a magazine called "Men's Health".

Of course there is the now near ubiquitous pictures of absolute freaks grooming little boys that have been perverted into dressing like little girls. 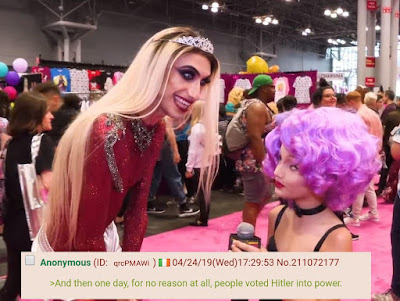 In a sane society, not even kidding, people like the kid on the right would be sent to military school and had his ass beat the first time he put on a dress and degenerates like that freak on the left would be in a shallow grave or better yet swinging from a lamp-post as a warning to other degenerates. If I was leering at a little girl the way that guy is leering at that boy, her dad would beat the crap out of me and no jury would ever convict him.

Like I said, you don't have to go searching for this stuff. It is in your face 24-7. Long gone are the subtle additions of perverts into mass media to soften resistance. Now it is right up in your grill and pointing out that a creepy dude wearing a dress and tiara is a mentally ill man, not a woman, is considered a hate crime and "violent" speech.

America is a nation that is not really a nation at all. We are a bunch of unrelated tribes of people that are suspicious and often openly hostile toward one another. Half of us pour tax money into the gaping maw of the Federal government and then the government pays that money out to the other half. The government is mostly a wealth transference scheme on an unparalleled scale. Well connected corporations get fat government contracts and tax loopholes while reliable low-income voters are provided with de facto bribes to keep voting for the status quo. Meanwhile the shrinking middle and working class are squeezed and squeezed some more, while being scolded endlessly for not doing more to prop up the system that is working to crush them. We have no national identity and are told that the only thing that makes you American is having a Social Security number. Hundreds of years of history, from the first settlements on the east coast to the thirteen British colonies, our war for independence and the war to forcibly hold the Union together, conquering and taming a continent of 3.5 million square miles, criss-crossing that continent with railways and highways, our contribution in World War I and our great national effort in World War II. All of that is nearly forgotten. All that people know about our history is that the Indians were defeated and slavery was legal in the south. Oh, and internment camps for Japanese although almost no one could tell you within a decade of when World War II happened.

Not for nothing is the end of World War II and the decade that followed considered by regular people to be the golden age of America, when we were at our pinnacle. Europe was devastated, Asia as well. The American nation had no peer and our only rival was the tyrannical Soviet Union. The contrast was stark, the freedom and prosperity of America contrasted with the grim desperation of Communism. The great space race, won by the U.S. with the landing of men on the moon, marks the end of that era. Since that time America has largely been a nation without purpose. We opposed the Soviet Union but even that was out of fear of nuclear war and international Marxism spreading rather than an affirmative goal. Shortly before the moon landing we saw the passage of the Hart-Celler Act, also known as the Immigration and Nationality Act of 1965. As we lost any sense of unifying purpose as a nation, our "leaders" paved the way for a massive demographic displacement that is finally being realized today.

Fast forward to today and you see a nation devoid of unity and equally devoid of purpose. What is the point of the U.S. today? Why are we even a country other than sheer inertia? Half of us are hoping in vain that we will magically go back to better times as a nation, at least when they can be bothered to turn off the sportsball game or the newest iteration of The Bachelor. The other half hates everything about the U.S. and especially hates the heritage American people, seeing them only as resources to be extracted until there is nothing left.

Between the outrage of the day and the now non-stop election cycles, we are wandering aimlessly through life as a nation, living separate lives. We share little in common today, have wildly different understandings of our past as a nation and absolutely lack any unifying purpose or principles for the future.

With nothing to unite us and little that is significant to inspire us, we drift along seeking out meaningless distractions to pass the time.

At the same time the most degenerate among us are coming out of the shadows, first demanding "tolerance", then demanding "acceptance" and now demanding obeisance. A nation that tolerates perverts dressing up as demons and reading to confused little kids at a library while their mothers watching approvingly is not a nation that can be preserved. Nor should it. No one dressed like those freaks would get within 50 feet of one of my kids and if they tried, it would end badly for them.

We can't go on like this, a dwindling heritage population subsidizing the degenerate and the indolent. No nation can. The basis for all human civilization is the stable family unit and we have been doing our best to destroy that for decades. Now we are about to reap the results. Instead of a classless, raceless, genderless egalitarian utopia, we are approaching a systemic collapse. Maybe the trigger will be a financial crisis or runaway inflation. Maybe the latest Ebola outbreak will make it to the U.S. Or maybe the violent thugs of the Left will finally push the wrong person. Whatever the trigger, it is coming and the pedophiles dressed up like fairy princesses are going to have the worst of it.
Posted by Arthur Sido at 1:07 PM