A cop shoots an unarmed civilian. A jury finds the cop guilty of third-degree murder and second-degree manslaughter. Justice, right? Nope, now they are mad because the cop was black and the woman he shot was white so of course the decision was "racist".

In 2017 a Somalian police officer in Minneapolis, Mohamed Noor, was in a patrol car with his partner responding to a 911 call. Noor was a diversity hire, placed on the force to add some Somali street cred in a city where Somali crime is skyrocketing. The woman that made the 911 call, Justine Damond, came out to talk to the police wearing pajamas. As you can see from this picture, she looks like a very dangerous individual.... 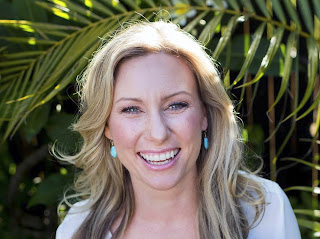 I can see why she would be viewed as a threat. Noor's own partner admitted that the shooting was "premature", a pretty big admission from a cop as they tend to protect one another. Perhaps Noor shooting Ms. Damond through his partner's window (in other words across his partner's body as Noor was in the passenger seat) was a factor? Also of significance, Noor already had three complaints filed against him in his two years on the force.

According to reports, Mohamed Noor was startled by a loud noise, a "bang" on the police car. Forensic evidence did not show any sign that Ms. Damond touched the car. Did the "bang" actually happen? I doubt it. So why did Noor shoot an unarmed 40 year old woman in her pajamas? I doubt we will ever know the truth. What we do know is that Justine Damond is dead, Mohamed Noor killed her and he has been found guilty of murder and manslaughter. I will reserve judgement on Justine getting justice until Noor is actually given a serious sentencing and his appeals are exhausted. There are plenty of "judges" that will do their best to let him get away with this. But for now, Noor has been tried and convicted of his crime.


The facts of the case don't matter. The "activist" community sprang into action and condemned this decision. Of note, according to Fox News:

The jury included 10 men and two women. Six of the jurors, including the two women, are people of color.

As of 2010 Minneapolis was a little over 60% non-Hispanic white (aka "white"). Assume that has gone down a bit. The city is still at least half white. So the jury of 12 had 6 white and 6 non-white jurors, which matches the city pretty closely. That doesn't matter apparently. Also from Fox:

John Thompson, an "activist" claims that Officer Noor was going to jail because he's a black man who shot a white woman.

No, he is going to jail because he murdered a woman. Notice there is no concern for the dead white woman but tons of outrage that a black man who murdered a white woman is being convicted of murder. Almost like they don't care about the facts, they only care whether or not their team wins.

How can we keep pretending we live in the same country? I would assume most white people, if you could get an honest answer out of them, are certain that justice was done in this case. The shooting of Justine Damond was unjustified and unprovoked, not to mention incredibly dangerous to Officer Noor's partner. The races involved are not that important here.

To a significant chunk of the black population, it is an unshakable article of faith that a black man can't get a fair trial in America, even when he is tried in a court of law by a jury of his peers. In this case the jury of his peers included 50% non-whites and they still voted to convict him. If you believe that the only way a black man can get a fair trial is if he is tried by a jury comprised only of blacks and is tried before a black judge with black lawyers, then you are saying that racial separation is the only way black people can get a fair shake. They need their own courts, their own schools, their own cops. In other words black nationalism is the only reasonable political position for a black person to hold. The endless clamor about "white supremacy" and "white privilege" and "rising white nationalism" should lead inexorably to the logical response: separation. Why would blacks want to live in the same country as me, under the same laws as me and subject to having people like me voting and sitting on juries? Listen to convicted murderer Mohamed Noor's, a man only hired by the police because they thought they needed Somali cops to police the crime ridden Somali neighborhoods of Minneapolis, fellow Somali refugee Ilhan Omar declaring:


“This is not going to be the country of white people.”

Please explain to me how this is not a declaration of a race war and a promise to replace white people?

As a reminder, this "country of white people" took her in and gave her shelter when she and her family were forced to flee from a country of black people. They fled here precisely because this is a "country of white people". In return she has been an endless scold, criticizing people who built a civilization that her own people are incapable of building. People from Somalia don't want to flee to nations full of Somalis, they want to flee to nations full of people like me. I don't blame them, no one wants to live in a nation full of Somalians but when they escape from their own people and are given shelter, they then turn around and screech at us for not being like them, when they were fleeing from people like themselves in the first place.

How are we to dwell together in this nation when we don't have a clue why we should? The Zman had a great quote today in his post Open Air Absurdistan:

Saying “this is not who we are” seems to track with not knowing who we are or why we are even a “we” anymore.

Anyone saying "that is not who we are" has no clue who we are or who we ever were.

Who are we? When "we" can't even agree on something that simple, "we" are not really a "we" at all. "We" are just groups of people that happen to live within the porous boundaries of what used to be a nation. The individual states voluntary and democratically agreed to form a union of states for the common good. It is time for us to dissolve those ties that bind us politically and form new unions. The only other option is open warfare that will make the first Civil War look like a walk in the park.
Posted by Arthur Sido at 12:39 PM