It Isn't Race Based Admissions If You Call It Something Else

The College Board, the company that administers the SAT test most college bound students take as part of the admissions process, has found a new way to give racial preferences that punish white and Asian students while promoting black and Hispanic students:

There is a lot of push-back on "affirmative action" and Asian students are suing Harvard claiming to have been discriminated against based on their race, with more qualified Asian students being passed over for less qualified black and Hispanic students. This is a way to get around overt racial selection by calling it something else. The goal is quite overt, namely changing the demographics of incoming freshmen classes to pump up the number of non-white and Asian students.

An adversity score of 50 is average. Anything above it designates hardship, below it privilege.

So if someone is deemed to be "privileged", a word that is almost always linked to being white, it sounds like that would actually hurt your chances of getting in. Not just providing a boost to minority students but putting the boot to white and Asian students.

What this means is that if you follow the American dream, work hard and become successful, your children will be punished by losing spots at elite universities in favor of less qualified students because you are too successful and therefore your kids are "privileged". It is like the NFL draft where the worse you perform in the prior season, the better your draft position which leads to "parity", aka mediocrity. That makes sense for a sports league, not so much for a society.

Nowhere is it questioned whether this makes sense or not. The goal is a numbers game: more black and Hispanic students is an unqualified good.

At Florida State University, the adversity scores helped the school boost nonwhite enrollment to 42% from 37% in the incoming freshman class, said John Barnhill, assistant vice president for academic affairs at Florida State University. He said he expects pushback from parents whose children go to well-to-do high schools as well as guidance counselors there.

“If I am going to make room for more of the [poor and minority] students we want to admit and I have a finite number of spaces, then someone has to suffer and that will be privileged kids on the bubble,” he said.

What is worse, this isn't even helping black students. Black college students already have abysmal graduation rates and general college performance, so adding even more black students is just setting up more young black adults to not graduate and end up with a bunch of debt and wasting years they could be learning job skills. I posted this story about a year ago with an important graph, Participation Ribbon Egalitarianism Has No Place In Education. 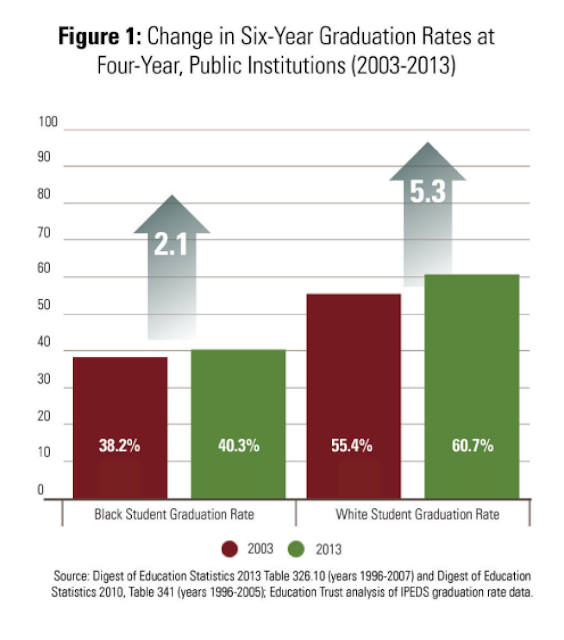 For white students, only 3 out of 5 have completed their degree six years after starting, which of course means that almost 40% of students start school and likely never complete a degree, and many of them have nothing to show for it other than student loan debt. No one lists on their resume "Completed 4 semesters of college". For black students it is even worse with 3 out of 5 students failing to complete their degree in six years, and if you haven't completed a degree in six years the odds are you never will. Schools like the University of Michigan have a staff of almost 100 and spend $11 million a year in their "diversity office" but in the case of blacks the majority of them attending college don't graduate.

What this tells us is that there are already too many kids going to college and there are especially too many under-prepared or simply unqualified black kids going to college. They get in and then they don't complete their university education. That isn't helping anyone except diversity officers and admissions officials at colleges who can brag to their colleagues about their highly diverse incoming freshman class.

The dirty secret of college is that we have too many kids going to school in the first place. There is a lot of talk about that issue. The really naughty secret that we are not allowed to even discuss is that we are admitting too many unqualified and ill-prepared students that are disproportionately black and Hispanic.

If we want to tackle "privilege" and "income inequality" we should be having a serious conversation about the best way for black and Hispanic students to move out of generational poverty and into the middle class. Learning a trade worked for white Americans for many years. Going into a 4 year degree program that you won't graduate from is doing more harm than good. Part of being a dissident in this political world is accepting reality, and dealing with issues as they really are rather than what we wish they would be. Unfortunately as the College Board is demonstrating, most of our "elites" still stubbornly dwell in a fantasy world and we all suffer for their delusions.
Posted by Arthur Sido at 12:18 PM