Being A Nice Guy

This weekend Vice President Mike Pence spoke at the commencement for Taylor University. Taylor is a Christian school in my home state of Indiana and is pretty open about their commitment to Biblical principles. How well they adhere to that is not my business and I am not really sure but it is a defining characteristic of the school and that characteristic shouldn't be a surprise to anyone that chooses Taylor as their college out of all of the college choices in Indiana.

Mike Pence is the Vice President of the United States. He is the former Governor of the state of Indiana. He served in the United States Congress representing the people of his district in the House of Representatives. He was born in Indiana, went to college in Indiana and then law school in Indiana. He turns 60 next month and has spent virtually all of his life here in the Hoosier state apart from his tenure as Vice President starting in January of 2017. So he is the quintessential Hoosier.

More pertinent, he is also very outspoken about his Christian faith. It is his faith and the fact that he takes it seriously that causes such backlash from leftists. Pence specifically takes unpopular stances on issues of homosexuality and that simply cannot be allowed. Even though he is the nicest guy around, he is the bogeyman of the homosexual left. Peter Buttpirate, the sodomite mayor of South Bend, Indiana and media darling Democratic presidential candidate, has been waging a one sided "feud" with Pence, who has never said much of anything about Buttplug. Pence is the convenient piñata of the left to whip up their followers. To hear them talk about Pence, he is only moments away from rounding up the gays and sending them to concentration camps.

You wouldn't expect Pence to get invited to speak at Smith College or Evergreen or some other bastion of liberalism and homosexuality. Taylor on the other hand seems exactly the sort of place that Pence would be invited to speak, an openly and avowedly evangelical college in Pence's home of Indiana. That shouldn't be controversial but this is 2019 and everything is controversial. Right on cue, during the commencement speech a couple dozen graduates walked out before Pence spoke. They were hella mad because Pence is mean to the gays.

Laura Rathburn was one of the dozens to walk out, disappointed that the school's administration picked Pence to address her class. Rathburn decorated the top of her mortarboard in rainbow colors and added a message on top that said, "Ally Visible For Those Who Can't Be.”

“I think his presence makes it difficult for everyone at Taylor to feel welcomed,” she said.

The handful of students got a ton of attention from the press that loves to take shots at Pence and especially in the case of the Indy Star loves to push Peter Buttpirate as a serious candidate, even though his qualifications amount to a) mayor of the 4th largest city in Indiana and b) gets sodomized by another man. This photo ran on the Indy Star story. 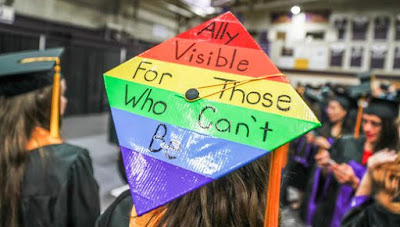 Is there any group in America that is more visible, painfully and irritatingly so, than homosexuals? You have to be delusional to think they are not "visible". More importantly, Taylor has a pretty clear stance on the issue of the gays. On their "Distinctions & Beliefs" page, Taylor takes a clear stand in favor of the traditional Christian understanding of human sexuality and describes homosexual behavior alongside other sexually deviant behavior like fornication, adultery, pedophilia, prostitution and incest. It has always been the Christian understanding that homosexuality is a perversion no different than being a pedophile or engaging in bestiality and Taylor specifically affirms this...

The biblical design for human sexuality demands sexual faithfulness for married couples (Exod. 20:14; 1 Cor. 6:13-20) and chastity for those who are single (1 Thess. 4:3-8). All premarital and extra-marital sexual activity (e.g., fornication, adultery, incest, prostitution, homosexual behavior, and all sexual activity involving children) is immoral. And all use or involvement with pornographic materials is sinful, as are all forms of sexual abuse, exploitation, and harassment (1 Cor. 6:9-10; 1 Tim. 1:9-10).

There is absolutely nothing vague or unclear about this. It isn't hidden, it is right on their website. If you don't agree, then you can go to a different college. We have lots of them in Indiana where sexual perversion is celebrated. Taylor just isn't one of them.

It isn't like Taylor invited someone like Barack Obama or Hillary Clinton who clearly are not Christians in any sense of the word. Pence is a pretty standard issue generic evangelical Christian, the same kind of Christian that sends their kid to Taylor because it is supposed to be a Christian school. Parents and students choose Taylor and Liberty and other schools like these specifically because they affirm traditional Christian teaching and there isn't anything much more clearly taught in Christianity than the sinful and disordered nature of homosexuality. If you realize this and decide to go to Taylor anyway, then at least have the courtesy of keeping your yap shut about it, just like you don't go to a Jewish or Islamic school and start demanding they serve bacon in the school cafeteria. But for some reason young leftists, especially homos, have made it their mission to seek out people that don't buy into their fetish and demand that they submit to and wildly celebrate their deviancy.

Pence is proof that it doesn't matter how hard you try to be nice and polite to these people. They still hate you. To be more specific and this is an important point:

They don't hate you because of anything you have done, they hate you simply for what you are.

Mike Pence epitomizes what the Left hates. He is a decent Midwestern man, mocked for never being alone with a woman other than his wife. He is white. He is heterosexual. He is unapologetically Christian and his faith informs his politics, just as what is important to every other person informs their politics. When you combine that all together, you create the ultimate boogeyman for the Left and they hate him even more than they hate Trump. Trump's big flaws, he is rude and egotistical and narcissistic, are things they loved about Obama. Pence on the other hand is hated because he appears to be genuine and committed to everything they hate.

You can't placate these people, you can never be kind enough or courteous enough, you can never be sufficiently fair in your dealing with them, to make them not hate you because they hate your very existence and they want to see you dead. Sure we should be kind and generous and polite because it is the right thing to do but never make the mistake of thinking that you can defeat this enemy by being the nicer guy. The old saying is true, nice guys finish last and finishing last in this contest means extinction.
Posted by Arthur Sido at 11:36 AM