Ah, the heady days of the 2016 campaign in the Republican primaries. A cluster of generic empty suit Republicans, Marco and Kasich and Jeb. It was like choosing the lobster from the tank at a restaurant. One of these guys was going to lose gracefully to Hillary, the only question was which one would be the designated sacrificial lamb. It was painful to watch.

But one man stood apart. He said stuff so many people were thinking. He talked about putting America first and securing our border and getting us out of stupid foreign entanglements. He mocked Democrats and rivals alike, setting aside the silly rules that Republicans have been handcuffed with for decades. He didn't always know what he was talking about but at least he was talking about stuff that mattered to people who didn't live inside the DC Beltway or work in corner offices in Manhattan.

I really miss that guy.

Now we have this guy instead:


I am continuing to monitor the situation in Venezuela very closely. The United States stands with the People of Venezuela and their Freedom! pic.twitter.com/rtGfjQjc1u
— Donald J. Trump (@realDonaldTrump) May 2, 2019


Great! Here was my response:

Why don't you monitor the southern border of your own country or the streets of America where anitfa are running wild? Screw Venezuela.

Why in the world are we looking to get into yet another foreign conflict that is a no-win situation? Have we learned nothing? Apparently not because for all of his rhetoric to the contrary, Trump has surrounded himself with neocon warmongers like John Bolton, whispering in his ear to start a new war like Gríma Wormtongue. Nothing good can come from intervening in a substantive way in Venezuela's civil war or whatever is going on.

Meanwhile back in America, our own civil war is rapidly going from cold to hot and the man that is supposed to be our advocate is MIA thus far besides a few random tweets. An actual independent journalist, a gay Asian one no less, is assaulted by antifa not because he is some "far-right" goon, but because he dares to report what is really happening.

I was sprayed in the face point blank with pepper spray outside the @CiderRiot, where Antifa had amassed. They cheered as I was blinded. Before that, they threatened me & brought up my mother’s name. A woman helped me across the street. Please help me identify person: pic.twitter.com/BUxlk94fz4
— Andy Ngo (@MrAndyNgo) May 2, 2019


Portland police are pointedly not doing a damn thing about it. This is the future of America, masked morbidly obese women marching in the streets in Communist parades.


Portland’s #MayDay was a celebration of Marxism, socialism & communism. It called for violence against border enforcement & even the destruction of the U.S. I will upload footage that I recorded in chronological order. #antifa pic.twitter.com/PAtFjNcCcc
— Andy Ngo (@MrAndyNgo) May 2, 2019


Oh, and Trump's supporters are being systematically shut out of the critical institutions of a modern republic, especially social media and financing.


Right-wingers are being purged from the internet, banned from donation platforms & their personal banks, defamed by the media, physically threatened & attacked, barred from visiting countries. How much more does censorship have to escalate before you step in? @realDonaldTrump
— Brittany Pettibone (@BrittPettibone) May 2, 2019


People like Paul Joseph Watson are lumped in with lunatic Louis Farrakhan and banned as "far right". Has anyone seen the company Farrakhan keeps? He is pals with every major Democrat out there. But according to reputable news source The Atlantic, Calypso Louis is just another "far-right extremist". I am surprised they didn't call him a "white nationalist" since that term is meaningless when "journalists" use it. 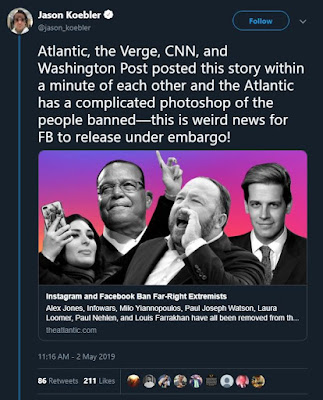 Meanwhile Trump is crowing about the collusion narrative falling apart and getting roped into a new war in Venezuela. The border is being overrun, Commies are attacking people in the street and his supporters are being shut out of social media. He is oblivious.

This is turning out to be one of the greatest bait-and-switch acts in American political history. Americans thought they were electing an America First populist but instead got a slightly less useless Jeb Bush.

Yes I know Trump is better than Hillary but is that our standard now? As long as you aren't as awful as the alternative you are doing great? Yes Trump made two good picks for the Supreme Court but those candidates were selected for him. Ted Cruz would have made picks at least that good. Four years will go by with virtually nothing done at the border. How many more illegals will have entered the country in those four years? A million? Two million? More? How many children of illegals that magically became American citizens because their mom successfully snuck into the country will turn 18 between election day 2016 and election day 2020? How many older white voters will have died of old age in that time period? They ain't making more middle class white voters but there is an unlimited supply of angry and resentful children of illegals turning 18 every day.

How does Trump think he is going to win re-election in 2020?

Maybe he doesn't care.
Posted by Arthur Sido at 5:48 PM