So this happened right here in the Hoosier state this weekend:

The story is pretty much what you would expect, the trooper had a car pulled over on suspicion of drunk driving. While he was finishing up the arrest, the trooper's car was struck by a different vehicle. He went to check on the other car and the driver hit the gas to try to get away but was stuck and couldn't move. The driver of that car was also arrested. So a DUI twofer!

The first driver got charged with the following: Operating While Intoxicated (OWI) .15% B.A.C, OWI Endangerment, OWI per se, Driving While Suspended Infraction and Speeding

The second driver got this: OWI Endangerment, OWI with a B.A.C. over .08%, and Failure to Yield to Stationary Emergency Vehicle

What I found amusing about this were the players.

The arresting officer's name is Ala’a Hamed. He seems like a decent guy, there is another story about him saving the life of a motorist who had a heart attack and he talks like anyone from Indiana but he is pretty clearly Middle Eastern of some sort.

The first driver stopped is Mario Rodriguez, operating a vehicle while intoxicated and with his license suspended.

The second driver is Ashley Brown, from Hammond, IN. I looked around and was not surprised to see her mugshot: 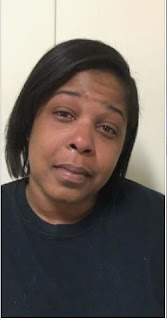 So we have a Middle Eastern cop pulling over a drunk Hispanic guy and then having his car hit by a drunk black woman. It sounds the beginning of a bad joke.

Our new America is gonna be lit!