A Mass Shooting Near A College And Crickets From The Media

Whenever there is a shooting at a school or university, the media goes crazy. Well, it goes crazy as long as the shooter(s) fit the desired profile. When the perpetrators are the wrong sort of characters for the media? It doesn't get much attention, like the recent school shooting in Colorado featuring a girl (Maya McKinney) who thinks she is a boy, and her father Jose Evis Quintana is a Mexican illegal alien who has been deported twice, and Devon Erickson, a homosexual 18 year old registered Democrat who hated Christians and Trump and appeared in court with his hair dyed purple. He looks like he is going to have a swell time in the state penitentiary. What is the going exchange rate of cigarettes for scrawny white homos in the state pen? What appears to be his car had a pentagram and "666" spray-painted on it.


Car towed from #stemshooting suspect's home apparently has "F*** SOCIETY" spray painted on the side. Also "666" and a what looks like a pentagram sprayed on the hood. pic.twitter.com/e6QX3lq4v3
— John Fenton (@higuysimjohn) May 8, 2019


At a memorial service for the slain student, Kendrick Castillo, the event turned into a political rally by gun control advocates and hundreds of students walked out, furious that the memorial was being turned into a photo op for gun-grabbers. I wonder if that girl Maya, who thinks she is a boy, will demand to be incarcerated in the male prison? That would be a barrel of laughs, I am guessing her "transitioning" is going to be magically put on hold.

A mentally ill "trans" girl with the twice deported illegal alien father and a homo Democrat who hated Christians shooting up a school isn't going to get any new guns laws passed, so as you would expect, this story went down the memory hole.

The same seems to be happening here in Indiana with a mass shooting in Muncie, very close to the campus of Ball State. We are told over and over that "mass shootings" are an exclusively white male thing even though shootings that are classified as "mass shootings" are actually predominantly carried out by a certain demographic (see this short vid from Colin Flaherty debunking that narrative). When I first saw the story, I was clued in to what was actually going on and that it wouldn't get much attention because it was described as a shooting at a "house party". House party is code for a party where the partygoers are vibrantly diverse, in the same way that any story where you read about "teens" rampaging is telling you that the "teens" in question are part of a specific demographic. The shooting in Muncie was exactly what you would expect.

Seven people were shot in the incident. That makes it a mass shooting by the accepted measure. One young man died, 17 year old Daymarr Kennedy. The alleged shooter has been arrested, 19 year old VaShaun Harnett. The deceased young man, who again was a 17 year old minor, has a Facebook page (still up at this point), that includes this profile picture: 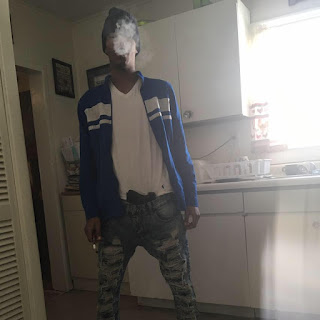 A 17 year old posing blowing smoke with a pistol in his waistband (always a smart way to carry a gun). His profile includes a picture of a blue bandana, which was the sign of the L.A. gang the "Crips", as well as multiple pictures of him making gang signs, his middle finger raised or making a pistol gesture at the camera with his fingers. Looking through his posts and the posts of his friends is a journey through bizzaro land. One of his friends is lamenting that he can't believe he is gone. What did you expect was going to be the end result of a 17 year old posing with guns and making gang signs on social media? One picture of him flashing gang signs led to a string of illiterate comments including a black guy who looks to be in his 30s threating Daymarr, who was 16 at the time, and Daymarr threatening to kill him and friends of Daymarr posting stuff like this: 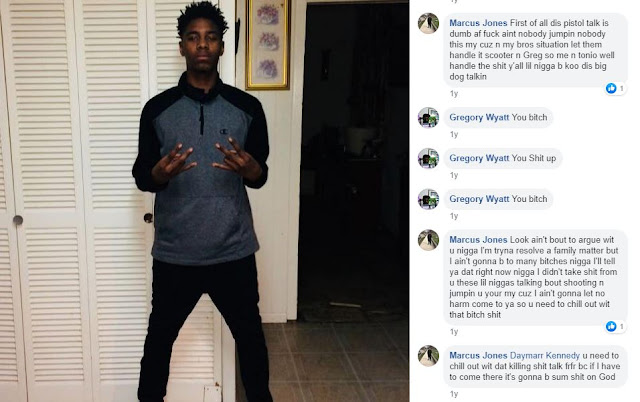 Again, what did his friends think was going to happen in his life? He was going to become a doctor or an engineer? He was headed for a lifetime in jail or an early grave. Reports from the news indicates that Daymarr and his alleged killer had a long running beef that finally boiled over at this party. For all of his tough guy poses with the guns and gang signs, now he is dead at 17. His life was probably never going to end any other way, either with Daymarr dead or him in and out of jail until he killed someone. 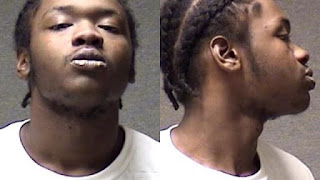 Wow, what a total bad-ass! Nothing tells the world what a tough guy you are quite like being a 19 year old who shot 7 people (nice shooting Tex), one is dead and one is in pretty bad shape and might die. So this fella is looking, at a minimum, of one count of murder, six counts assault with a deadly weapon and/or attempted murder, using a handgun which was certainly illegal in the commission of crime, plus who knows what else. Bonus, even though he murdered a minor, he is an adult so he is looking at a possible death sentence or "best" case scenario the better part of the rest of his life in prison. Just another day in America. Rinse. Repeat.

I spent a little time wandering around the friends and friends-of-friends of the accused killer and the victim using the wife's Facebook account. It was a dystopian social media nightmare. The level of sheer degeneracy, idiocy and dysgenic breeding was grotesque. All of the males seemed like wannabe gangsters of some sort, all of the girls looked like they were still in high school, used atrocious grammar and language and a significant chunk of them had already been knocked up once. Many of the girlfriends were apparently white but their posting were scattered with attempts to sound ghetto with lots of the use of "nigga", which I thought was a no-no for white girls.

As I started out with, this sort of "mass shooting" never gets much attention. Seven people were shot, one is dead (a 17 year old), one is in critical condition. The national news paid no attention. Had this been a 19 year old white kid who shot 7 people at a school, it would be all over the national media for days on end. Speeches would be made. Legislation would be demanded from that little twerp David Hogg as he continues to bank on the murder of his classmates. We would be asked to have a "national conversation". When a VaShaun murders a Daymarr, it just isn't very interesting to the media. The local Indiana media covers it for a short time, only because it happened fairly close to Ball State, but otherwise it is just another black-on-black shooting, just the latest in the endless killing that makes up over 50% of all murders in the U.S. committed by a small percentage of the population. No one cares about that or the wreckage these killings leave behind at enormous social cost. If I am interpreting the Facebook grammatical wreckage correctly, it looks like Daymarr's girlfriend is pregnant. Now the baby daddy is dead.

Yet another reminder that the media lies to you. It lies through omission of stories and facts. It lies by emphasizing some news at the expense of other news to advance an agenda. Sometimes it just outright lies to you. Nothing you hear is trustworthy, every bit of news you get is twisted and turned and spun for the advantages of someone else.

When you understand this, you start to question everything you have been told. When you start to ask questions, you begin to see what is really going on.
Posted by Arthur Sido at 8:37 AM