The death penalty is one of the most controversial and least understood aspects of the criminal justice system. Execution has long been the ultimate penalty for the most heinous crimes. It is used (too) rarely and convictions and death sentencing kicks off decades of appeals, meaning you are often in more danger of dying of old age on death row than you are being executed by the state.

I saw the news today that New Hampshire overrode the veto of Governor Sununu and in doing so joined the growing number of states to ban the death penalty:

What is interesting is that New Hampshire hasn't actually even executed anyone since 1939 according to the story. This is not really surprising, New Hampshire is consistently ranked among the top three safest states in the U.S. in terms of violent crime, right behind fellow New England states Maine and Vermont. New Hampshire is over 90% white with about a 1% black population. Vermont is even whiter at over 94% while Maine is considered the whitest state in the Union at nearly 95%. This will come in to play in a moment. These states are so white, in a nation that was founded by whites and has always been majority white, that the New York Times ran a piece last year lamenting how white New Hampshire is: Being Too White Is A Problem That Must Be Solved: The New York Times And The Quest To Diversify New Hampshire. Imagine a newspaper running an essay complaining about how black Detroit or Baltimore is.

So the move to abolish the death penalty in New Hampshire centers around the lone inmate on death row, a black habitual criminal named Michael "Stix" Addison, who murdered a white police officer Michael Briggs. According to this story from the Boston Globe, officer Briggs knew Addison and at one juncture had perhaps saved Addison's life:

Briggs knew Addison. Several years earlier, he had been the officer on scene when Addison was shot, and he had tended his wound. He was aware now that Addison was coming off a crime spree with a friend and that both were wanted in a shooting. But Briggs could not have known of the threat Addison made when friends told him the police were searching for him: He had vowed to shoot.

Again, Addison was a lifelong criminal. Boo-hoo he had a tough childhood. He was in the midst of a crime spree. He declared that he would shoot the cops looking for him. He murdered a cop doing his duty in cold blood. This officer, Michael Briggs, is dead leaving behind a wife and two sons. 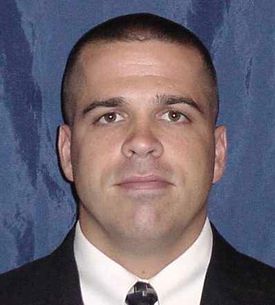 Addison became a potent symbol to both sides. Opponents of the death penalty pointed to him as an example of the racial disparities in a system where 34 percent of people put to death nationally since 1976 have been black, according to the Death Penalty Information Center , while only 13 percent of the country’s population is black.

And the second one:

Cushing and other repeal advocates cite the enormous financial cost of capital punishment, with millions of dollars poured into endless appeals that can turn killers into celebrities. They talk about the impossibility of removing human error from the judicial process, and they point to the exonerations of death row inmates proven innocent by advances in DNA analysis and other scientific testing.

They also raise the stark racial inequities in how the death penalty is applied. More than a third of defendants executed in America since 1976, when the Supreme Court reinstated the death penalty, have been black, according to the Death Penalty Information Center, even though only 13 percent of the American population is black. And a person who kills a white victim is disproportionately likely to be put to death — more than three-quarters of victims in cases resulting in execution were white, according to the information center, even though only half of murder victims nationally are white. New Hampshire is 94 percent white.

What is missing from both statements is a pretty commonly known fact and is the source of a popular meme and twitter shorthand: 13/50. Nationally blacks indeed make up about 13% of the population, however blacks also account for over 50% of the murder in the United States. In some cities like St. Louis almost every murder is committed by black men, who only make up half of that 13% so it is more like 6.5% of the population commits over half of all murders.

In general, the only crime that carries the death penalty these days is murder. So if a small percentage of the population, less than 7%, commits over 50% of the murders in the country, it stands to reason that the aforementioned small percentage of the population will be wildly overrepresented on death row because they are wildly overrepresented in committing murder. In fact, since only about 34% of the people executed since 1976 are black, but blacks commit 50% of the murders, they are actually underrepresented on death row. The argument that the death penalty is racist is false on its face, blacks are on death row because they committed murder.

One other thing that jumped out at me from those quotes is this:

Cushing and other repeal advocates cite the enormous financial cost of capital punishment, with millions of dollars poured into endless appeals that can turn killers into celebrities.

I couldn't agree more. It is ridiculous that it takes so long to execute convicted murderers. I read this morning that a man (a white man no less!) who committed murder in 1991 is set to be executed today, more than a quarter of a century later.


That is ridiculous. From arrest to trial to conviction to execution should be done in under two years. We don't need to eliminate the death penalty, we need to drastically expand it and speed it up. Child molesters, violent rapists, people convicted multiple times for drug dealing. I would add a whole slew of crimes to the list of death penalty eligible infractions. Selling fentanyl and get caught for the second time? Quick trial, reasonable appeal if warranted and then out you go to the gallows. Molest a 7 year old kid? Same thing, short rope, tall tree.

This nation is in deep trouble.
Posted by Arthur Sido at 4:56 PM