Thoughts on the NRA Controversy

As I mentioned last night, my wife and I were at the NRA Annual Meeting yesterday in Indianapolis. It was a great opportunity for us, as an NRA member I get in for "free" although parking downtown in Indy is ridiculously expensive but was conveniently located if you skipped the "semi-official" parking lot miles right off the expressway but miles away from the center. We parked in a garage right across the street from the convention center for $5 more. Since we were carrying about 90 pounds of catalogs and brochures, it was $5 well spent.

Anyway, while we were there pawing guns like Bill Clinton on an intern, the actual business meeting was going on. I didn't attend although maybe I should have. I don't know enough about the political infighting. It sounds like there was a clash between (now former) NRA President Oliver North and long-time NRA executive director Wayne LaPierre and North lost. He is out. It seems to me like there are some serious issues internally at the NRA and some financial shenanigans as well. The NRA is a huge organization with lots of money and that attracts people who take advantage of it. You see this in anyplace where there is money, businesses and civic organizations. People steal from local Girl Scout troops and churches, you know people exposed to million dollar accounts might get sticky fingers. Not even open theft but the sort of things that are being accused, like extravagant travel and wardrobe expenses and leveraging NRA contracts for personal contracts. The board is meeting on Monday for a scheduled event so hopefully they can get this squashed because it is causing hard feelings and everyone knows Trump and the GOP need a strong, unified gun lobby in 2020.

A bunch of gun rights "experts" on social media are clamoring for people to abandon the NRA. Rather than supporting a flawed group, you should instead join another gun rights group like Gun Owners of America. Vote with your wallet and all that. I have a proposal for those people: 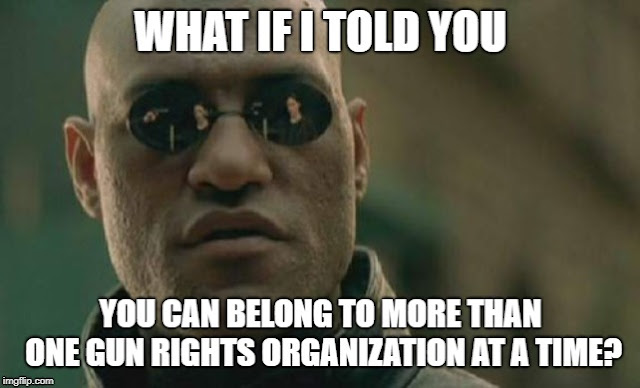 I get being upset at the NRA, the internal squabbling is unseemly and unhelpful and the endless fund-raising emails and letters can be annoying. But the NRA is the largest and the most effective gun rights organization in the world. You can tell this is true because of the endless sniping from gun-grabbers. They know who has the best lobbying organization, the best grassroots political groups, the most Congressmen on speed dial. Plus the NRA does a lot of other stuff very well like local shooting events. So I am a member of the NRA and I have no plans on dropping my membership. I agree for the most part with this editorial: Why NRA Members Should Not Publicly Attack NRA For Perceived Wrongs.

Having said that, I also joined Gun Owners of America because we need every voice we can fighting for our rights. A GOA membership is only $20. An NRA membership is only $45 and you can often get a reduced rate, like the $30 rate through hickok45's link. So for $50 per year, less than a buck a week in a nation where people often spend hundreds per month on cell phones, cable and internet, you can join both groups and increase both group's ability to fight for your Second Amendment rights.

People on the political Right spend so much time punching right that we barely have any energy left to combat the Left. Liberals love this internal fighting among gun owners. Every minute we spend fighting with each other, we aren't fighting them. For the Left, all of their plans require a disarmed population. While we snipe at each other and divide our attention, they are laser focused on disarming us so they can do whatever they want without resistance. Destroying this nation and the people that built it so they can replace it with a globalist tyranny is their religion. They eat, sleep and breathe oppression and hatred for liberty. We must match their focus and their drive. We outnumber them by a huge margin but that means nothing when we spend all of our time tearing down our allies via endless purity spirals. Yes, we must hold these groups accountable but we must support them nevertheless.

If you can afford a single coffee from a store each week, you can belong to the NRA and the GOA. Do it today.
Posted by Arthur Sido at 11:54 AM