The Land Of Look At Me

As all normal people were lamenting the burning of Notre Dame, far too many people saw it as an opportunity to bang the drum for their own pet causes. I don't have much to say right now about the actual fire but I would like to note the weird phenomena of people that can't even give others a moment to express their own feelings.

First Trump, a man incapable of not weighing in on any event, sent out a tweet expressing how horrible the fire was and then making the weird but harmless suggestion of using flying water tankers to put it out. That is pretty common in forest fires but wouldn't work here for a number of reasons. That didn't stop the court jester of "conservatism" from using the heart-wrenching events in Paris as his backdrop for making a dumb joke at the President's expense. 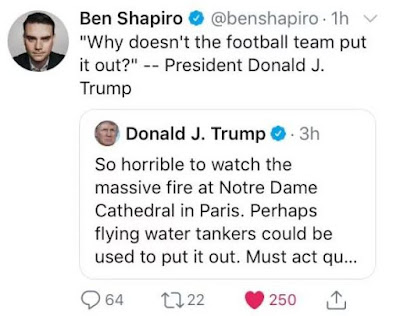 Oh, that is some comedic gold Ben! No wonder everyone thinks you are so clever when "owning the libs", code for "verbally defeating college kids". If a synagogue was on fire, I wonder if he would be amused at someone using that event as the setting for making a joke. He got ripped up and down for it so he deleted his tweet quickly but the internet remembers. So then he started tweeting conciliatory tweets about our "Judeo-Christian" heritage. That ruffled some other feathers so weasel Bill Kristol who still maintains he is the One True Savior of Conservatism replied back with this comment: 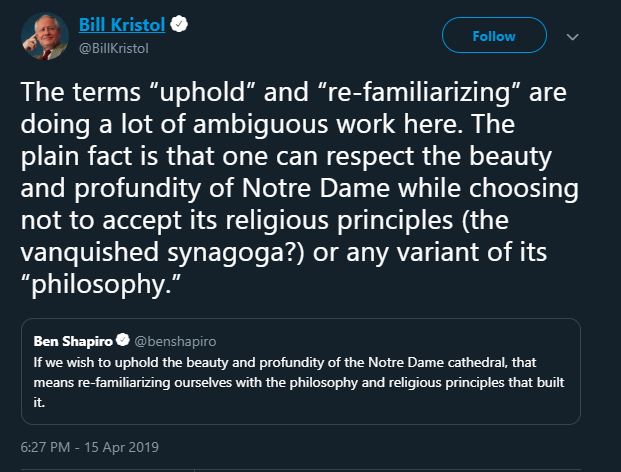 Nice that he put philosophy in snarky scare quotes. So as Notre Dame smolders, we have two Jewish guys arguing about the significance of one of the most significant Christian edifices in Western civilization in relation to centuries old religious conflicts between Christians and Jews. You can't make this up.

Others were gleeful about the "karma" of Notre Dame burning, some sort of cosmic retribution for French colonialism (that brought civilization to otherwise backward places). If so, karma isn't terribly timely as the French haven't been a colonial power for a long time and it sort of seems that they got their payback in World War I and II. I am not an expert on karma. Some even suggested that all of Europe was built by black people, a variation on the notion that white people in America just sat around on the porch while black people did all of the work and invention in the U.S.. Like for example self-proclaimed "thinker" Jamil Khan here: 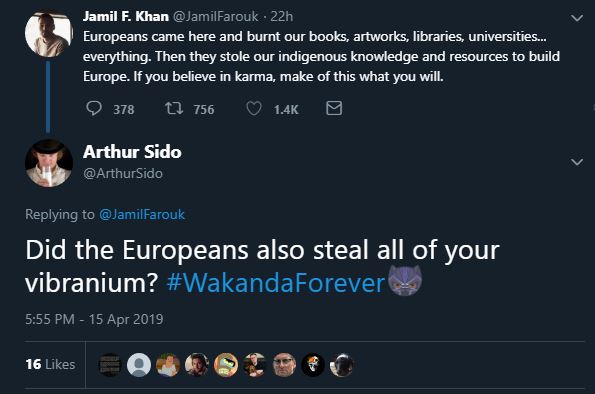 I think he really believes that Africa was full of universities and libraries when European discovered Africa and that these raiders stole all of the knowledge and culture of Africa and appropriated it to create Western Civilization. Meanwhile, Africans apparently were unable to replicate what they had already created and have lagged far, far behind the rest of the world ever since. Also weird that the super advanced Africans were so easily conquered and colonized by the backward Europeans. A topic for another day perhaps.

Where this got really weird was in the "woke" church movement. Instead of Christians lamenting the horrible events which should grieve anyone claiming the name of Christ, some decided to instead take the opportunity to drone on about their own oppression. Duke Kwon is an Asian SJW "pastor" endlessly complaining about racial intolerance. The person he quotes, a black woman going by the handle of "dee2roe", real name apparently DeeDee Roe, is no one I had heard of before but she seems pretty angry. 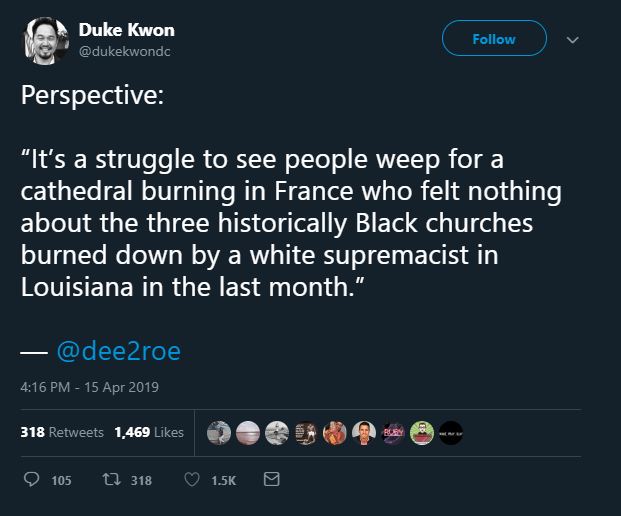 As a note, the guy arrested was trying to impress a girl he met on Facebook that was a self-described satanist and he was into "black metal" so burning churches seemed to be his weird way of impressing her, like John Hinckley shooting Reagan to impress Jodie Foster. I guess that makes him a "white supremacist", unlike the black guy in Mississippi who burned his own church.

So some churches in Louisiana were burned and got some coverage in the US. A guy was arrested. Meanwhile a cultural icon with almost nine centuries of history is burning with worldwide live coverage. Notre Dame has been visited by tens or hundreds of millions of people, it is where Napoleon's coronation was held and he was married. Henry VI of England was crowned in Notre Dame. It has survived the French Revolution and two World Wars. It held many Catholic relics which, while not authentic in any sense, are still icons of great significance to Catholics and to European culture. But hey, take this opportunity to publicly bitch and moan. If I were a suspicious type I would suspect that the fact that Notre Dame was built in a European nation by European men was the real source of her anger. Duke seems to find this very profound.

Anyone who is a parent of more than one child has observed the behavior of children when another child is getting some attention and they aren't.

Older Brother Tommy: "Mommy, I got a gold star on my spelling test!"

Mother: "That is great Tommy, I am so proud of you!"

Little Sister Suzie: "Look at me mommy, I am standing on one foot!"

Mother: "Just a second sweetheart, Tommy is telling me about his spelling test"

It is common behavior for kids and most of them outgrow it but obviously many adults never got past that point. A significant chunk of the loudest voices on social media feel that any attention paid to something other than their pet issue is a grave insult to them. Like spoiled children they assume that if you are paying attention to someone else, it is because you hate them. Also it suggests a callous disregard for what anyone else finds important. A 900 year old architectural monument, priceless and irreplaceable, isn't really on the same level of significance as a local church in Louisiana.

Folks, it really is OK for people to mourn something that you don't care about. It doesn't mean your cause is being neglected. Can we all try to grow out of the pre-school mentality that demands constant attention and reinforcement?
Posted by Arthur Sido at 3:33 PM